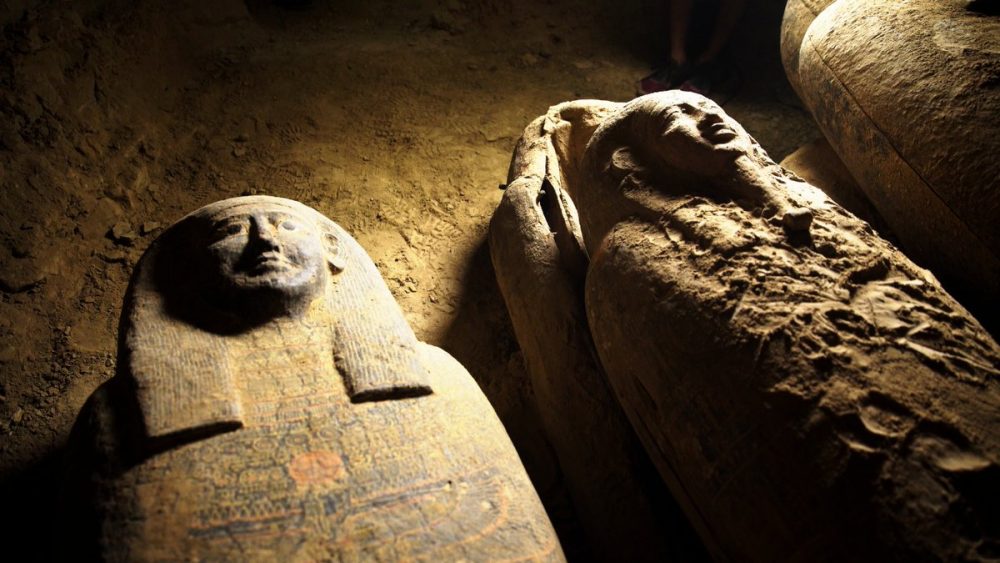 The intricately decorated sarcophagi have remained untouched and undisturbed for 2,500 years after they were laid to rest, some 11 meters beneath the desert floor.

An unusual collection of at least 13 wooden sarcophagi dating back 2,500 years have been discovered at the necropolis of Saqqara, not far from Egypt’s first stone pyramid, the Step Pyramid of Djoser.

Although previous archeological missions have unearthed a series of ancient sarcophagi dating back even further in history, what makes the recent discovery so important is the fact that the 2,500-year-old sarcophagi have remained intact throughout millennia, remaining completely sealed, just as they were when they deposited some 2,200 years after the construction of the Step Pyramid of Djoser.

In a statement detailing the discovery, the Egyptian Ministry of Tourism and Antiquities explains that the ancient sarcophagi were found inside burial pit 11, approximately 11 meters beneath the desert sand.

The sarcophagi were stacked one on top of the other, and all retain the original color in which they were painted in astonishing detail, in the distant past.

Inside the cavity, three sealed niches were also found.

Minister Khaled Al-Anami said there are probably more sarcophagi to be discovered there and that future excavations will tell.

The uniqueness of the discovery also resides in the fact that many of the tombs of Saqqara were looted in distant times. Therefore, discovering a series of untouched sarcophagi dating back 2,500 years is of great importance to archaeologists and Egyptologists, who hope to understand more about the burial site where the discovery was made.

Saqqara is also interesting since not only royals and kings are thought to have been buried there. Although the latter are more likely to be found due to their elaborate tombs, recent excavations have shown that people from the middle and working classes also buried their deceased at the necropolis.

The names and identities of the people buried in the sarcophagi, removed in recent days, are still unknown. But excavation work at the site continues, and this information is expected to be released soon, as well as the total number of sarcophagi that still remain buried beneath the surface.

Egypt reopened cultural tourism to museums and archaeological sites on September 1, which means we can expect more announcements of this tendency in the coming days and weeks, as the government works to renew tourist interest after the coronavirus pandemic.

Saqqara, home to the first stone pyramid of Egypt, is also home to the Serapeum, as well as a series of other temples, tombs, and pyramids built throughout the long history of ancient Egypt.

Djoser’s Step Pyramid is considered one of the most revolutionary monuments built in the history of Egypt, forever changing architecture in Egypt and paving the way for a more complex and elaborate style of monuments such as the first smooth-sided pyramid and eventually, the greatest of them all, the Great Pyramid of Giza, thought to have been built during the Fourth Dynasty reign of King Khufu.