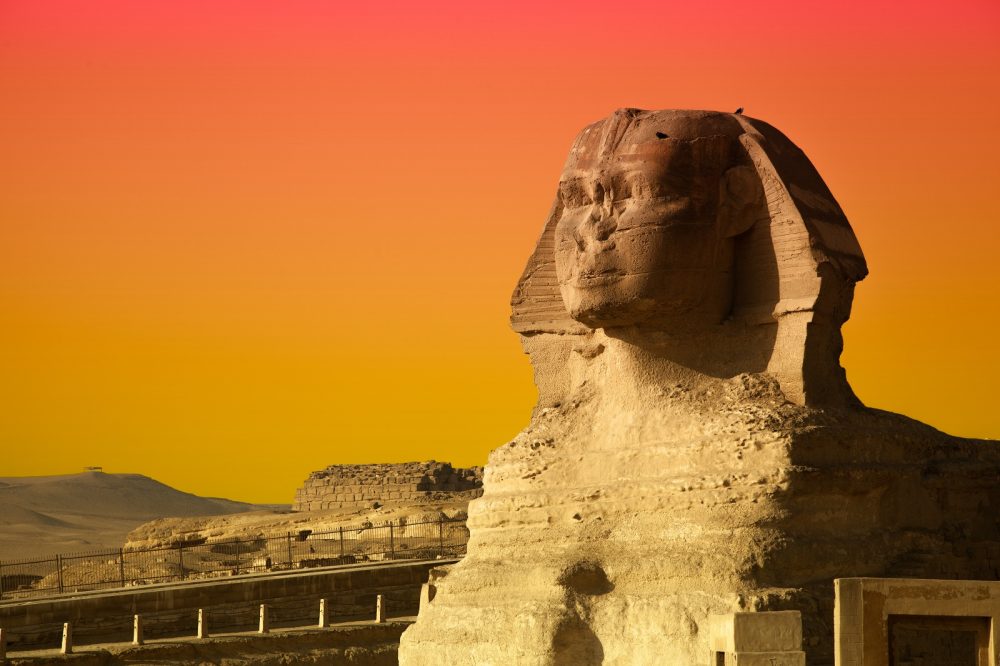 The building of the Great Sphinx is usually attributed to either Khafre or his older brother Redjedef (Djedefre).

The Great Sphinx at the Giza plateau is the largest most ancient monolithic statue anywhere in the world.

No matter where you decide to look, you won’t find a monument like the Great Sphinx of Giza. The statue faces from West to East and was carved on the Giza Plateau west bank of the Nile.

Measuring 73 m (240 ft) long from paw to tail, the Sphinx stands an imposing 20 m (66 ft) high from the base to the top of the head and 19 m (62 ft) wide at its rear haunches. It is acknowledged as the oldest and largest statues on the planet. And there is not one Sphinx similar to it.

The best part is, we know very little about it.

We know its older, really old. Egyptologists usually agree that the Sphinx was carved by the ancient Egyptians during the Old Kingdom, just when Pharaoh Khafre ruled over Egypt. Other scholars suggest a possibility that the Sphinx was crafted by Khafre’s older brother Redjedef (Djedefre), commemorating their father, Khufu.

But the idea that the Sphinx dates back to the reign of Khafre is just a theory, a hypothesis based on surrounding excavations of various temples, and the composition of the Giza plateau.

Just as there isn’t any evidence how who, or why the pyramids at the Giza plateau were built, we don’t have any historical texts that tell us anything about this imposing statue.

Even though we refer to it today as the Sphinx, it is impossible for us to know that its creators called it when they completed it thousands of years ago. The Great Sphinx is so mysterious that there isn’t a single known inscription of the old Kingdom explaining the construction phase of the statue nor its original purpose. Medieval Arab writers call the Sphinx balhib and bilhaw, indicative of a Coptic influence. The modern Egyptian name given to the Sphinx is Abū al Hūl which translates in English to The Terrifying One.

And this is one of the most puzzling features of the Great Sphinx of Giza, which may indicate the statue itself predates the reign of Khafre.

The idea that Khafre may not be the man behind the Sphinx was best explained by Selim Hassan writing in 1949 on recent excavations of the Sphinx enclosure:

Circumstantial evidence mentioned by Hassan includes the Sphinx’s location in the context of the funerary complex surrounding the Second Pyramid, which is traditionally connected with Khafre.

Taking into consideration its surroundings

In addition to its causeway, the Pyramid and the Sphinx, the entire complex includes both the Sphinx and Valley Temple, both of which share a similar design in term of their inner courts.

According to experts, the Sphinx Temple was crafted with stones that were removed from the Sphinx enclosure. But the stones for the valley temple were quarried from the plateau, and some of the stones weigh more than 100 tons.

But then again, this circumstantial evidence is just a conglomeration of assumptions and thoughts by different authors and Egyptologists, resumed, compressed into one single theory.

It is pretty dear that the 4th Dynasty builders created the Sphinx, its temple, and the Khafre Valley Temple as a continuous architectural landscaping project. The ancient quarrymen created a U-shaped ditch, freeing a block from which they carved the Sphinx.

They took the stone away in huge blocks that formed the cores of the walls of the Sphinx and Khafre Valley temples. They completed the walls with a casing of red granite from Aswan and finished the floors with white Egyptian alabaster.

Plenty of other studies were done on the Sphinx in the last few decades and most of them conclude, based on the surrounding temples and design elements, as well as the rocks used in the construction of some of these temples, that the Sphinx was built during the singular construction phase commissioned by Khafre.

Swiss architect-Egyptologist, Herbert Ricke, studied the Sphinx Temple between 1967 and 1970 and concluded that it was created along with the Sphinx and the Khafre Valley Temple as part of the same quarry and construction process.

Just a decade later, in 1980, Thomas Aigner a geologist from the University of Tubingen reinforced the idea postulated ten years before by Ricke, based on the study of the geological layers in the Sphinx and each of the 173 core blocks in the Sphinx Temple.

Already in 1910 when the Sphinx temple was beneath 15 meters of debris, Uvo Holscher, the excavator of the Khafre pyramid temples already recognized that the Sphinx and Valley Temple were built concurrently.

And if the Great Sphinx of Giza was there before Khafre, which at this point is a possibility, then we have to ask ourselves how old is it?

The Sphinx and the Mokkatam Formation

The Sphinx statue wasn’t transported. As mentioned before, the entire statue was carved on site. Geological studies of the Sphinx eventually revealed that the monument was directly carved from the natural limestone of the Mokattam Formation.

In order to free the massive block of stone that would later be shaped into the Sphinx, the ancient quarrymen had to dig deep into the lower layers of the Mokattam Formation.

Eventually, the block for carving the Sphinx oriented East-West came to be in a ditch opening to the East where the builders had already dug out a broad lower terrace.