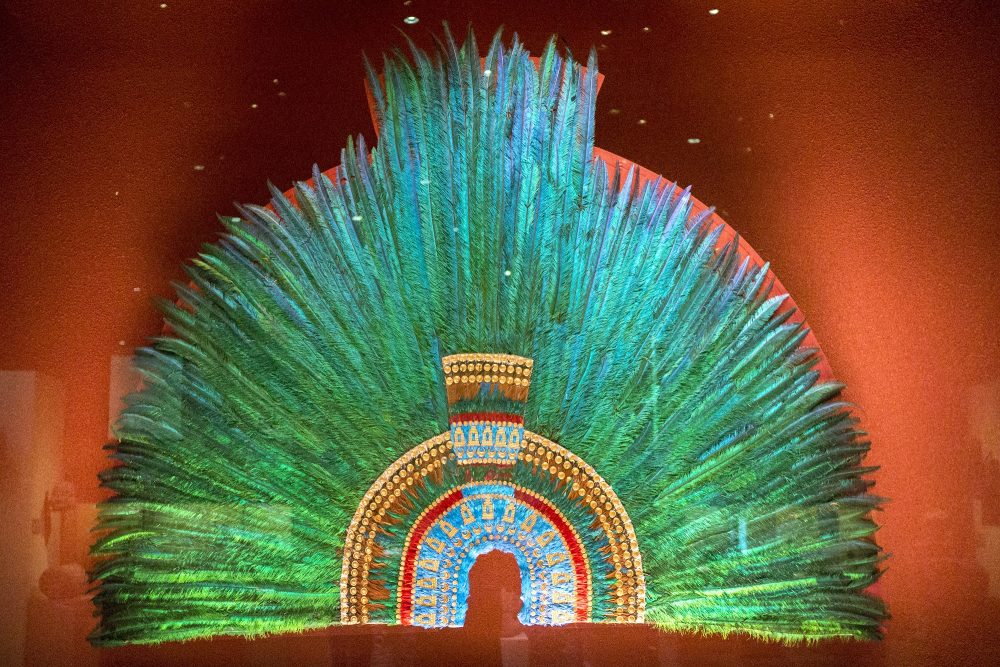 Archaeology is a tool used by mankind to peer into the past. It helps write history, and from time to time, it rewrites it.

One of the most fascinating places on Earth—considered a treasure trove of history—is without a doubt present-day Mexico.

Home to countless advanced civilizations such as the Olmec, Maya, and the Aztecs, studying the past of this North American country has resulted in countless treasures that are thousands of years old.

(The featured image shows the headdress).

Moctezuma’s plume or headdress is a featherwork crown that belonged to the famous Aztec ruler Moctezuma II, the man who met Hernan Cortes as the Spanish ventured into Tenochtitlan, the capital of the Aztecs. The headdress is made of quetzal and other feathers with sewn-on gold detailing. The headdress is currently located is exhibited in the Museum of Ethnology in Vienna. Gien the fact that it is in a very deteriorated state, it is unlikely to be returned to Mexico, who has already asked for it to be returned.

A representative figure produced in turquoise from the 15th century, it is exhibited in the British Museum in London. In the pre-Hispanic culture, Tezcatlipoca is the lord of heaven and earth, source of life, guardianship, and protection of man, the origin of power and happiness, owner of battles. He was a central deity in the ancient Aztec religion, and his main festival was the Toxcatl ceremony celebrated in the month of May.

This is one of the more interesting objects (personally) as the mask is meant to represent Quetzalcoatl, the most important deity of the ancient Aztecs—known to the Maya as Kukulkan. The mask was produced in the 15th or 16th century. It is inlaid with turquoise and obsidian. It measures 17.3 by 16.7 cm and is currently on display in the British Museum. The mask was created by two intertwined and looped serpents that were depicted by contrasting colors of a turquoise mosaic, one in blue, the other one in green.

This is believed to be an ancient Mexica (Aztec) sacrificial knife dating back from the 15th or 16th century. The handle of the object is saved from a single piece of wood and is shaped in the form of a crouching man wearing the headdress of a typical Aztec Eagle warrior.

This striking double-headed serpent was likely a ceremonial object worn by Aztec priests during sacrifices or other religious occasions. It is carved in wood and covered in a beautiful turquoise mosaic. The serpent played an essential role in Aztec mythology and religion. The Aztec spoke Nahuatl, and their world for the serpent was coatl. This is associated with many serpent deities such as Quetzalcoatl—the feathered serpent, Xiuhcoatl—the fire serpent, and Mixcoatl—the cloud serpent.

The stone figurine of Chalchiuhtlicue

This is, without a doubt, one of the most important Meica artifacts in existence. The Coatlicue sculpture, located in Mexico City’s National Museum of Anthropology, stands over ten feet tall. It is believed to date back from the 15th century and was carved out of basalt, measuring 2.57 meters in height. The towering sculpture again reaffirms the worship of the coatl in the Mexica religion as several snakes are carved on its surface.