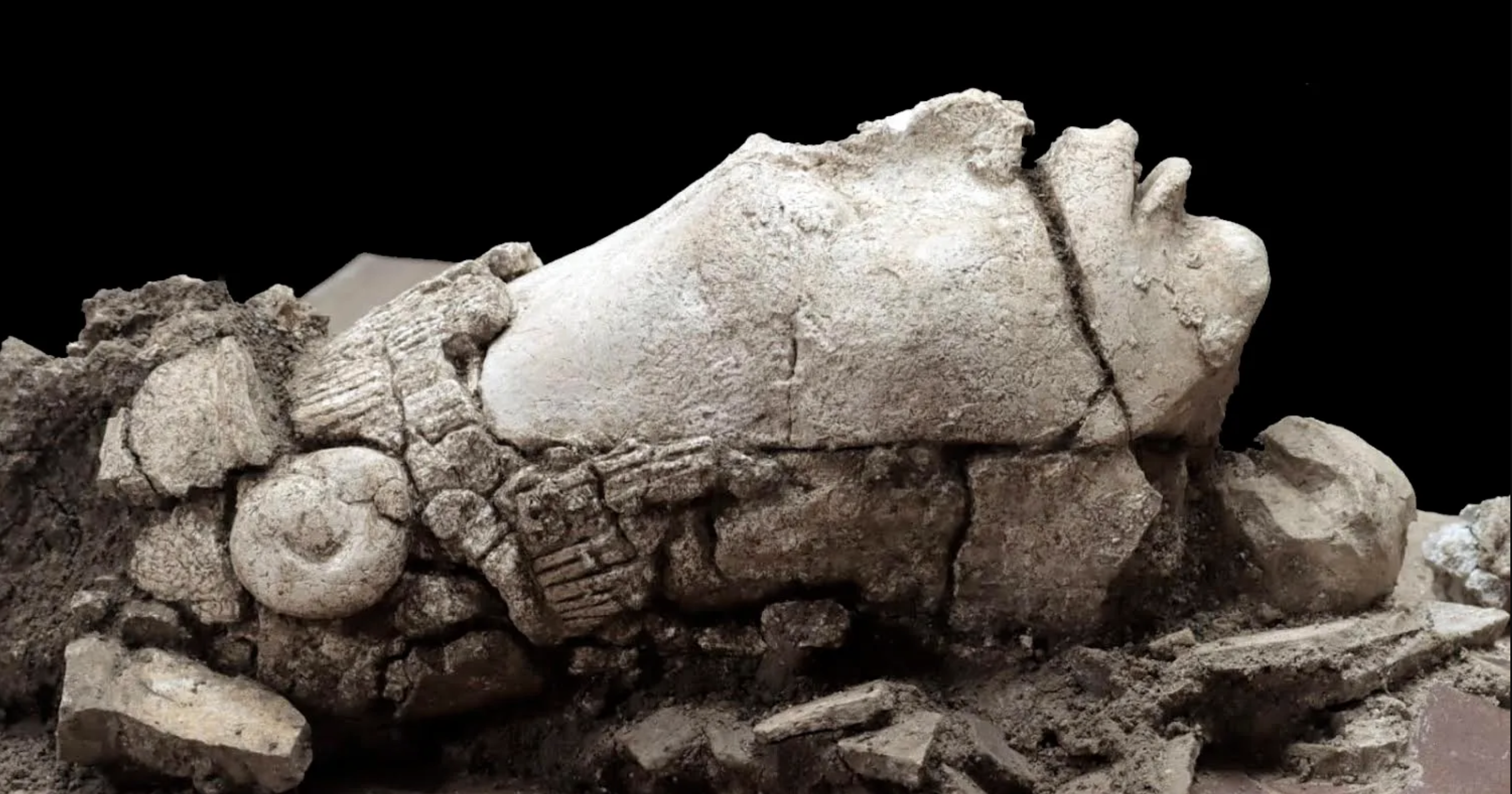 A statue of the ancient Maya god of corn —maize— was discovered in the ancient city of Palenque. According to researchers, the stuccoed statue shows a pronounced elongated head and is believed to be around 1,300 years old.

A stuccoed statue of the Mayan maize god, believed to be more than 1,300 years old, was found during conservation work in a corridor of the building known as El Palacio in the ancient city of Palenque, Mexico.

Experts from the National Institute of Anthropology and History (INAH) discovered a representation of Nal, the young corn — maize — god in the Archaeological Zone of Palenque, in Chiapas.

This is the first discovery at the site of a stuccoed head of an important deity of the Mayan pantheon.

As reported by the INAH, the discovery took place during the 2021 season of the “Architectural Conservation and Decorative Finishes of El Palacio” project, financed by the U.S. State Department’s Ambassadors Fund for Cultural Preservation.

According to archaeologist Tomás Pérez Suárez, ancient Maya myths are evidence of the importance of corn, pointing out that humankind was created from corn according to the Maya civilization creation stories, which would explain the existence of a deity linked to maize.

The “Corn God” is depicted with the curious characteristics of a young man with a pronounced cranial deformation without any animal traits. It is a very human representation, experts reveal.

According to legends, and despite being associated with life and creation, the Mayan maize god performs various rites in the underworld. Nal travels in a canoe navigated by the rowing gods, is dressed by naked young women, and finally germinates from the shell of a tortoise, a symbol of the earth.

In this last act, he appears flanked by two gods (Hun Ajaw and Yax B’alam), who are believed to be the version of the hero twins (Hunajpu and Xb’alanke) of the Popol Vuh, sons of Hun Junajpu.

In ancient Maya inscriptions, Nal was associated with the number 8 (waxak), so he was likely considered the “patron saint” of this number. He, too, must have been the tutelary god of the day k’an, the fourth day of the ritual calendar, which represents a grain of corn.

In the codices, this glyph appears on the headdress of the deity, and from it, the plant germinates. Although we have numerous representations, his name is not fully known. The hieroglyph that accompanies the images of him in the codices has been read as Nal (corn).

An entrance into the underworld

In July of 2021, an interdisciplinary team co-led by archaeologist Arnoldo González Cruz and Haydeé Orea Magaña observed stones that were carefully aligned while removing the fill from a corridor that connects the rooms of House B of El Palacio with those of the adjacent House F. Inside a semi-square receptacle —made up of three walls— and under a layer of loose soil emerged the nose and half-open mouth of the maize god.

As the investigation progressed, it was found that the sculpture was the axis of a rich offering that was placed on a pond with a floor and stuccoed walls —approximately 1 m wide by 3 m long—to emulate the entrance of the corn god to the underworld, in an aquatic environment.

“The discovery of the deposit allows us to begin to understand how the ancient Maya of Palenque constantly relived the mythical passage about the birth, death, and resurrection of the deity of corn,” reveals the researcher from the INAH Chiapas Center, Arnoldo González Cruz.

The archaeologist and his colleagues Carlos Varela Scherrer and Wenceslao Urbina Cruz explain that the stuccoed head was placed in an east-to-west orientation, which would symbolize the birth of the corn plant with the first rays of the sun.

An ancient Maya god with an elongated head

The sculpture, which must have been modeled around limestone support, has elegant features: the chin is sharp, pronounced, and split; the lips are thin and projecting outwards—the lower one slightly downwards.

The cheekbones are fine and rounded, and the eyes are elongated and thin. From the wide, long, flattened, and rectangular forehead, a wide and pronounced nose was sculpted. Another significant vestige is the fragments of a tripod plate on which the sculpture was placed since it “was originally conceived as a severed head.”

Such an idea arises when contrasting the iconography of the young maize god in other pieces and documents, such as a series of plates from the Late Classic period (600-850 AD), a vessel from the Tikal region, from the Early Classic period (150-600 AD). ), and representations in the Dresden and Madrid codices, in which this deity or characters linked to it appear with their heads severed.

González Cruz explains that the archaeological context is the result of several events: the first consisted of the use of the pond as a mirror of water to see the cosmos reflected.

Later, perhaps in the reign of the latter, they shut that space in a symbolic way, breaking a portion of the stucco floor of the pond and removing part of the construction fill to deposit a series of elements: vegetables, animal bones, shells, crab, worked bone fragments, ceramic pieces, three fractions of miniature anthropomorphic figurines, 120 pieces of obsidian blades, a portion of a greenstone bead, two shell beads, as well as seeds and snails.

The placement of these elements was constituted concentrically and not by layers, covering almost 75% of the pit, which was sealed with loose stones. Some animal bones were cooked, and others had meat marks and tooth prints, so they were used for human consumption as part of the ritual, the researchers explained. A limestone slab with a small perforation — 85 cm long by 60 cm wide and 4 cm thick — was placed on top of the offering, but not before “sacrificing” the tripod plate, which was almost broken in half and a portion, with one of its supports, was placed in the hole in the slab.

Then came a semicircular bed of potsherds and small stones, on which the head of the deity was placed, which was supported laterally with the same materials.

Finally, the entire space would be closed off with earth and three small walls. This would have left the head of the young maize god inside a kind of box, where it remained hidden for around 1,300 years.

Due to the fact that the piece was found in an environment with lots of humidity, it is currently in the process of gradual drying, after which it will be restored by experts.