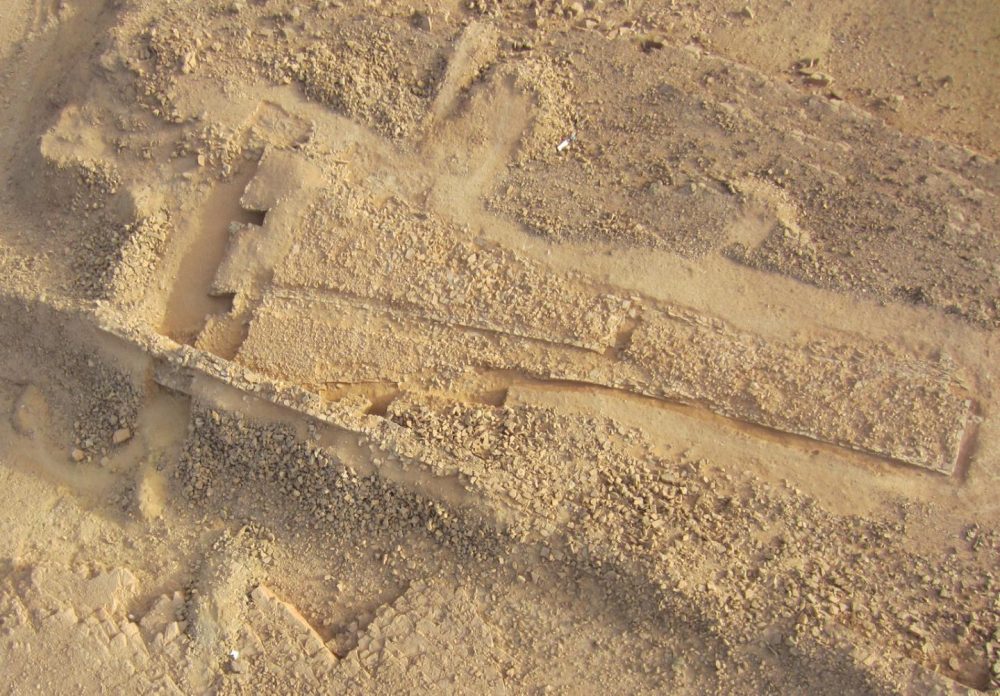 The 35m-long stone platform is believed to have been constructed in the mid sixth millennium BC.

Archaeologists have discovered a massive monument. Excavations have revealed a triangle-shaped stone platform believed to date back around 8,000 years in Northern Saudi Arabia.

The ancient structure, which consists of a triangular-shaped platform measuring some 35 meters in length, was found during archeological excavations at a site in the Dûmat al-Jandal oasis, in northern Saudi Arabia, archaeologists have revealed.

Believed to have been built in various phases like many other ancient structures, experts believe an ancient civilization erected the structure starting around the sixth millennium BC. Although much of its history is shrouded in mystery, and further excavations will be needed to fully understand the monument, archaeologists believe the triangular-shaped construction was likely used for religious ceremonies and rituals.

The discovery of the ancient monument was made by an international collaboration of scientists from France, Saudi Arabia, and Italy, led by Olivia Muñoz, a researcher at the CNRS, the official French National Center for Scientific Research.

The discovery of the triangular-shaped structure and the study describing its purpose were published in the Journal Antiquity.

“Excavation of the platform has yielded bioarchaeological and cultural remains, along with evidence for several phases of construction and intermittent use down to the first millennium BC. Analysis of the platform and nearby tombs highlights the persistent funerary and ritual use of this area over millennia, illuminating nomadic pastoralist lifeways in prehistoric Arabia,” the researchers wrote in the study.

The structure reaffirms that thousands of years ago people in the region were a religious society based on rituals. The discoveries made at the site offer an unprecedented view spanning back thousands of years into the past and are a symbolic imprint left by nomadic hunter-gatherers.

Unlike the prehistoric remains of the Near East, the megalithic monuments of Arabia remain largely unknown to experts. These monumental structures, made of dry stone walls, still hold many secrets in terms of their construction, function, and chronology, according to the researchers.

However, the discovery reaffirms that several thousands of years ago, advanced societies developed in the region and the Middle East. Evidence of that can be found in present-day Turkey, where supposed hunter-gatherers erected, over 12,000 years ago, a megalithic temple which is now considered the oldest on Earth.

As we see with the discovery in Saudi Arabia, developed societies came into existence sooner than initially thought. The first megalithic monuments emerged much earlier than the first-recorded cities on Earth.

This tells us that long-before people clustered into well-defined societies and built year-long settlements, we were capable of great construction projects which were built of lasting materials such as limestone and granite.

The Saudi Arabian discovery tells us to dig deeper, and further, for great things, remain buried beneath the surface.