There are many megalithic stones around the globe that are powerful tourism magnets. Many of them are ancient and were carved and worked thousands of years ago when history as we know it was not even written. One of th more curious examples is located in present-day Saudi Arabia, and we call it Al Naslaa. This massive stone is unlike any other on Earth, for it appears to be cut with laser-like precision.

The megalith, located at the Tayma Oasis appears as if it were split with a laser straight through the middle. In addition to the curious cut it appears to have suffered, the stone has been engraved with various symbols throughout history. Some of the more obvious are depictions of animals such as horses.

The history of Tamya spans back thousands of years into the past. The region where the stone stand today was inhabited since the early Bronze Age, as archeological excavations have clearly revealed. The region is a treasure trove of history. Ten years ago, a Saudi Commission from Tourism and Antiquities discovered a rock that bears the inscription of the Egyptian Pharaoh Ramesses III. But the history of the region spans back even further in history.

Searching the historical record we find that the oasis city of Tiamat appears in ancient Assyrian inscriptions dating back from the 8th century BC. In addition to an obvious rich history, the region is home to what many people argue is the most photogenic megalith on Earth.

But what really caused the rock to appear as if it were cut with a laser? The perfect slit between two standing stones is not the result of lost technology, nor should we blame aliens. I’m sure that if they exist and have visited Earth, they won’t try out their phases on random rocks. Right?

So, can nature really create such perfection? Of course it can, and there are many incredible sites across the world that appear as if they were taken from a movie. You can check out some pretty good examples here.

But if it wasn’t aliens and if ancient civilizations didn’t have lasers, how did the stone split with such perfection?

Although there are many theories, one of the leading suggests that the ground atop which the massive boulders sit shifted in the past.

The boulder is held in place in two positions. When the ground shifted, and one side moved, it may have caused the entire megalith to split in half, and when it split, it did so with style and a perfectly straight line, making sure that people in the distant future would visit it and come up with countless theories trying to explain how Al Naslaa got its curious cut.

Another hypothesis that could explain the curious pattern is pressure cracks. In fact, we can see a parallel crack just right of the split. The pressure crack may have pushed some of the stone, creating not only a crack but its nearly perfect precision.

A third-placed option would be a minor fault line. Faultlines are known for creating weakened zones that erode much faster than the surrounding rock.

Al Naslaa is anything but a deeply studied monolith, and the biggest reason for that is because its crack is natural, and there’s not much to lock at, at first glance. But this is not the case, Al Naslaa offers more than just a mystery.

Despite geological theories explaining how the rock got its perfect crack, people can’t overlook its degree of perfection. This (below) is a close up of the crack between the two halves, you can see why people may think that the rock was split with a laser-like device.

The crack in between the two halves really seems almost as if done on purpose. However, it may not have always looked so perfect. When the stone cracked and one megalith became two, the fissure may have been far from perfect. But in time, with sand and powerful wind blowing in between the two sides, the crack may have been polished out. However, summa summarum, no one really knows for certain, and the real reason behind this incredibly precise split has yet to be determined, at least officially.

But that’s what makes the rock formation such a beauty. It offers an incredible view, it is engraved with ancient symbols many of which remain undeciphered, and then it has its massive laser-like cut going straight through the middle, giving rise to more questions than answers. It is noteworthy to mention that the symbols on its surface are probably entirely unrelated to the crack separating the two halves.

So, next time you are in Saudi Arabia and are looking for places to go, make sure to add Al Naslaa to your bucket list and visit the stage rock formations for yourself. 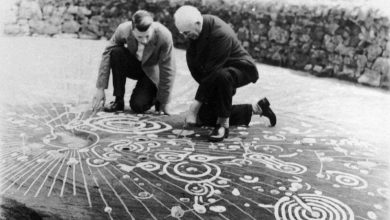 A 5,000-Year-Old Cosmic Map? The Mysterious Symbols of the Cochno Stone