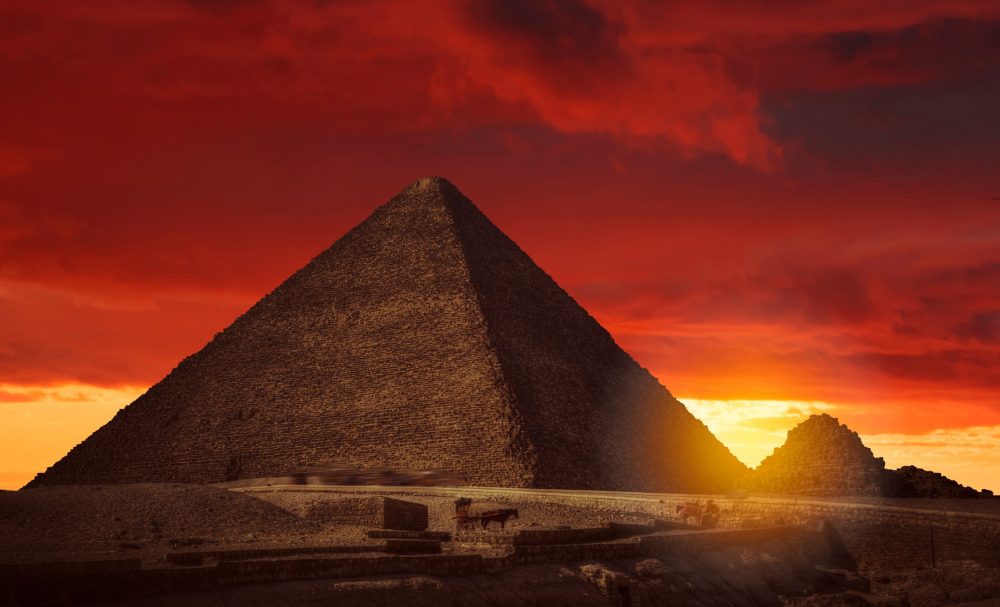 An ancient pyramid, an ancient wonder; the Great Pyramid is an ancient mystery.

The Great Pyramid of Giza–the largest of the three ancient Pyramids at the Giza plateau–is a building worthy of gods. Not only is this massive pyramid impressive because of its incredible size, but those who visit it are also left awestruck because of its alignment, precision, and incredible history which has been shrouded in mystery probably since the time the pyramid was built.

The exact date when the pyramid was completed is a mystery on its own, and a subject debated among many scholars and authors. Nonetheless, Egyptologists usually agree that the largest of the Giza Pyramids was completed some 4,500 years ago when Pharaoh Khufu reigned over the land of Egypt.

This discrepancy is due to the fact that there aren’t really many historical details about King Khufu. The only completely preserved portrait of the pharaoh is a three-inch high ivory figure that was found in a wrecked temple pertaining to a later period in Egyptian history. All other reliefs of Khufu have been found in pieces. Most of his alleged structures are entirely ruined, except, of course, the Great Pyramid of Giza.

Most of what we do know about Khufu comes directly from the discoveries that have been made at the Giza plateau and documents that appeared much later in ancient Egyptian history. The documents we have and make reference to Khufu were written by either ancient Greek or Egyptian scholars around 300 BC, a long time after the Pharaohs ruled Egypt.

Nonetheless, the Great Pyramid is an ancient jewel; the only standing ancient wonder of the world. Although it is thousands of years old, the pyramid stands proud and tall towering over Egypt’s golden sands. All in all, nearly everything associated with Khufu comes down to a complex form of “academic guesswork.” And the same guesswork applies to Khufu’s family.

Long before the Great Khufu

It is usually agreed upon among schiolars that Pharaoh Sneferu was Khufu’s father, although he may have been his stepfather as well. King Sneferu is perhaps one of the most famous Pharaohs in Egypt, and he was ancient Egypt’s greatest and most accomplished pyramid builder who constructed three of the most impressive and historically important pyramids of Egypt.

Khufu’s mother was probably Hetepheres I, although evidence is scarce. She was the wife of King Sneferu and is well known for her precious grave goods that have been discovered at the Giza plateau.

As you can see, when it comes down to the man who is supposedly responsible for commissioning the greatest pyramid Egypt has ever seen, we are faced with numerous uncertainties and a whole lot of archeological and historical guesswork. Isn’t it strange that we have so many missing pieces when it comes down to one of the most important dynasties of ancient Egypt?

Despite this historical oddness, we can piece together some of the puzzles that make up the ancient Egyptian pyramids.

It is believed that the pyramidomania in Egypt started with the reign of King Djoser and his young architect Imhotep. Djoser instructed Imhotep in building a massive monument at Saqqara, and Imhotep did not disappoint.

After designing and planning a structure that was meant to be unlike any previous one on Egypt, the young architect went to work and transformed a kind of square mastaba into a series of mastabas, stacked one atop the other, creating a structure of six steps and a height of around 60 meters.

This weird mastaba-atop-a-mastaba eventually resulted in the introduction of stone pyramids in Egypt. The 6-tier, 4-sided structure is regarded as the earliest colossal stone building in Egypt and the earliest large-scale cut stone construction. It was revolutionary not only because of the shape of the stone structure, but because the architect who built the pyramid and its pyramid complex used massive blocks of stone in the construction.

After Djoser, a number of Pharaohs ruled over Egypt and aspired to replicate the astonishing, and refreshing stone structure that Djoser built during his reign. Although many pharaohs attempted to built a step pyramid, it wasn’t until Pharaoh Sneferu when Egypt produced a second, kind of step pyramid.

Imhotep also built directly beneath the step pyramid a labyrinth of tunneled chambers and galleries that total nearly 6 km in length, and connect to a central shaft 7 m square and 28 m deep. The intricate underworld beneath the pyramid features hundreds of rooms. It was so large that never in the history of ancient Egypt did any Pharaoh manage and replicate the complexity and size of the underworld that was created by Djoser.

King Sneferu, who reigned over Egypt for either 24, 30 or 48 years around 2,600 BC was ancient Egypt’s greatest and most successful Pyramid builder. Sneferu is credited with building the pyramid at Meidum, the Bent Pyramid, and the Red Pyramid, both at Dahshur. Sneferu directly contributed to the ancient Egyptian pyramid design and introduced a number of historical changes that played an important role in future pyramid development in Egypt.

The Pyramid of Meidum is believed to have been an unsuccessful attempt of building either a Step-Pyramid or a smooth-sided one after numerous redesigns and revisions. The structure is believed to have collapsed during construction, although there are some who argue it was completed, and it collapsed in later times.

Sneferu’s Bent Pyramid at Dahshur is a unique example of early pyramid development in Egypt. This pyramid is also considered the structure which laid down the architectural elements needed to produce the first smooth-sided pyramid: The Red Pyramid.

Also referred to as the North Pyramid, Sneferu’s Red Pyramid is the largest of the major pyramids at Dahshur and ancient Egypt’s third-largest pyramid after the Pyramid of Khufu and Khafre.

Most importantly, the Red Pyramid is considered ancient Egypt’s first successful attempt at constructing a true, smooth-sided pyramid. Located around one kilometer from the Bent Pyramid, Sneferu’s most impressive pyramid directly laid down the necessary foundations for the construction of the Great Pyramid of Giza.

Sneferu was succeeded by (his son?) Khufu who is believed to have commissioned the pyramid very early in his reign. His royal vizier and architect Hemiunu was tasked with designing and building the pyramid.

Just as Sneferu’s pyramids were revolutionary during their time, the Pyramid of Khufu marked the peak of ancient Egyptian pyramid building.

Not only did Hemiunu manage to build a structure that would never again be repeated in Egypt, but he also made sure that the Great Pyramid of Giza stood the test of time. Ancient Egypt saw the construction of more than one hundred pyramids, but none of them was like the Great Pyramid at Giza.

A true wonder of the ancient world, the Great Pyramid is believed to have stood 146.7 meters high after completion. The massive pyramid was built with a total volume of 2,583,283 cubic meters (91,227,778 cu ft). To reach the—flat—summit of the Great Pyramid of Giza you need to climb a total of 203 steps.

The project of building the Great Pyramid required an abnormal amount of material. According to experts, some of the stones used in the construction of the pyramid—weighing over 20 tons—were quarried and transported as far away as Aswan, about 800 kilometers away from the construction site. Furthermore, it has been calculated that the builders of the pyramid made use of around 5.5 million tons of limestone, 8,000 tons of granite (from Aswan) and more than 500,000 tons of mortar. All of this, say Egyptologists, was achieved in no more than 20 years.

In fact, the largest granite stones in the pyramid–those within the King’s Chamber–weigh between 25 and 80 tons and were transported directly from Aswan.

Strangely, all of what we do know about the pyramid comes from contemporaneous texts or is usually the result of archeological guesswork and theories. To date, there has not been one ancient text that mentions the construction, planning, and design of any of the ancient Egyptian pyramids. The very first measurements of Khufu’s pyramid were made by Egyptologist Sir Flinders Petrie in 1880–82 and published in his workThe Pyramids and Temples of Gizeh.

The Great Pyramid was ancient Egypt’s greatest architectural accomplishment. The structure was so sophisticated and well-built that it remained the tallest man-made building on Earth for a period of over 3,800 years.

What is perhaps equally astonishing is that the perimeter to height ratio of 1760/280 Egyptian Royal cubits equates to 2π to an accuracy of better than 0.05 percent (corresponding to the well-known approximation of π as 22/7). This has led some Egyptologists like Miroslav Verner to write that “although the ancient Egyptians did not precisely define the precise value of Pi, in practice they used it.” Whether this incredible fact is a deliberate feature or not remains an enigma.

What we do know is that the ancient Egyptians created the most unique pyramid of all ancient Egyptian Pyramids. Among its many fascinating characteristics, it has been discovered that the Great Pyramid of Giza does not have four sides. The Great Pyramid is actually the only eight-sided pyramid out there. This is one of the many features of the pyramid not many people are acquainted with.

The weird eight sides of the Great Pyramid are a characteristic that was first documented and reported in La Description de l’Egypte in the late 1700s by Sir William Matthew Flinders Petrie, an English Egyptologist and a pioneer of a systematic method in archaeology and preservation of ancient artifacts. This unusual feature was spotted for the first time in 1940 by as British Air Force pilot, P. Groves, was flying over the pyramid and saw the depression on the Pyramid. He produced a stunning photo of the strange aspect of the pyramid. This unique feature can best be appreciated from the air, during the Spring and Autumn equinoxes.

“In the Great Pyramid the packing-blocks were laid in such a way that they sloped slightly inwards towards the center of each course, with a result that a noticeable depression runs down the middle of each face — a peculiarity shared, as far as is known, by no other pyramid” (The Pyramids of Egypt, 1975, p. 207).

Why the Great Pyramid of Giza was built with eight sides and not four remains one of the many unexplained features of this stunning ancient structure.