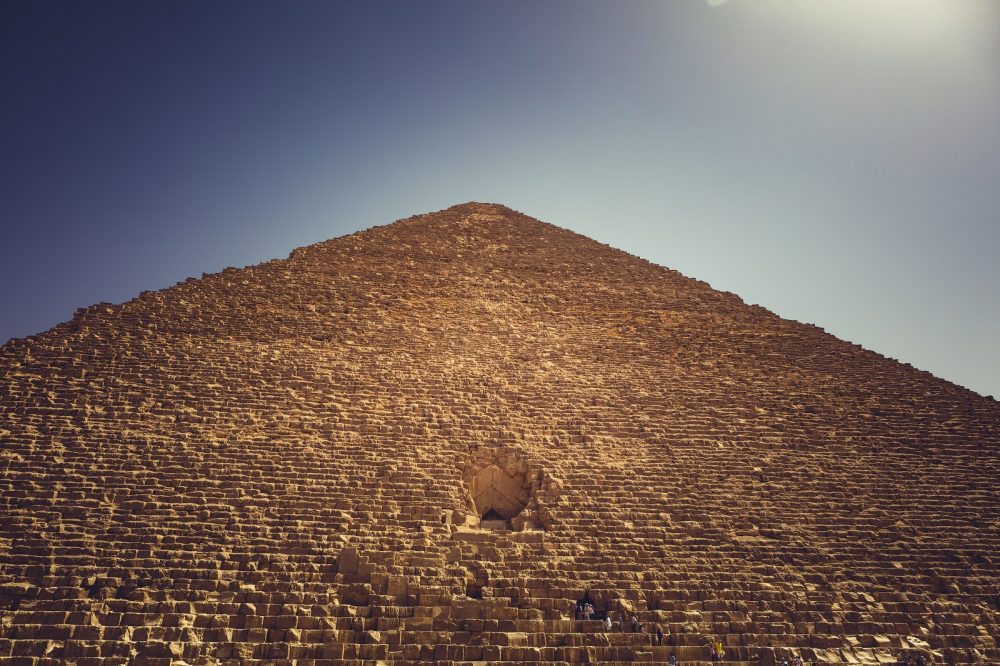 No other ancient monument on the planet’s surface has the ability to leave one breathless as the Great Pyramid of Giza.

For some people, it is the size of the pyramid that boggles the mind. To others, it is its intricate shape and mystical interior. Those who see the pyramid in a more mystical sense say that the structure wakens inside them emotions that they thought never existed.

However, there are others who say that the mystery alone surrounding the pyramid is baffling in its own way.

Whatever the case might e, the massive structure at the Giza plateau seems like a massive stairway to the sky. It is an ancient structure that seems to unite the cosmos with Earth.

As a kind of intermediary, the pyramid is thought to have been built in ancient times to house the Pharaohs’ eternal remains, helping him travel to the afterlife.

However, if you ask around about the exact purpose of the pyramid, not many people would agree that the Great Pyramid, and for that matter, all other ancient Egyptian pyramids, were built as tombs.

Whether this is because of the immense size of the pyramids, or because the most important ancient Egyptian pyramids were empty and the mummies of Pharaohs Djoser, Sneferu, Khufu, Khafre, and Menkaure were not inside their respected pyramids, the truth is people would rather see the pyramids as something greater than tombs, rather than accept the ideology set forth by mainstream scholars who remains convinced that the pyramids were tombs and only tombs.

To archeologists and Egyptologists, the Great Pyramid of Giza represents the culminative effort of Egypt’s pyramid builders. Not only is the Great Pyramid the largest monument of its kind ever built on the surface of the planet, but the great Pyramid of Giza irradiates and excellence of workmanship, the accuracy of planning, representing the beauty of proportion, which rightly places it as the chief of the Seven Wonders of the Ancient World.

This is perhaps why it has attracted such massive interest, not only in modern times but in ancient times as well. By the time of Pharaoh Tutankhamun, for example, the Great Pyramid of Giza was ancient already to the ancient Egyptians.

This extensive interest in the pyramid is perhaps why Egyptologists say the Pyramid was entered and robbed most likely at the fall of the Old Kingdom, during a period of weakness and unrest dubbed as the First Intermediate Period of Egypt.

As explained by scholars, there is very little we known about the Great Pyramid of Giza during the Middle Kingdom, and we can’t possibly know–due to a lack of records–whether or not the structure remained open or whether anyone closed it down. The silence regarding the Pyramids remained even during the New Kingdom. However, experts have found references made to “the sanctuaries of Khufu and Khafre,” although these were not necessarily the pyramids.

We know that Prince Khaemwese, the eldest son of Pharaoh Ramesses II, was very interested in the Memphis necropolis. He likely made restorations at the Giza plateau, just as he did with monuments located at Abusir and Saqqara.

Into the Twenty-sixth Dynasty, it is believed that “ancient traditions” were revived in Egypt, and people paid special reverence to the monuments erected during the Old and Middle Kingdom. However, because of a lack of records, it remains a mystery as to what the Kings of the time did for or to the Great Pyramid of Giza and its temples.

It has been estimated that when the casing of the Pyramid was complete, the pyramid contained around 2,300,000 blocks of stone, averaging around 2.5 tons. However, some of the stones used in the construction of the pyramid weighed well over 15 tons.

Its size is humongous, and many people feel that no mere description can do the Great Pyramid justice or convey the idea of its behemoth size.

Nonetheless, different scholars have worked on painstaking calculations throughout the years, comparing its bulk to other known monuments.

Some of these (1) calculations have revealed that the area of the base of the Great Pyramid of Giza could contain the cathedrals of Florence and Milan, St. Peter’s in Rome, and St. Paul’s Cathedral and Westminster Abbey in London.

But not even that comparison does the pyramid justice. (2) If all the stone of the Great Pyramid of Giza were sawed into blocks measuring I foot square, and these blocks laid end to end, they would stretch two-thirds of the way around the Earth at the Equator.

(3) During Napoleon’s historic campaign, after studying and seeing the Pyramids, Napoleon calculated that the Great Pyramid of Giza and its surrounding structure contained enough stone to build a wall 3 meters high and 1-meter thick, which would entirely surround the country of France. A mathematician corroborated napoleon’s calculations.

Its size truly is magnificent. However, (4) scholars have suggested that the Great Pyramid of Giza underwent several alterations in ancient times. They say that the pyramid was planned on a much smaller scale and that the builders decided to enlarge it before having finished the first “burial chamber.”

Therefore, they constructed an ascending passage, 36 meters long and just over a meter high which ends in what is incorrectly labeled as the Queen’s chamber. In reality, say Egyptologists, this was the original “burial” chamber of the pyramid in accordance with the enlarged plan.

After the second burial chamber had been completed, the builders once again changed their plans and enlarged the Pyramid. They built a third, higher “burial” room.

Although a relatively unknown feature among many, it has been proven that the Great Pyramid of Giza is the only eight-sided pyramid.

The eight sides of the pyramid were spotted and photographed for the first time by accident in 1940, when British Air Force pilot, P. Groves, was flying over the pyramid and noticed the concavity on the Pyramid.

However, I. E. S. Edwards wrote: “In the Great Pyramid the packing-blocks were laid in such a way that they sloped slightly inwards towards the center of each course, with the result that a noticeable depression runs down the middle of each face — a peculiarity shared, as far as is known, by no other pyramid” (The Pyramids of Egypt, 1975, p. 207).

The exact reason or purpose of the eight sides of the pyramid remains a debated subject. However, some have proposed that it gives the structure a much stronger structural integrity. It may have helped the pyramid withstand nearly everything history, nature, and humankind have thrown at it.

It remains unclear whether the eight sides of the pyramid were visible in ancient times when the pyramid was cased with highly-polished white limestone.