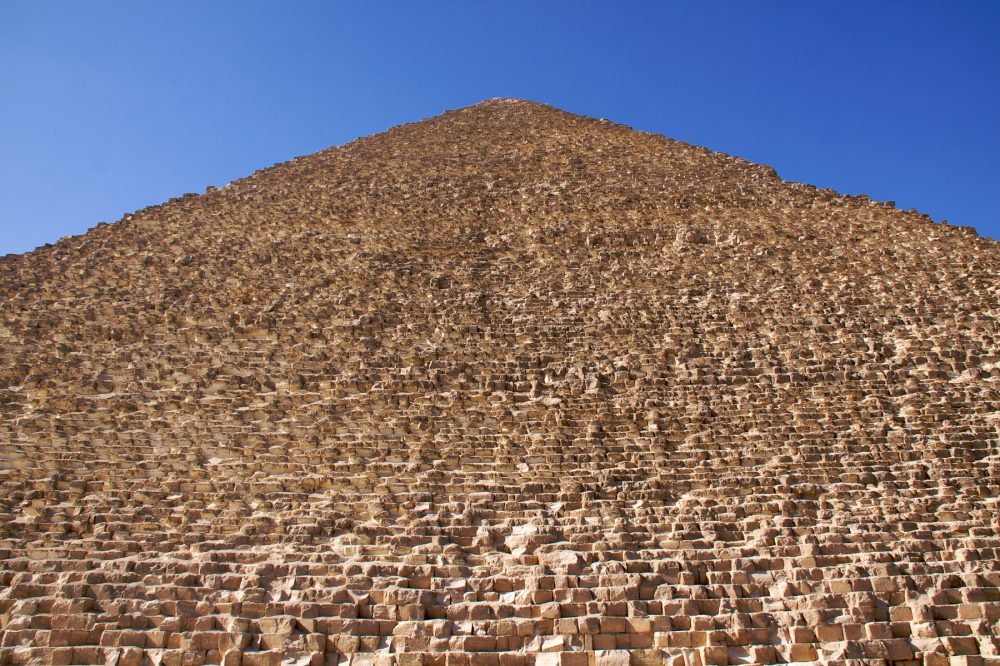 Building a monument like the Great Pyramid of Giza with intricate exterior details and completely ignoring the interior of the pyramid, is like building a limited-edition Ferrari, and then forgetting to put an engine inside it.

The Great Pyramid of Giza is the most famous pyramid constructed on the Giza plateau. Although not the most ancient pyramid in Egypt, the Great Pyramid marks the peak of ancient Egyptian pyramid building.

No other pyramid in ancient Egypt is comparable to the Great Pyramid of Giza in terms of its size, complexity, and interior.

The Great Pyramid, believed to have been completed around 4,500 years ago as a tomb for Pharaoh Khufu is a mysterious structure captivating both on the exterior and its interior.

More about the pyramid’s exterior is known which is mostly based on archaeological explorations and surveys which have opened the doors for new captivating mysteries. Its interior is puzzling and we have still no idea how many potentially secret rooms exist within the pyramid.

We know that the ScanPyramids project, a scientific mission to study pyramids using state-of-the-art technology, discover in 2017 that there’s a previously unknown room inside the Great Pyramid.

The existence of previously-known chambers within the pyramid proves that our knowledge about the pyramid is limited and that we have absolutely no idea of how many more secrets the pyramid holds, after all, its no surprise that a 4,500-year-old structure holds many mysteries. The structure is so old that already to some ancient Egyptian generations the structure was an ancient wonder.

The Secret Behind the Great Pyramid’s Longevity

Believed to have been concluded around 2,560 BC, the Great Pyramid, designed by the royal vizier and architect Hemiunu marked the peak of ancient Egyptian pyramid building. The structure was so complex and powerful that it remained the tallest manmade structure on the surface of the planet for around 3,800 years.

Originally covered by finely polished limestone casing stones, the Great Pyramid of Giza was not only the tallest manmade structure on Earth for nearly 4,000 years, but it was also one of the most fascinating ones.

It is the oldest of the seven wonders of the ancient world and is the only wonder that remains standing to this date.

The reason behind its longevity resides not only in its size, but its incredible design, mind-boggling weight, and stumping precision.

The structure itself is so fascinating and confounding, that despite millennia of research and study, not one single scholar has been able to put forth an acceptable theory on how exactly the Great Pyramid of Egypt was built.

We have absolutely no idea how the builders planned the building, how they started construction, or how the pyramid was finished. That’s because there are no ancient texts whatsoever that speak of any of the pyramids’ construction phases.

We don’t know what sort of tools the ancient builders made use of to quarry the massive stones, nor do we know how they transported them on land, without the use of the wheel.

Despite this, there have been varying theories (including alternative theories) about the construction techniques used thousands of years ago to build a structure like the Great Pyramid.

Although not one is considered to fully satisfy and explain how it was built, most accepted construction theories are based on the idea that the pyramid was built by moving supermassive stones from a quarry, dragging the stones, and fitting them into position.

And that’s precisely the biggest issue behind the construction of the great pyramid, experts say that it was most likely done like that, but they can’t offer valid, precise arguments as to how exactly.

If the stones were put into position at a height more than 140 meters using intricate ramps, then where are the remnants of said ramps?

Tomb or no tomb?

The problem with the tomb theory is that there isn’t a lot of evidence to support this idea from within the pyramid itself. There are a few possible indicators, but no conclusive evidence.

Just as there are no ancient texts, writings, or hieroglyphics that tell us how the Great Pyramid of Giza was planned, designed, and eventually built, there are no pieces of written evidence that would indicate the Pyramids of Khufu, Khafre, Menkaure, or even those that belonged to Sneferu or Djoser, were used as tombs to house the mummified remains of the pharaohs.

But the sarcophagus of the Great Pyramid of Giza located inside the so-called King’s Chamber is unworthy of a pharaoh who built a monument that remained the tallest building on the surface of the planet for nearly 4,000 years.

Do you really think that such a massive effort was gone through to build a pyramid as a tomb, case it with highly polished white limestone that made the pyramid shine like a star, and then completely forget the interior of the pyramid?

Building a monument like the Great Pyramid of Giza with intricate exterior details and completely ignoring the interior of the pyramid, is like building a limited-edition Ferrari, and then forgetting to put an engine inside it.

The Egyptians are believed to have built a pyramid using more than 2.3 million blocks of stone. It was a construction process incomparable to any previous project. Do you mean to tell me that after building a pyramid that most likely shone like a star, with a pyramidion (capstone) possibly plated with gold, the builders then said: “you know what, the interior of the pyramid is not important”?

There’s got to be something missing about the pyramid.

As explained by Lehner, the sides of the square base are closely aligned to the four cardinal compass points (within four minutes of arc) based on true north, not magnetic north, and the finished base was squared to a mean corner error of only 12 seconds of arc.

As noted by Petrie, the completed design dimension is estimated to have originally been 280 Egyptian Royal Cubits high by 440 cubits long at each of the four sides of its base. This results in a fascinating feature: the radio of the perimeter to a height of 1760/280 Egyptian Royal cubits equates to 2π to an accuracy of better than 0.05 percent (corresponding to the well-known approximation of π as 22/7).

This mas most likely a deliberate characteristic:

As noted by Verner: “We can conclude that although the ancient Egyptians could not precisely define the value of π, in practice they used it”

Petrie concluded that “these relations of areas and of circular ratio are so systematic that we should grant that they were in the builder’s design”.

The incredible design and precision embedded in the Great Pyramid of Giza guaranteed a pyramid incomparable to any other structure.

Consisting of approximately 2.3 million blocks obtained from quarries near the Great Pyramid, some of the stones were also obtained from quarries across the river. Interestingly, the largest and heaviest stones used in the construction, ranging from 25 to 80 tons, were transported to Giza from as far away as Aswan, some 800 kilometers away.

We can understand just how complex the pyramid is by looking at the number of construction materials needed to build it.

Scholars estimate that the ancient Egyptians needed 5.5 million tons of limestone, 8,000 tons of granite (from Aswan), and more than 500,000 tons of mortar to build the Great Pyramid in circa 20 years.

John Romer has argued that the planning of the construction of the great pyramid was the same method as the one used in earlier and later constructions, where the builders would layout parts of the plan on the ground to a 1-1 scale, which allowed unmatched precision: “such a working diagram would also serve to generate the architecture of the pyramid with precision unmatched by any other means”.

Romer argues that the ancient builders could have completed the entire project in less than 20 years, proposing an actual 14 years needed to build a pyramid with 2.3 million blocks of stone.

Mark Lehner, as well as other Egyptologists, have argued that the pyramid was built, from start to finish, in no more than 10 years and that the total project required an average workforce composed of 14,500 people and a people workforce of 40,000.

Without the use of pulleys, wheels, or iron tools, the Great Pyramid was built using an ancient critical path analysis method.

The ancient Greek Historian Herodotus argues that the construction of the ramp and pyramid occupied 30 years with a workforce of 100,000 men.

Despite numerous theories, surveys, and studies, there has not been one theory that explains the construction of the great pyramid of Giza that has been agreed upon. Nonetheless, as noted in the 1999 Civil Engineering Magazine, a modern construction management study which involved Mark Lehner and other Egyptologists argues that building the Great Pyramid of Giza required two to three years of site preparation, five years of pyramid construction, and two years of ramp removal, decoration, and other ancillary tasks.

These calculations are based on the fact that the ancient Egyptian population at that time ranged from 1 to 1.5 million people.

This must have been a life-changing accomplishment thousands of years ago. Despite this, no records related to the design or construction of the Great Pyramid have ever been found by experts. This is strange as there are drawing from toms that were built during the later dynasties. Furthermore, experts have recovered plans and records believed to date from the reign of Pharaoh Khufu that prove the ancient Egyptians were well capable of calculating volumes, areas, and angles.

Furthermore, ancient Egyptians could survey and use solar and astronomical observations in order to orient their structures.

As revealed by engineers, the ancient Egyptians perfectly understood the concepts of structural load transfer.

All of the above resumed is believed to have helped the builders construct the Great Pyramid of Giza more than 4,500 years ago. The “only” thing missing in this entire story is hardcore evidence that backs up the talk.

All sources and references are linked to the article.