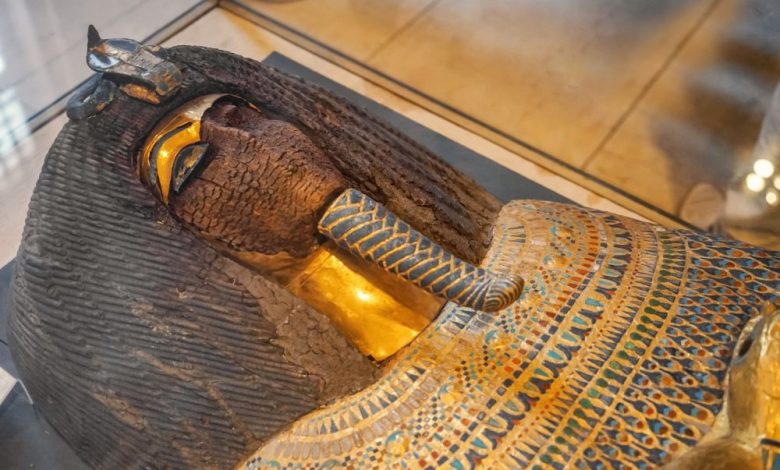 Until about 25 years ago, no one had any idea of the extent of Bahariya’s archaeological treasure. This changed by complete chance and the help… of a donkey.

In 1996, near the temple of Alexander the Great in the Bahariya Oasis, one of the antiquity guards was riding his donkey when the animal stepped into an unexpected hole in the ground.

What the hole revealed was the face of an ancient golden mummy. At least, this is how the story goes. Most locals do not believe in this story and consider it nothing more than a popular myth.

In each case, the background of the discovery cannot compare to the significance of the actual find – a 2000-year-old necropolis from the Greco-Roman period filled with exquisite ancient golden mummies.

Valley of the Golden Mummies

The original radar studies of the area suggested that there could, in fact, be more than 10,000 mummies on the 3-square-kilometer territory of the necropolis but so far, only about 250 have been found.

The place is now known as the Valley of the Golden Mummies and I believe that most people have never heard of it. Isn’t it strange that almost nothing has been said about this area in the last nearly two decades?

I believe that such a massive discovery of a place that could become one of Egypt’s greatest archaeological sites should not have been forgotten. Perhaps, there was no funding or there were better places to excavate but 20 years have passed and the Valley of the Golden Mummies still remains unexcavated.

In each case, we know of around 250 mummies that were discovered in the different stages of the original excavations. These silent witnesses of a bygone era could shed new light on life in these territories during the Greco-Roman period of ancient Egypt if archaeologists ever get a chance to fulfill the originally planned excavations.

Although the tombs in the necropolis had no inscriptions leaving archaeologists with no way to identify the mummies, the discovery revealed a lot about the burial traditions in the region.

There were four types of mummies in the necropolis, evidence for the different classes in society.

These categories include mummies only wrapped in linen which supposedly were the poorest people, mummies in anthropoid coffins, mummies covered with cartonnage, and the most significant “golden mummies” decorated with gilded masks and chest plates.

Numerous artifacts were discovered along with the mummies including different types of jewelry, pottery, and coins. The archaeological team also discovered a large number of statues placed in the tombs, presumably as a symbol of mourning.

Most of the discovered mummies remain in the tombs to this day. Few have been taken out to be shown to the public and are currently in Egyptian museums. Apparently, research has been put on hold as in any other case, the mummies would have been taken out for studying and display in museums.

Hopefully, archaeologists will continue their work in the near or distant future as the Valley of the Golden Mummies surely keeps countless other secrets.