"From the heights of these pyramids, forty centuries look down on us." —Napoleon Bonaparte

More than 4,500 years ago, an ancient civilization erected what would become later one of the most amazing and mysterious monuments on the surface of the planet.

Thought to have been commissioned by Pharaoh Khufu, Giza’s Great Pyramid is the oldest and largest of the three pyramids at the Giza plateau.

The oldest of the Severn Wonders of the Ancient World, and the only one largely intact, the Pyramid is argued to have been built as a tomb.

The Great Pyramid of Giza is also argued to have more stone than that used in all the Churches, chapels, and cathedrals built in England since the time of Christ.

The Pyramid is an even greater wonder when you realize the amount of stone that had to be quarried, transported, and then put into position at the Great Pyramid.

And to show you, the reader, just what an amazing monument the Great Pyramid of Giza is, here are 30 lesser-known facts about the ancient structure.

Scholars argue that the pyramid was built in a 20-year period, starting around 2,560 BC.

Due to its highly reflecting casing stones, the ancients are believed to have called the PYramid “Ikhet,” which translates into “The Glorious light.”

Commonly referred to as the Great Pyramid of Giza, the monument is the oldest and largest of Egypt’s pyramids, rising 146 meters into the air.

To reach the—flat—summit of the pyramid, you need to climb a total of 203 steps.

Today, due to erosion and other factors, the pyramid lost some of its stones. Its summit is missing, and the pyramid measures 138.8 meters in height today. According to a guy who climbed (illegally) the Great Pyramid of Giza, it takes around eight minutes to reach the top but 20 minutes to get down.

The Great Pyramid of Giza was such a masterplan of ancient construction that for 3,800 years, the Great Pyramid remained the tallest structure erected on the planet’s surface.

However, despite being one of the largest pyramids in the world, there are even larger pyramids than that of Pharaoh Khufu.

Measuring 450 meters by 450 meters, the Pyramid of Cholula is acknowledged as the largest Pyramid on Earth according to the Guinness Book of World Records. The ancient civilization that erected the pyramid of Cholula built a monument having a total estimated volume of 4.45 million cubic meters. It was a pyramid worthy of the most impressive monuments in the world, even larger than the Great Pyramid of Giza, which contains approximately 2.5 million cubic meters.

Back to Giza’s Great Pyramid, the ancient monument’s overall weight is estimated at around 6 million tons. That means that the Egyptians used countless stones that weigh more than Elephants.

According to measurements, each side of Khufu’s pyramid covers an area of around 5.5 acres. This means that the total surface area of the Great Pyramid of Giza is 22 acres. 1 Acre equals 4046.86 square meters.

It is estimated that around 2.3 million blocks of stone were used to build the Great Pyramid of Giza.

The average weight of each stone was around 4 tons.

The pyramid we see today is void of nearly all its casing stones. In ancient times, the pyramid was covered with highly polished white limestones.

Scholars estimate that once completed, Giza’s Great Pyramid was covered with as many as 144,000 casing stones.

It is argued that each casing stone had an average thickness of 100 inches. The casing stones were nearly perfect. Measurements have revealed that the stone’s flatness was around 1/100th or 0.01 inch of perfectly straight.

The average weight of each casing stone on the pyramid was around 15 tons.

Most of the Pyramid’s casing stones fell off after a 14th-century earthquake.

Of the three major pyramids at Giza (there are the three satellite pyramids), the Great Pyramid is the only one that is not a four-sided pyramid but an eight-sided one.

This peculiar characteristic can best be appreciated from the air during the Spring and Autumn equinoxes.

It’s also the only pyramid at Giza that has both ascending and descending inner passages. Other pyramids only have descending passages.

The remaining casing stones were taken and re-used in other constructions in Egypt. Some mosques contain casing stones that once stood on the Great Pyramid of Giza. That’s no surprise since the casing stones were of great quality and made the pyramid once shine like a massive jewel in the desert.

The engineering involved in building the pyramid is a wonder of the ancient world. The builders managed to erect a pyramid that would survive, among other things., earthquakes without major damage.

Its interior is magical. Despite Giza’s harsh temperatures, the interior of the Pyramid maintains an average temperature of around 20 degrees Celsius.

One of the most peculiar things discovered inside the pyramid is a granite coffer which, supposedly, once served as the tomb of the Pharaoh Khufu. But the coffer is too big to fit through the passages that lead towards the chamber, which has led many scholars to suggest it was built there during construction. 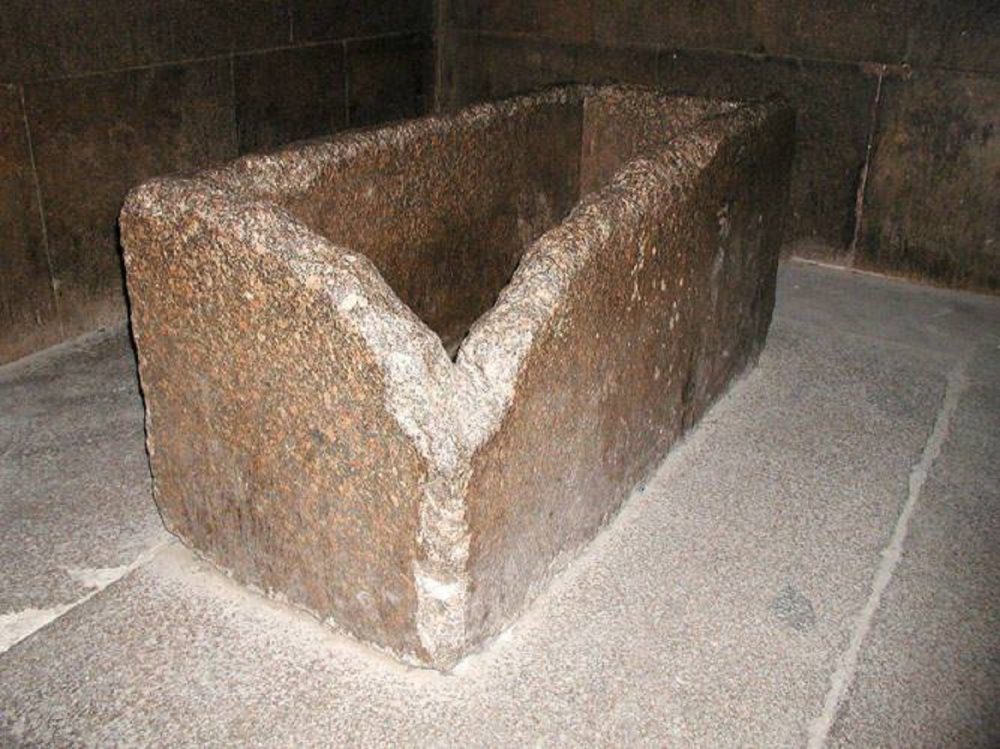 The Coffer inside the King’s Chamber is made of a solid block of granite.

Curiously, even though the Pyramid is tough to have been built as a tomb, there are no markings that would indicate that. No markings have been found on the coffer inside the King’s Chamber, and there are no hieroglyphs inside the walls of the chamber. This is strange because, usually, ancient Egyptian tombs were intricately decorated.

The Great Pyramid of Giza is also considered one of the best-aligned monuments of ancient times. According to measurements, the pyramid faces true north with 3/60th of a degree of error.

Furthermore, the Pyramid is located at the center of all landmass on Earth. Talk about precision.

Don’t forget to check out this article about the Sphinx and the Pyramids and the possibility that the structures were exposed to large amounts of water in ancient times.