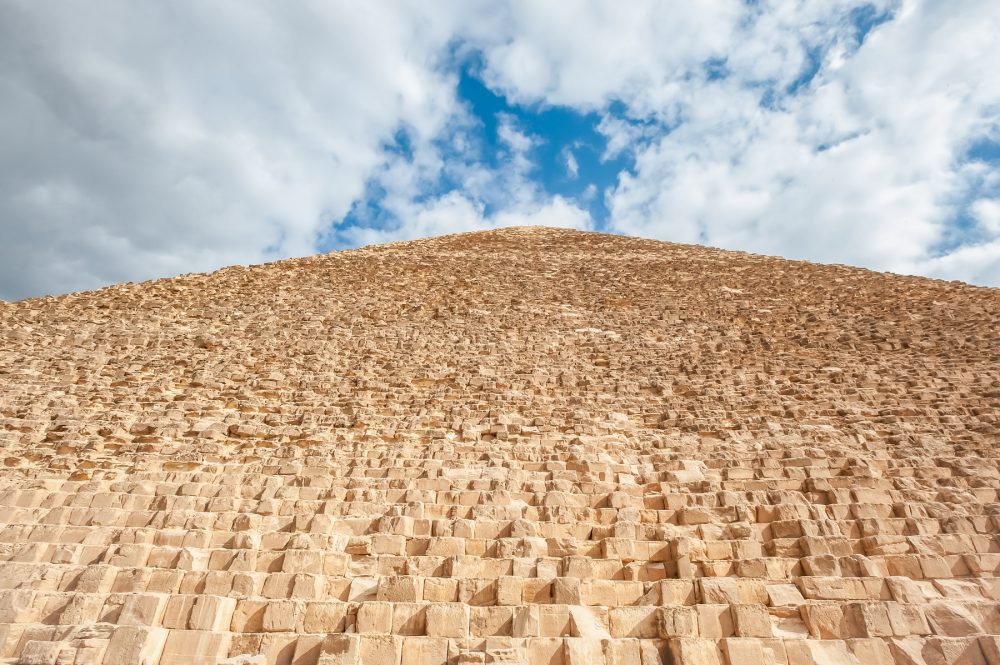 The Great Pyramid of Giza is rightfully the most mysterious and puzzling pyramid on Earth.

Believed to have been created more than 4,500 years ago as a tomb, the Great Pyramid of Giza has aroused the imagination and interest of countless explorers, adventurers, writers, and scholars.

Despite having studied the pyramid for centuries, we have been unable to fully understand how, why and when the pyramid was built, and most of the stuff we do know about it is no more than archaeological guesswork, as experts try to put the pieces of the puzzle back together.

The Great Pyramid of Giza, also known as Khufu’s Pyramid is a giant puzzle of lost history.

There’s so much the pyramid wants to tell us but we simply haven’t found the necessary tools to understand the message it was meant to convey.

Given the fact we have not been able to understand crucial things about the pyramid, we are left with a behemoth mystery built using 2.3 million blocks of stone, arguably some 4,500 years ago.

The great pyramid of Giza is a true wonder of the ancient world that Egyptologists think was built in a period of no longer than 20 years. That, of course, is also guesswork based on various factors. The truth is, not a single piece of ancient literature, papyri, or even hieroglyphics tell us how long it took to build the Great Pyramid of Giza.

What we do know about the pyramid is that it remained the tallest structure on the surface of the planet for a period of more than 3,800 years.

We ‘theorize’ that the pyramid was built as the eternal resting place for Pharaoh Khufu. This idea is mostly based on a mark that was discovered in the King’s Burial Chamber, supposedly mentioning a group of people who participated in the construction of the pyramid, known as “The Friends of Khufu Gang.”

The interior of the pyramid is just as fascinating as its exterior.

The pyramid is believed to have been designed by Khufu’s royal vizier a man called Hemiunu, the main architect of the Great Pyramid. He (Hemiunu) on the other hand, is thought to have taken in much of the knowledge from Imhotep, the man who designed the first ancient Egyptian Pyramid, the Pyramid of Djoser.

Various construction techniques proposed throughout the years have tried explaining how the builders of the pyramid managed to construct a structure that would go on and outlive the civilization that built it in the first place. The Great Pyramid, known in ancient times as Khufu’s Horizon was built with unknown construction methods around 4,500 years ago. When you think about it, everything about the Great Pyramid is puzzling. Strange. Mysterious. And it is precisely that what makes this ancient structure stand out from other pyramids across Egypt and the world, and it’s that what makes it such an impressive structure in the first place.

The more mysterious something is, the more it’s interesting tom the human mind. And the Great Pyramid of Giza is the most mysterious of all pyramids.

4,500 years ago, the ancient Egyptians created one of the most perfectly-aligned structures on the surface of the planet, which they are thought to have nicknamed “Ikhet,” meaning glorious light.

Some of the characteristics of the pyramid’s alignment are thought to have been related to the religion of ancient Egypt.

However, when you come to understand that the north-south axis of the Great Pyramid of Giza is nearly aligned to true north (the deviation being only 2′ 28”) you understand the effort its builders put into the structure, in order to align it.

Somehow, thousands of years ago, the builders managed to design the pyramid with extreme precision.

In a paper published in The Journal of Ancient Egyptian Architecture, Glen Dash, an engineer who studies the Giza pyramids wrote: “The builders of the Great Pyramid of Khufu aligned the great monument to the cardinal points with an accuracy of better than four minutes of arc or one-fifteenth of one degree.”

How they aligned the pyramid is just as a mystery as to how they built it. There are no documents, texts, or papyri of any kind that mention how the ancient builders of the pyramid managed to accurately align the monument.

“The Egyptians, unfortunately, left us only a few clues. No engineering documents or architectural plans have been found that give technical explanations demonstrating how the ancient Egyptians aligned any of their temples or pyramids,” Dash revealed in the article.

The amount and weight of the stones

Saying we don’t know how the Great Pyramid of Giza was built is actually a meaning that is meant to convey that we don’t know how exactly they quarried the massive blocks of stones, shaped them, transported them, and then moved them to the pyramid construction site, where they somehow stacked the stones in a nearly-perfect symmetry, eventually building the Great Pyramid.

Around 2.3 million blocks of stone were used to build the Great Pyramid of Giza. The average weight of each stone was around 4 tons.

The overall weight of the Great Pyramid of Giza is estimated at around 6 million tons.

Impressive right? But there’s more; researchers have calculated that 5.5 million tons of limestone, 8,000 tons of granite (imported from Aswan), and 500,000 tons of mortar were used in the construction of the Great Pyramid.

The strangest part is; there’s not a single piece of written text, hieroglyphics or anything at all that can pint scholars in the right direction, to understand how the ancient builders made all of this possible.

It baffles my mind that an ancient civilization such as the Egyptians created a behemoth of a pyramid, and decided for some reason not to document neither the transport, quarrying methods, nor construction of the pyramid.

That is perhaps the greatest mystery we are faced with today, why the ancient Egyptians decided not to document a construction project of this importance.

The only thing we do have is an ancient papyrus, thought to be the oldest ancient Egyptian papyri, that mentions a man called Merer, who is believed to have participated in the transportation of limestone from different quarries across Egypt to Giza.

Its shape, and the Pyramid’s interior

Although this feature is not immediately clear, the sides of the Great Pyramid of Giza are slightly concave. The ancient builders indented the sides with extraordinary precision, eventually creating an eight-sided pyramid.

This mind-bending feature about the pyramid was detected for the first time in the late 1700s by Sir William Matthew Flinders Petrie.

This strange feature is best observable from the sky, during the Spring and Autumn equinoxes.

And while the Great Pyramid’s exterior is baffling, its interior is no less wonderous.

The interior of the Great Pyramid is believed to be always an average temperature of around 20 degrees Celsius.

There are three known and explored chambers within the Great Pyramid of Giza. Their exact purpose remains an enigma. One of them, the King’s chamber features a rectangular granite sarcophagus, one corner of which is broken.  Since this sarcophagus is larger than the Ascending Passage, it suggests that it was placed inside the chamber before the “roof” of the pyramid was put into position.

No mummies or indications there ever was one have been found inside the Great Pyramid of Giza.

In 2017, scientists with the ScanPyramids project used muon radiography to study the interior of the Great Pyramid. The results of their study have revealed that we have not completely explored the inside of the Pyramid. In 2017, the reported having found a previously unknown chamber dubbed “the Big Void”.

With a length of 30 meters (98 ft), its cross-section appears similar in design to the Grand Gallery.  The exact purpose of the chamber remains a mystery, although some experts argue the gap may have been used during the construction of the pyramid.