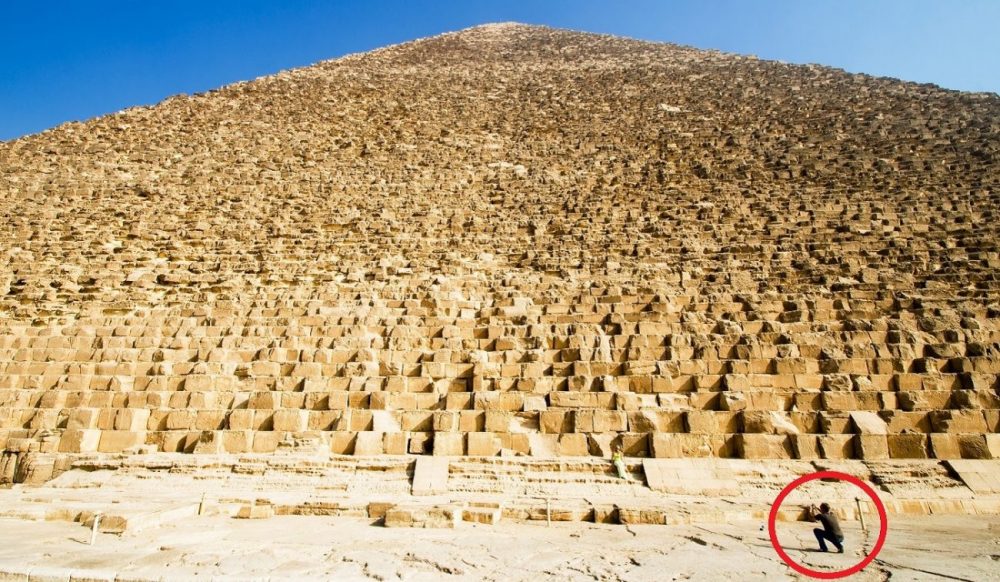 Scientists estimate that 5.5 million tons of limestone, 8,000 tons of granite (imported from Aswan), and 500,000 tons of mortar were used in the construction of the Great Pyramid.

There are pyramids out there, and then there’s the Great Pyramid of Giza.

Also dubbed Khufu’s Pyramid, this magnificent structure rises a towering 138 meters towards the sky, almost as if the ancient builders meant for it to be a stairway to heaven, allowing the ka, the ba, and the akh of the Pharaoh to meet with the gods.

The Great Pyramid of Giza is acknowledged as the oldest of the Seven Wonders of the Ancient World and is the only one mainly intact to this date. This is impressive on its own.

It was built more than 4,500 years ago but nonetheless has stood the test of time.

Yes, it has been greatly damaged through history, but it remains standing, although its casing stones and capstone are missing. The Great Pyramid of Giza is also known for being the tallest structure on the planet’s surface for more than 3,800 years, from 2560 BC to 1311 AD, when the Lincoln Cathedral was finished. And although it is a stunning structure, perhaps the most impressive of all buildings erected in the ancient world, we have no clue what the ancient Egyptians did to build such a monument successfully.

That’s because, mysteriously, not one ancient document exists that mentions how the ancient Egyptians built the Great Pyramid of Giza. That on its own is strange.  The ancient Egyptians were incredible record keepers, so the fact that there isn’t a single ancient papyrus or hieroglyphic inscription anywhere that mentions how, why, and when the Great Pyramid was built is mind-boggling and engulfs the already mysterious pyramid to another level of strange.

Although no mummy was ever recovered from the inside of the Pyramid, it is usually acknowledged that the Great Pyramid of Giza was built as the eternal resting place for Pharaoh Khufu. This is based on a mark discoverer in an interior chamber which supposedly names the “work gang” that helped build the pyramid, making reference to Khufu.

But the Great Pyramid is fascinating for more reasons than you may know of. The interior of the pyramid is as mysterious as its outside. Although we haven’t completely explored the inside of the Great Pyramid, we have discovered three chambers, the lowest of which was cut into the bedrock upon which the pyramid was constructed. This chamber was left unfinished for reasons unknown. The two most famous chambers in the pyramid are the King and Queen’s chambers, located higher up the pyramid.

Great Pyramid and its Electromagnetic properties

The Great Pyramid of Giza is undoubtedly the most-studied pyramid on the surface of the planet. Since time immemorial, experts have tried solving the mystery behind the pyramids’ origin, construction, and purpose. The more we explore it, the less we seem to understand it.

But one of the strangest discoveries made by experts is that the Great Pyramid of Giza can focus electromagnetic energy. This was discovered after researchers created a model of the pyramid and its electromagnetic response. They calculated the extinction cross-section and were estimated how the energy is scattered or absorbed by the Great Pyramid.

Multipole analysis allowed the scientists to confirm how the scattered fields concentrated inside the Pyramids chambers and beneath its base, precisely where the unfinished chamber of the pyramid is located.

“Applications of modern physical methods and approaches for investigations of pyramids’ properties are important and productive,” the scientists explained in their paper, which caused quite a debate when it was published.

“It could allow [us] to make discoveries or get new information motivating new interests [in] the pyramids.”

“Egyptian pyramids have always attracted great attention. We, as scientists, were interested in them as well, so we decided to look at the Great Pyramid as a particle dissipating radio waves resonantly. However, due to the lack of information about the physical properties of the pyramid, we had to use some assumptions.”

“For example, we assumed that there are no unknown cavities inside, and the building material with the properties of an ordinary limestone is evenly distributed in and out of the pyramid. With these assumptions made, we obtained interesting results that can find important practical applications,” explained Dr. Sc. Andrey Evlyukhin, scientific supervisor and coordinator of the research.

The Great Pyramid of Giza is far more fascinating than many of us have ever thought.

We know that the Great Pyramid of Giza was built with mind-bending precision, something that we will get to later in this article.

But did you know that the only Pyramid that has been discovered anywhere on the planet that has eight sides?

It is the largest eight-sided pyramid in the world.

Although not immediately visible, the sides of Khufu’s Pyramid are slightly concave. The sides were indented with a fascinating precision forming the only eight-sided pyramid in the world.

This remarkable feature of the Pyramid was first discussed in La Description de l’Egypte in the late 1700s by Sir William Matthew Flinders Petrie, an English Egyptologist and a pioneer of a systematic method in archaeology and conservation of artifacts.

E. S. Edwards, an English Egyptologist recognized to be a leading expert on the pyramids, wrote: “In the Great Pyramid the packing-blocks were laid in such a way that they sloped slightly inwards towards the center of each course, with the result that a noticeable depression runs down the middle of each face — a peculiarity shared, as far as is known, by no other pyramid” (The Pyramids of Egypt, 1975, p. 207).

The amount and weight of stones used

Experts estimate that the overall weight of the Great Pyramid of Giza is around 6 million tons. That means that the Egyptians used countless stones that weigh more than Elephants. Each of the Pyramid sides covers an area of 5.5 acres, meaning that its total surface area equals 22 acres, covering a total area of 2,000 ft2 or 55,000 m2.

Although we don’t know exactly, it is estimated that around 2.3 million blocks of stone were used to build the Great Pyramid of Giza. That’s impressive. Furthermore, it has been calculated that the average weight of the stone used in the pyramid’s construction was around 4 tons, although much heavier rocks were used in its construction.

The stones became loosened through time and eventually collapsed and were reused in other constructions in Egypt.

Some mosques contain casing stones that once stood on the Great Pyramid of Giza.

Scientists estimate that 5.5 million tons of limestone, 8,000 tons of granite (imported from Aswan), and 500,000 tons of mortar were used in the construction of the Great Pyramid.

The first precision measurements of Khufu’s pyramid were done in 1880–82 by Egyptologist  Sir Flinders Petrie and later described in his work “Pyramids and Temples of Gizeh.”

The accuracy of the pyramid’s workmanship is that the four sides of the base have an average error of only 58 millimeters in length.

The base of the pyramid is horizontal and flat to within ±15 mm (0.6 in). The sides of the square base are closely aligned to the four cardinal compass points (within four minutes of arc) based on true north, not magnetic north, and the finished base was squared to a mean corner error of only 12 seconds of arc.