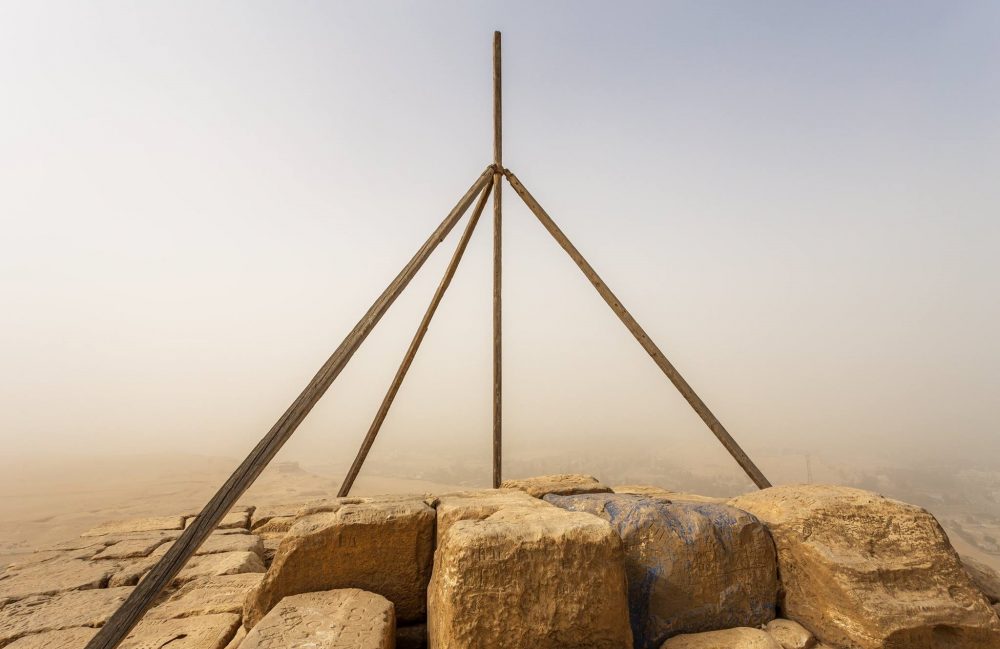 Legends and stories suggest that the Great Pyramid's "capstone" was made of gold. But If it did exist, what happened to it?

Thousands of years ago, and after a series of “lesser” pyramids, a Pharaoh of the fourth dynasty is thought to have commissioned an unprecedented construction process.

He chose the desert plateau not far from Memphis, where he would build a structure that would stand the test of time.

With a total volume of 2,583,283 cubic meters (91,227,778 cu ft), the Great Pyramid of Giza became the largest pyramid ever built in Egypt. Although without written evidence, scholars argue that the pyramid was built to serve as the eternal resting place of Pharaoh Khufu. The structure is thought to have been completed in no more than 20 years.

The pyramids’ architect was probably Khufu’s Vizier, Hemiunu. The Great Pyramid of Giza marked the zenith of pyramid building in ancient Egypt. The structure initially stood at 146.5 meters (481 feet) and remained the tallest human-made building on the planet’s surface for more than 3,800 years, from (approx.) 2560 BC to 1311 AD.

Since there aren’t any texts that mention how, why, and when the pyramid was built, most of the details about the pyramid are the product of theories and academic guesswork. Having that said, Egyptologists maintain that the pyramid was 280 Egyptian Royal cubits high by 440 cubits long at each of the four sides of its base.

It has been calculated that the Great Pyramid of Giza was built with an estimated 2.3 million blocks of stone. Some of the blocks originated as far away as Aswan, some 800 kilometers away.

In fact, the blocks from Aswan are some of the largest stones used in the pyramid. Inside the so-called King’s Chamber, the massive stones have been measured to weigh up to 80 tons. However, how exactly these massive blocks were transported from quarries 800 kilometers away remains one of the many mysteries surrounding the Great Pyramid.

In addition to the above, the builders are thought to have used 5.5 million tons of limestone, 8,000 tons of granite (imported from Aswan), and 500,000 tons of mortar to build the Great Pyramid.

How the pyramid was built, using what tools and technologies remain a profound historical enigma. It is argued that the ancient Egyptians managed to cut stone into roughly shaped blocks by hammering grooves into the natural stone, inserting wooden wedges, and then soaking them with water.

The wedges absorbed the water, which caused them to expand, breaking off chunks of stone.

The stones were then transported from the quarries to the construction site of the Pyramid.

The Pyramid, as we see it today, was much different around 4,500 years ago. It is believed that at completion, the builders surfaced the pyramid with highly polished limestone. These were carefully cut to approximately a face slope with a seked of 51/2 palms to give the required dimensions.

Only a few of these casing stones remain today. Most of them were loosed in AD 1303 when a massive earthquake struck the region. 53 years after the earthquake, Bahri Sultan An-Nasir Nasir-ad-Din al-Hasan took the casing stones and built mosques and fortresses near present-day Cairo. More of the stones were removed from the Great Pyramid and surrounding structures in the 19th century by Muhammad Ali Pasha. These stones were used for the construction of the upper portion of the Alabaster Mosque in Cairo.

However, while most of its outer stones were looted in the past, a few remain in situ around the pyramid’s base, standing as evidence of the exceptional workmanship and precision of those who built the pyramid.

This exceptional evidence of workmanship is present everywhere in the pyramid. For example, it has been reported that the base of the pyramid is level to within just 2.1 centimeters (under one inch); the average deviation of the sides from the carinal point is 3′ 6” of arc; the greatest difference in the length of the sides is no more than 4.4 centimeters (1.7 in).

In addition to that, the Great Pyramid of Giza is the only eight-sided pyramid of Egypt. This curious-albeit unknown–feature was first mentioned in La Description de l’Egypte in the late 1700s by Sir William Matthew Flinders Petrie. In 1940 the peculiarity was spotted and photographed by British Air Force pilot P. Groves, flying above the ancient monument and noticed the concavity.

It has also been reported that the ratio of the perimeter-to-height of 1760/280 Egyptian Royal cubits equates to 2π to an accuracy of better than 0.05 percent. Although some scholars argue this is just a random characteristic, some believe that this results from deliberate design proportion.

The reason behind such fantastic precision and accuracy remains one of the many baffling characteristics of the Great Pyramid.

Considering the amount of stone used in the pyramid’s construction and the accuracy and precision, it remains a profound mystery how all of this was achieved 4,500 years ago by builders who did not possess technologies such as pulleys, wheels, or iron tools.

Even today, most visitors to the pyramid wonder how it was done more than 4,500 years ago. Yet, even with modern equipment and tools and profiting from nearly five thousand years of experience, architects and engineers today might well quail if called upon to erect a duplicate of the Great Pyramid.

Because of that, theories concerning its construction are many and varied.

The earliest account detailing at least a small part of how the pyramid was built around 2,000 years after its construction, as detailed by Greek historian Herodotus who reports in detail:

“The pyramid itself was twenty years in building. It is a square, eight hundred feet each way, and the height the same, built entirely of polished stone, fitted together with the utmost care. The stones of which it is composed are none less than thirty feet in length.”

“‘The pyramid was built in steps, battlement-wise, as it is called, or, according to others, altar-wise. After laying the stones for the base, they raised the remaining stones to their places using machines formed of short wooden planks. The first machine raised them from the ground to the top of the first step. On this, another machine received the stone upon its arrival and conveyed it to the second step, whence a third machine advanced it still higher.”

“Either they had as many machines as there were steps in the pyramid, or possibly they had but a single machine, which, being easily moved, was transferred from tier to tier as the stone rose – both accounts are given, and therefore I mention both. The upper portion of the pyramid was finished first, then the middle, and finally, the part which was the lowest and nearest the ground.”

While this description is fascinating, being the only one in existence, it has important details lacking.

It remains an enigma what was located atop the pyramid. Today, at the top of the pyramid is a kind of mast or flagpole supposedly placed there by astronomers in 1874, who calculated where the pyramid’s apex would have been if finished. It also marks the original height of the pyramid when the structure was completed.

What exactly was on top of the pyramid is a mystery. The second-largest pyramid at Giza, the Pyramid of Khafre, may reveal certain clues. This pyramid is one of the few in Egypt, with its upper casing stones still in place. It suggests that when Khafre’s pyramid was completed, it was cased with highly polished limestone blocks from top to bottom.

The Great Pyramid may or may not have had a similar summit. It has been suggested that once the pyramid of Khufu was finished, it was topped by a massive capstone–probably made of gold–that made the pyramid shine even brighter.

The exact whereabouts of this capstone remains an enigma, and it has never been proven that it did feature a golden summit. It also seems unlikely; placing such a massive and heavy capstone would have required a kind of crane(?), capable of raising the capstone to a height of more than 130 meters.

The truth is that since there aren’t any descriptions that mention or show what the pyramid looked like once completed, it is nearly impossible to conclude what was located on its summit. So, from theory to theory, the only thing we can do is wonder about it.