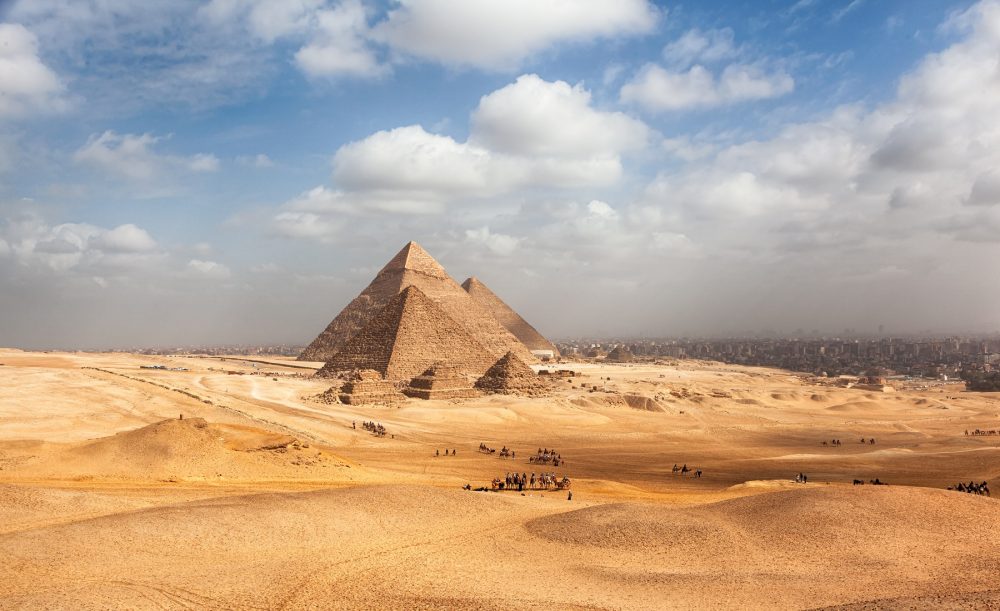 Not all secrets of ancient Egypt are buried beneath the golden sands.

Thousands of years ago massive, towering structures were built in the desert. Rising hundreds of meters towards the sky as a kind of stairway connecting heaven and Earth, the ancients built pyramids that would stand the test of time. Surrounded by scorching deserts, buried secrets, and a history written in stone, mankind has studied and attempted to understand the meaning of the pyramids for centuries.

Whenever the ancient Pyramids are brought up in a conversation, the Great Pyramid of Giza springs to mind. But these are not the only pyramids in Egypt. In fact, there are many others at the edge of the plateau just west of modern-day Cairo, and there are pyramids constructed in distant lands such as Sudan.

The Great Pyramid of Giza isn’t even Egypt’s oldest structure. Although the pyramid’s exact age remains a debated subject among authors and researchers, it is usually maintained that the Pyramid, believed to have been commissioned by Khufu, was completed around 4,500 years ago.

But generations before Khufu, a Pharaoh of the Third Ancient Egyptian Dynasty revolutionized ancient Egyptian architecture when he turned towards the Saqqara Necropolis and order his Royal Vizier and architect to build a stone structure that Egypt had never seen before.

Djoser and Imhotep completed the Step Pyramid at Saqqara and their names are now forever recorded in history as the builders of the first stone pyramid of Egypt. Not only that, the pyramid of Djoser at Saqqara is regarded as the earliest colossal stone building in Egypt and the earliest large-scale cut stone construction. With that in mind, the first pyramid of Egypt can be traced back to around 2,780 BC according to Egyptologists.

It was Sneferu, the founding pharaoh of the Fourth Dynasty of Egypt during the Old Kingdom who would go on and build three striking pyramids in Ancient Egypt and introduced major innovations in the design and construction of the pyramids.

He commissioned the Red Pyramid which believed to be Egypt’s first successful attempt at constructing a “true” smooth-sided pyramid. With the successful completion of the Red Pyramid, Sneferu laid down the foundations for the construction of the greatest and largest pyramid Egypt would ever see, the Great Pyramid of Giza which was supposedly built by Sneferu’s Sun, Khufu.

According to mainstream Egyptologists, the pyramids at Giza were built over the span of three generations of ancient Egyptian Kings. The largest pyramid at Giza is believed to have been erected by Khufu, the second-largest by his son Khafre, and the third pyramid was built be Menkaure.

It is argued by modern scholars that ancient Egyptian pyramids were built initially as tombs for the Kings of Egypt. Starting with the Step Pyramid at Saqqara, the pyramid as a tomb supposedly reached its peak with the completion of the Great Pyramid of Giza.

The idea that Pyramids were tombs is a highly debated subject when it comes to Egyptian Pyramids, and not everyone agrees with the theories postulated by scholars. As noted by Ahmed Fakhry, the concept of a pyramidal tomb is the direct result of centuries of development and experiments. The earliest royal toms are of considerable interest because they are believed to illustrate the development of a funerary architecture that existed prior to the Pyramids.

However, other pyramids around the world were everything but not tombs. In fact, Egypt also has pyramids that are acknowledged by scholars to not have served the purpose as tombs, and they are called the provincial pyramids of Egypt.

Egypt’s provincial pyramids, although not as massive as the Great Pyramid, are evidence that not all pyramids can be or should be treated as tombs. The southernmost pyramid is located on the island of Elephantine, there are three near Ombos, Edfu, and Hierakonpolis. There is one near Abydos and a solitary, small pyramid stands in at Zawiyet el-Meitin. There is another one at Seila overlooking Fayum from atop the desert spur between it and the Nile River.

Of all the major pyramid sites in Egypt, Giza, because of its massive pyramids, is the most famous of all.

Because of that, a great deal of archeological work has been performed at the site in order to help reveal its countless secrets, some of which lie buried deep beneath the surface. But not all of the ancient secrets are buried beneath the surface. Some of them are embedded deep within the structures, deep inside monuments that have seen cultures rise and fall, wars being waged, peace being offered. Kings came and went, but the pyramids endured.

It is precisely at Giza where the massive triangular shapes loom against the sky, connecting heaven and Earth, where experts have discovered precious parts of ancient Egyptian history.

Of all the discoveries at Giza, those related to the pyramids are perhaps the most interesting.

In 2017, a group of multinational researchers from the ScanPyramids project discovered that not all of the Great Pyramids secrets have been revealed. Using muon-detecting sensors, the scientists revealed the existence of a massive cavity inside the pyramid marking the first major structural discovery since the 19th century.

We thought that we had it all figured out, but thanks to state-of-the-art technology, we’ve come to realize that the pyramids of Egypt hide far many more secrets than we ever imagined.

The mysterious void is located above and between the King’s Chamber and the Grand Gallery. Its purpose remains unknown. What we do know is that the massive void appears to have the same characteristics as the grand gallery and is almost 50 meters wide and more than one meter wide. Its contents, if any, remain hidden ever since the completion of the pyramid.

One of the most revealing discoveries made at the Giza Pyramid Complex are the several ancient Egyptian solar pits. Buried beneath the sand and not far from the pyramids, the most famous of said vessels is the so-called Khufu Ship not preserved at the Giza Solar Boat museum located next to the Great Pyramid of Giza. Although these boats were buried near many ancient Egyptian pyramids, their exact history and function remain unclear. They could have been used as a kind of solar barge; ritual vessels used to carry the resurrected king with the sun god Ra, across the sky.

A series of rare ancient Egyptian tombs were discovered in 2019 at the Giza plateau, not far from the Great Pyramid of Giza. The 4,500-year-old sarcophagi were found intact and bear inscriptions that make reference to two individuals who are believed to have lived in Egypt around 4,500 years ago, during ancient Egypt’s Fifth Dynasty. The location of the tombs is not far from a cemetery that mainstream experts maintain is where the builders of the Great Pyramid were buried.

What was not found, rather than found? It is maintained that the Giza pyramids served as the eternal resting places for three ancient Egyptian pharaohs: Khufu, Khafre and Menkaure. If the pyramids served the purpose as tombs, you’d expect to see some kind of markings, etchings, paintings or hieroglyphs making reference to the king buried inside the pyramid. However, archeologists have not discovered one single piece of evidence within the pyramids that would point to the pyramids being tombs.

Strangely, neither the mummified remains of Khufu, Khafre, nor Menkaure has been found inside the pyramids. This, say experts, is because the pyramids were broken into in the distant past, and their contents were looted.

Curiously, neither the mummy of Pharaoh Djoser nor Sneferu has so far been found. Their mummies were not located inside their respective pyramids, raising questions whether or not the pyramids were initially tombs.

A world beneath the pyramids. Not many people are aware that the Giza plateau is as impressive above the ground, as below it. There are ancient tunnels and shafts beneath the Giza complex that remain hidden and off-limits but for a select few.

Among the many hidden chambers, the one referred to as the Osiris Shaft is the most famous. This shaft is composed of three different levels the last of which leads towards a tunnel filled with water, built around 38 meters beneath the surface.

As noted by Greek Historian Herodotus, ancient Egyptian priests talked of a long-held belief of the construction of extensive underground chambers constructed by what they described were the original builders of ancient Memphis.