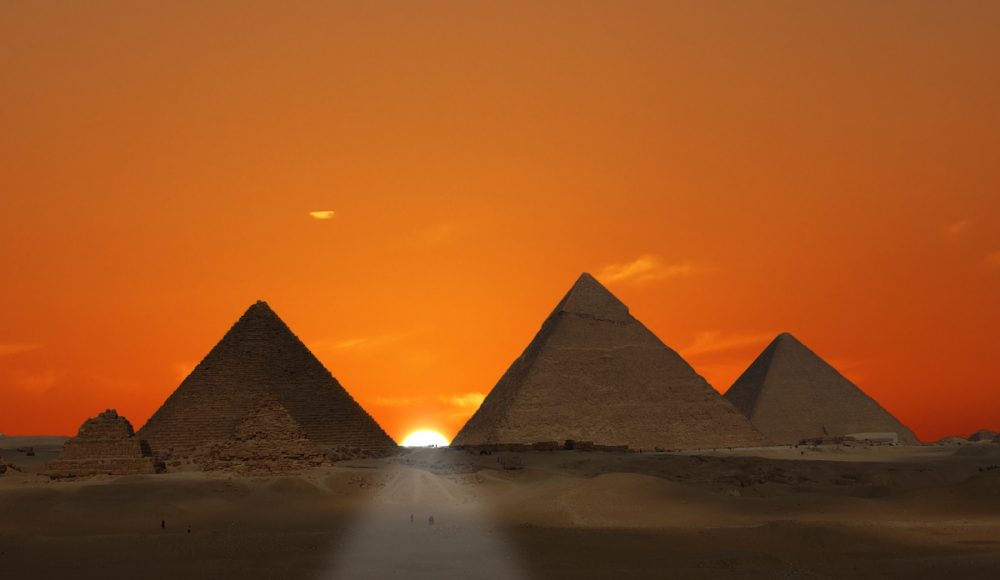 Why pyramids, why so many?

For thousands of years, even before history began to be recorded, civilizations worldwide started building massive pyramids.

Hundreds, thousands of stones would be quarried, transported, and then somehow stacked together, forming majestic monuments.

Africa has hundreds of pyramids. But these structures are not limited to Africa. There are pyramids in Asia, Europe, and the Americas. Some of them are eerily similar in design.

The pyramidal form has always fascinated humankind, to the point that the term pyramidology has been coined to refer to a set of alternative beliefs that endow the pyramids, or by extension to the pyramidal form, of mystical or supernatural powers.

The origin of pyramids

There has been much discussion about the origin of the pyramidal form in human construction.

Pyramidomania, a global phenomenon of building pyramids, arose in different civilizations without contact with each other, which has given rise to many speculations of all kinds. We don’t know why, but spontaneously and randomly, different cultures built pyramids. Of all other possible construction designs, they chose pyramids.

From a purely structural or constructive perspective, the pyramid shape is an almost inevitable result of the simple desire to gain height using stone.

In ancient times, the standard architecture utilized materials that were easy to get and handle, such as clay or wood. However, as the ancients themselves would eventually notice, this construction type did not last over time. When a more lasting building was desired, such as a tomb, or an emblematic building, the stone was used (or brick if the former was not available).

According to an archaeological point of view, the first stone constructions, therefore, obeyed funeral or religious purposes. Evidence of that are mastabas in Egypt, which are thought to have been the pyramids’ predecessor in Egypt. The Step pyramid of Djoser is thought to have been built as a series of mastaba-like structures stacked on top of one another.

But the idea that Pyramids were used as tombs is a highly debated one, and there are numerous reasons why. If mastabas were used for thousands of years as tombs, why change all of that all of a sudden? We know that the ancient Egyptians continued developing mastabas and building them, even though pyramids were already being constructed.

To understand more as to why pyramids may not have been tombs, we travel to ancient Mesopotamia and take a look at some of their oldest, most impressive structures: Ziggurats.

The design of a ziggurat is essentially a pyramid. The structure was built from a simple base and a temple on top. The base could be rectangular, oval, or square. The ziggurat’s core was built of sun-dried bricks (adobe), while the outer part was covered with cooked bricks, which could also be vitrified in different colors.

One of the best-preserved Ziggurats is Chogha Zanbil in present-day Iran, in the territory between Iraq and Iran. The oldest preserved ziggurat is that of Kashan, dating back to the third millennium BC.

Some archeologists argue that, at least, the Egyptian Pyramids were born from Ziggurats.

If that is the case, we need to understand that Ziggurats were a typical temple for the Sumerians, Babylonians, and Assyrians. Furthermore, Ziggurats were not the place where public acts or ceremonies were performed but were considered the gods’ abode.

Thanks to the ziggurat, people could remain close to their gods. Each city had its own god or goddess. Only priests had access to the ziggurat’s interior to meet the needs of the gods, which made them a powerful element of society.

So if Ziggurats were among the first pyramidal shaped structures on the planet and were not used as tombs, why do we tend to imply all pyramids had to be tombs?

Some authors have suggested that the Ziggurat was a symbolic representation of a bridge between heaven and Earth.  The ancient Mesopotamians believed that these pyramid temples connected both heaven and earth. Interestingly, the ziggurat at Babylon was known as Etemenankia or “House of the Platform between Heaven and Earth.”

The Sumerians also considered them as a cosmic axis, a vertical link between heaven and earth, and between the earth and the underground world, and a horizontal connection between the different lands.

In total, 32 ziggurats are known; four are in Iran, and the rest are mainly in Iraq.

The last one discovered is that of Sialk, in Iran.

In fact, it has been argued that Ziggurats may have even inspired the design of The Biblical Tower of Babel may be based on the ziggurats of Babylon.

If Ziggurats were not tombs, why do we assume pyramids were?

Although pyramids vary in shape, size, and construction material, their meaning was most likely the same.

The simplest pyramids consisted of seashells, like the Brazilian pyramids, and other pyramids were built as simple stone stacks. However, the larger ones required enormous effort, skill, ingenuity, and organizational capacity for their construction.

The pyramids’ exterior coatings varied greatly from one culture to another, ranging from limestone cladding to stucco. The process of carving the stones was extremely slow since these used to be hard stones (granitic type). It is argued that bronze and flint tools were used to work them, and polishing was achieved with quartzite powder.

But all of the above is based on theories and assumptions. Physical evidence is almost nonexistent.

The absence of ancient texts has made it an impossible task to fully understand how some of the most impressive pyramids were built in ancient times.

We know that when some of the most ancient pyramids were built, the wheel had still not been invented.

The Great Pyramid of Giza is the tallest pyramid ever constructed, while the Pyramid of Cholula is the most massive pyramid ever built. The ancient Egyptians developed all sorts of pyramids, from the Bent Pyramid, the Step Pyramid to the traditional smooth-sided pyramid, an emblem of Egypt.

There are pyramids in Egypt, Sudan, North, Central, and South America. Pyramids have also been found in Europe and Asia.

The Pyramids of Central and South America, for example, were never, ever, meant to serve as tombs. Mayan pyramids were used for ceremonial purposes and even as astronomical-astrological observatories and calendars. The oldest remains are estimated to date from the Preclassic 600 a+BC. Among the many Mayan pyramids, the most famous is the Pyramid of Kukulcan, although many others exist and are equally stunning.

Central Mexico also has intricate pyramids. The Pyramid of Cholula is the most notorious. Just as their Mayan counterparts, these structures were also used as temples and ceremonial centers, and there isn’t evidence that any of them were used as tombs.

Peru, for example, has the pyramids of Caral, the oldest South American civilization. Caral developed around 3,000 BC. The ancient culture of Caral built pyramids contemporary with Egypt and at least 1500 years earlier than Olmec Pyramids.

The ancient Inca also built pyramids, and just as you would probably imagine, they were not used as tombs. The Incas constructed pyramidal structures called ushnu, used as astronomical observatories and religious worship centers, whose tradition dates back even to pre-Inca times.

Pyramids, or better-said pyramid temples, were also built in India and other parts of Asia.

The pyramid-temple of Borobudur is one of the best examples. Also not a tomb, Borobudur is actually a variation of a step pyramid. It is a sanctuary and place of Buddhist pilgrimage. The pilgrims’ journey starts at the base of the monument and proceeds along a path that surrounds it while climbing to the top through the three levels of Buddhist cosmology; Kamadhatu (the world of desires), Rupadhatu (the world of forms), and finally Arupadhatu (the formless world).

Although the pyramid shape is one of the most stable shapes for building taller structures, countless ancient cultures adopted the design and made it their own. There are thousands of pyramids scattered across the globe, and many of them are extremely similar in design, almost as if the same builders were involved in the construction.

Take a look at Egypt and the three pyramids at Giza. It has been claimed that all three monuments, the pyramid of Khufu, Khafre, and Menkaure, were built as tombs. Despite these claims, not a single piece of evidence has been uncovered, suggesting that the mummified remains of a Pharaoh were ever inside the pyramids. Furthermore, none of the three pyramids at Giza have decorated chambers that would suggest a king was ever buried there.

Individual pyramids, like the Great Pyramid of Giza, are incredibly aligned. The north-south axis of the Great Pyramid of Giza is nearly aligned to true north (the deviation being only 2′ 28”), and only then do you understand the effort its builders put into the structure to align it. Somehow, thousands of years ago, the builders managed to design the pyramid with extreme precision.

And if the Great Pyramid of Giza wasn’t already impressive enough, a scientific study determined in 2018 that the pyramid had electromagnetic properties. Using multipole analysis, the scientists confirmed that the scattered fields concentrated inside the Pyramids’ chambers and beneath its base. “Applications of modern physical methods and approaches for investigations of pyramids’ properties are important and productive,” the scientists explained in their paper.

Mathematical properties within pyramids: “Petrie found nothing that disproved the pyramidologist’s assumption that the Great Pyramid had been built according to a master plan. Indeed, he describes the Pyramid’s architecture as being filled with extraordinary mathematical harmonies and concordances: those same strange symmetries that had so haunted the pyramidologist. Petrie not only noted, for example, that the proportions of the reconstructed pyramid approximated to pi – which others have since elaborated to include those twin delights of Renaissance and pyramidological mathematicians, the Golden Section and the Fibonacci Series.” ― John Romer, The Great Pyramid: Ancient Egypt Revisited