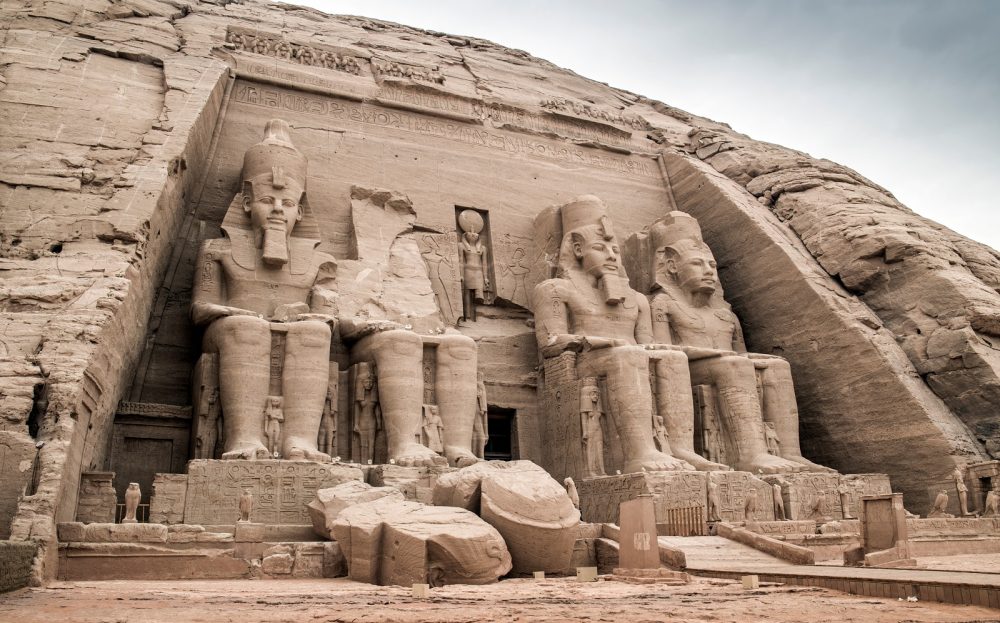 The Great Temple of Abu Simbel has a fascinating solar alignment. The temple was positioned by the ancient Egyptian builders in such a way that on October 22 and February 22, the rays of the sun would pierce the temple illuminating the intricately carved temples on the back wall.

By far the most formidable building project begun during the reign of Ramesses II were these two stone temples carved into a mountainside near what is now the Egyptian-Sudanese border circa 1244 B.C. Abu Simbel is located on the western shore of Lake Nasser, some 231 km southwest of Aswan (about 300 km by road), near to its original location. Just as the Great Pyramid at Giza, this massive construction is said to have taken around twenty years.

At the entrance to the larger temple lay four huge statues of the pharaoh, while inside, a network of chambers was built in such a way that on two days each year, the sunlight could illuminate another statue of the Pharaoh inside.

Long abandoned, the rock-cut temple remained forgotten and buried beneath Egypt’s golden sand until 1817 when the Italian archaeologist Giovanni Belzoni revealed its entrance. In the 1960s, the entire temple complex was disassembled and rebuilt on higher ground, to make way for the construction of the Aswan High Dam.

A rock-cut temple unlike any other

The temples were excavated in the rock (speos) during the reign of Pharaoh Ramses II (Ramesses the Great) in the 13th century BC. as a monument dedicated to said Pharaoh and his wife Nefertari, to celebrate his assumed victory in the battle of Kadesh and as a show of power to his Nubian neighbors.

In addition to being dedicated to Rameses II, the temple is dedicated to the great gods of ancient Egypt: Amun, Ra-Horakhty, and Ptah. These three gods were highly venerated throughout the History of Ancient Egypt.

Ra-Horakhty was worshiped at Heliopolis, Amun was the head of the Triad of Thebes and Ptah the great craftsman god of Memphis.

Besides the three ancient Egyptian gods, Ramesses is represented as the fourth great god of Egypt.

The construction of the temple is believed to have begun around 1285 BC, and it took around 20 years to complete, around 1264 BC.

Abu Simbel is one of the hypogea that were built in Nubia during the long period of the reign of Ramses II. The purpose of the temple was to impress the southern neighbors and reinforce the influence of the Egyptian religion in the region. This is no surprise since, during his reign, Ramesses II kicked off a massive construction program across Egypt and Nubia, a territory which ancient Egypt controlled at the time.

Nubia was of great importance to the ancient Egyptians as it was the source of gold and many other extremely valuable trading goods.

In an attempt to Egyptianize the people of Nubia, the Pharaoh built massive temples that were meant to impress the Nubians.

The most famous of the temples are the rock temples near the modern village of the Abu Simbel.

There are two temples there.

In ancient times, the temple was referred to as the “Tempe of Ramesses, beloved by Amun.”

The main entrance of the Gran Temple is flanked by four massive statues, rising twenty meters into the air, representing Ramesses II seated on a throne and wearing the double crown of Upper and Lower Egypt. The statue left to the entrance was damaged in an earthquake which caused its head and torso to fall off. As the temple was relocated during the construction of the dam, the restorators decided not to repair the statue, but to leave the stones in their original positions after the temple was found.

The massive temple behind the statue rises 33 meters in height and is 28 meters wide.

How important Ramesses the Great thought the god Ra-Horakhty was can be seen inside the temple. The entrance doorway is surmounted by a series of bas-relief images of the Pharaoh worshipping Ra-Horakhty, with a series of statues standing in a large niche. The statues, as well as the bas reliefs, are thought to have been carved directly into the bedrock of the original location.

The interior of the Great Temple is as stunning as its exterior. The builders and workers who participated in the construction and finalization paid great attention to detail, resulting in a massive rock-cut piece of art that just like the pyramids at Giza, would eventually stand the test of time.

The inner sections of the Great Tempe have the same triangular layout seen in other ancient Egyptian temples. The temple features rooms that decrease in site starting from its entrance of the sanctuary. And even though the interior of the temple resembles other structures, the interior of the Great Temple at Abu Simbel is uniquely mysterious due to the many chambers on its inside.

The Hypostyle Hall of the temple is 18 meters long and nearly 17 meters wide. It is supported by eight towering Osirid pillars that depict the defied Pharaoh with the god Osiris, the ancient Egyptian god of the Underworld, indicative of the Pharaoh’s everlasting nature.

The interior of the temple was not randomly designed but had a specific purpose. The Pharaoh commissioned the left-hand wall to bear the white crown representative of Upper Egypt, while the opposite side was depicted with the double crown of Upper and Lower Egypt.

In addition to the intricate depiction of the crowns of upper and lower Egypt, the temple also includes a number o bas-reliefs on the walls depicting the various military campaigns that Ramesses the Great led.

Much of the illustrations depict the Battle of Kadesh where the Pharaoh faced the Hittites. The most famous reliefs show the Pharaoh himself mounted on a chariot shooting arrows at fleeing enemies. The Battle of Kadesh holds an important place in history. The conflict is usually dated to 1274 BC, and it is the earliest battle in recorded history where tactics and troop formations are known. Furthermore, according to scholars, the Battle of Kadesh is considered the largest chariot battle ever wagged, and experts estimate that up to 6,000 chariots participated in the battle.

In addition to the intricate carvings and bas-reliefs inside the temple, there is another stunning feature worth mentioning: The temples solar alignment.

The axis of the Great Temple at Abu Simbel was positioned by the ancient Egyptian builders in such a way that on October 22 and February 22, the rays of the sun would pierce the temple illuminating the intricately carved temples on the back wall. The only statue that would remain in complete darkness was the statue of the god Ptah, the Egyptian deity connected to the underworld. The dates, October 22 and February 22 are not random. According to scholars, both dates relate to two important occurrences: The Pharaoh’s birthday and his coronation. This, however, is just a theory, since there is no direct evidence to support the claims.

In addition to the Great Temple, some one hundred meters (330 feet) from the primary sanctuary is the Small Temple; the temple of Hathor and Nefertari.

Similar to the Great Temple, the facade of the small temple is intricately decorated with two groups of massive statues that are separated by a massive entrance. The statues of the small temple stand at a lithe more than 10 meters in height and presented the king and his queen. Both sides of the entrance feature a statue of the king and his queen, where the Pharaohs is depicted wearing the white crown of Upper Egypt, (south colossus) and the double crown of Lower Egypt (north colossus).

The Pharaoh must have really loved and respected his wife since this is one of the very few examples in Egyptian art where the size of the Pharaoh’s statues are equal to the size of the statutes of his Queen.

Resumed, here are 5 things you should know about Abu Simbel:

The Temple known as Abu Simbel today is actually two temples; The Great Temple and the Small Temple. The entire complex was known in ancient time as “Temple of Ramesses, beloved by Amun“.  Although the temple is famous for its exterior decoration and massive statues, the interior of the Great Temple is equally stunning.

The Temple was moved. Although the temples stood the test of time, they were threatened by modern problems. Due to the rising Nile, the temples needed to be moved. “Following the decision to build a new High Dam at Aswan in the early 1960s, the temples were dismantled and relocated in 1968 on the desert plateau 64 meters (about 200 feet) above and 180 meters (600 feet) west of their original site,” writes Robert Morkot in an article in the “Oxford Encyclopedia of Ancient Egypt” (2001, Oxford University Press). The original location of the temples is now flooded. Moving the entire temple was a behemoth project involving cutting the temple into smaller pieces between 3 to 20 tons, and later reassembling it precisely as it was when it was just carved in ancient times.

The Great Temple is aligned with the sun in a fascinating way. The builders of Abu Simbel positioned the axis of the Great Temple in such a way that October 22 and February 22, the rays of the sun would pierce the temple illuminating the intricately carved temples on the back wall. This is not random. Scholars believe that both dates are historically important. One of the dates is believed to mark the Pharaoh’s birthday, and the other date the day the Pharaoh was crowned king of Egypt.

The Great Temple features an incredible bas-relief that depicts the Pharaoh fighting the battle of Kadesh. This battle is usually dated to 1274 BC. According to experts, the Battle of Kadesh is the earliest battle in recorded history where tactics and troop formations are known and one of the largest chariot battles ever wagged.