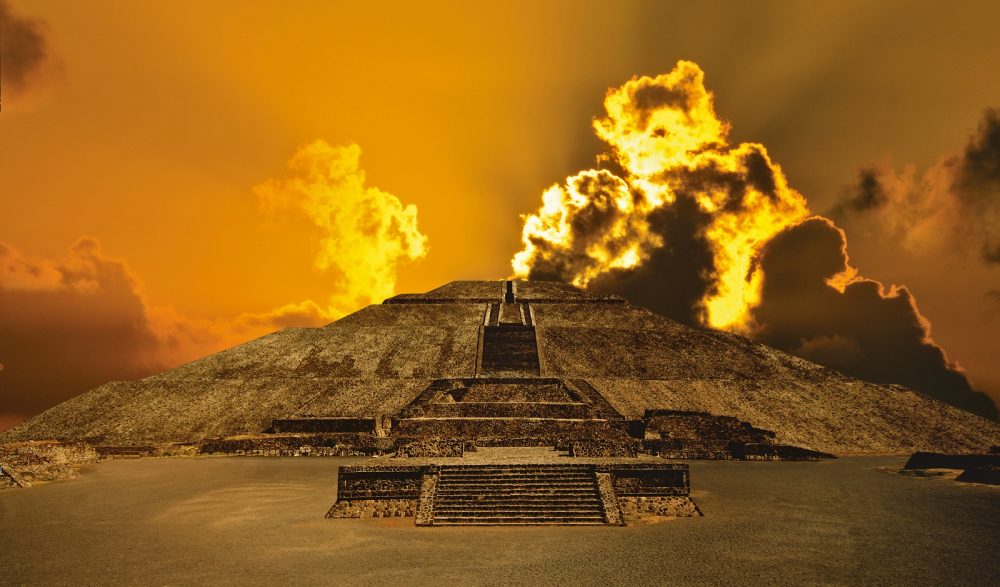 More than 37 kilograms of Mica have been found in Teotihuacan. Mica was found in the form of plates, triangles, trapezoidal figures, rectangles, squares, and circles, as well as in small fragments and dust.

The sub valley of Mexico is home to what was once the largest ancient city in pre-Columbian America.

Home to around 150,000 people, the ancient city of Teotihuacan is shrouded in mystery. The culture that erected the city is unknown to history, although scholars have theorized throughout the years which they may have been.

Much of what we know about Teotihuacan and its fascinating three pyramids comes from the Aztecs, who found the city in ruins, and from the time of the Spanish Conquest.

Before the 1400s, the city of Teotihuacan was one of the first metropolises in the Western Hemisphere. The Spanish conquest references suggest the name Teōtīhuacān was given by the Nahuatl-speaking Aztecs hundreds of years after the fall of the city, which is thought to have been around 550 CE.

Scholars have translated the word Teotihuacan as the “birthplace of the gods,” or “the place where gods were born.”

Its original name remains a mystery, much like its builders. But we know they built a city that would stand the test of time and remain unmatched for thousands of years.

When the Aztecs stumbled across Teotihuacan, the city was already in ruins. It was ancient even to the Aztecs, who were convinced that it was precisely there, in a city they would later call Teotihuacan, where the gods created the universe.

Anything that happened before the Aztecs arrived at Teotihuacan isn’t well documented. For example, ancient hieroglyphs from the Maya suggest the city of Teotihuacan was referred to as “The Place of Reeds.”

The terminology used to describe Teotihuacan refers to both the city and its ancient inhabitants.

There isn’t a consensus among scholars that agrees on the city’s exact foundation date and who its original founders were. Experts maintain that around one thousand years before the Aztecs stumbled across Teotihuacan, the city was built.

It is so ancient that it was already ancient to a civilization that is extremely ancient for us today.

Experts estimate that the city covered more than eight square miles at its peak, and as much as ninety percent of the total population of the valley resided in Teotihuacan.

Teotihuacan was unlike other cities at the time. In fact, no other city could compete with Teotihuacan when it was built. It was elaborately designed, intricately built, and “magically” finished.

The largest temple in the city is the so-called Pyramid of the Sun. Its original name remains an enigma.

But despite the fact we don’t know its original name, experts estimate the behemoth pyramid was erected in two distinct phases.

The first phase is thought to have started around 100 CE.

During this time, the Pyramid was constructed to nearly the size we see today.

The second phase saw the builders finish a pyramid that was 225 meters across, rising 75 meters high.

The second phase is when its builders added an altar on top of it. Once completed, the Pyramid of the Sun was the third-largest Pyramid in the world.

Another exciting feature about the Pyramid of the Sun is that, like many other pyramids around the globe, this monument, too, was built on top of subterranean cavities.

The Pyramid of the moon, worthy of its name, is the second-largest structure in Teotihuacan. Located at the end of the Avenue of the Dead, the Pyramid is connected to the rest of the city through a staircase.

It is believed that the Pyramid of the Moon was used in ancient times as a gathering place where the city rulers and priests would perform ritual sacrifices of animals as well as humans. It was also there where the priests would later bury the victims.

Archeological evidence and excavations suggest that the Pyramid of the Moon underwent around six renovations in ancient times, each of which added new features and elements covering the previous structure. Currently, seven different layers make up the Pyramid we see today.

The Pyramid of the Moon is 43 meters tall. From West to East, its base measures 147 meters, while in the North to South direction, it measures 130 meters.

The Pyramid of the Feathered serpent, although smaller, is equally as impressive as its larger two pyramids.

The Pyramid is flanked by representations of a feathered serpent, which later cultures identified as Quetzalcoatl or Kukulkan. In total, there are two hundred and sixty feathered serpent heads attached to the side of the Pyramid, carefully placed between the platforms. The temple of the Feathered Serpent was built as a six-layered step pyramid.

More than 75,000 artifacts have been discovered, analyzed, indexed, examined, and restored when possible.

But among the most surprising things discovered at Teotihuacan, none is as puzzling as Mica.

Mica in Teotihuacan, what was it used for?

Most of the Mica at Teotihuacan was found and removed from the Pyramid of the Sun in the 1900s. Because of its value, it was consequently sold.

“Mica is a mineral name given to a group of minerals that are physically and chemically similar. They are all silicate minerals, known as sheet silicates because they form in distinct layers. Micas are fairly light and relatively soft, and the sheets and flakes of Mica are flexible.”

However, traces of Mica were found on other structures at Teotihuacan, which suggests the material was not placed on the Pyramid of the Sun randomly.  The Palace of the Butterflies in Teotihuacan is home to various circles on its walls that were crafted from reflective Mica.

These have been interpreted by scholars as early representations of cosmic bodies.

But people are unaware of just how much Mica was actually discovered at Teotihuacan.

Today, Mica is used in numerous electronic appliances because it is a superior insulator.

In the electrical industry, Mica is mostly utilized as a thermal insulator. In addition to being used in the electric industry, Mica Minerals, which occur naturally on the Earth, are sometimes crushed and turned into a fine powder, later to be used in beauty products.

In total, it has been reported that as many as 37 kilograms of Mica have been found in Teotihuacan.

The nearly 37 kg of Mica found in Xalla was discovered in the form of plates, triangles, trapezoidal figures, rectangles, squares, circles, and small fragments and dust.

This is puzzling as experts have not completely understood the purpose of Mica in the Teotihuacan culture and why so much of the mineral was included in the buildings.

There is nothing we know for sure, apart from the fact that it was an “alien” material strongly controlled by the ruling elite of Teotihuacan. In the Florentine Codex (Sahagun, 1963, p.235), mica was considered a mineral with a golden glow that resists high temperatures; the Mexicas (Aztecs) seem to have called it metzcuítlatl or “Moon’s Excrement.”

There is evidence that Teotihuacan’s ruling elite developed a great interest not only in Mica but Jadeite as well. Both were considered exotic materials in ancient times.

But why the ruling elite of Teotihuacan developed such interest in Mica remains mostly unexplained.

The origin of the Mica used by Teotihuacan is debated.

Through archaeometric studies, researchers have found that the mineral from Xalla and Teopancazco is characterized and compared with sources of Mica in the Valley of Oaxaca and with Prehispanic Mica from the archaeological sites of Monte Albán, Cerro de las Minas, and Huamelulpan in Oaxaca.