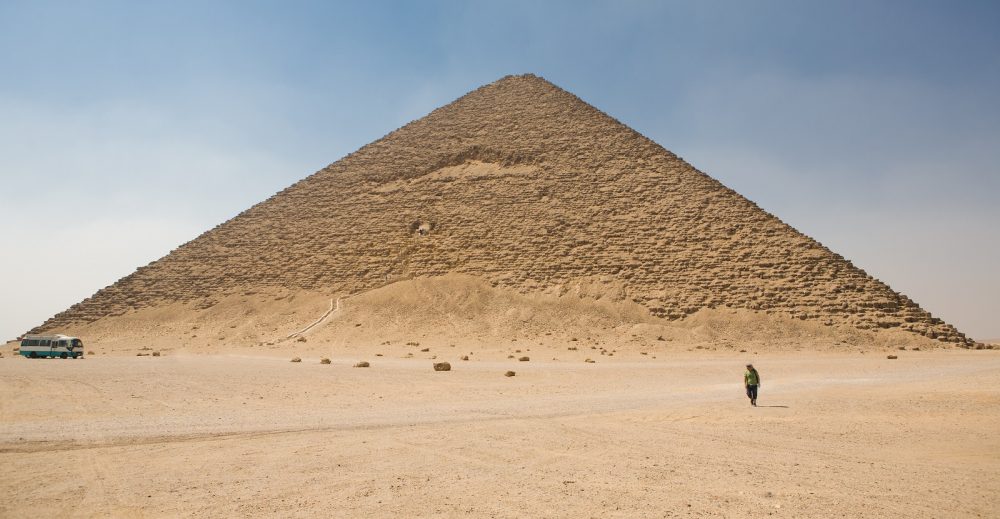 The Red Pyramid is the third largest Egyptian pyramid after those of Khufu and Khafre at Giza.

The first pyramid ever constructed in Egypt can be traced back to the third dynasty of ancient Egypt when Pharaoh Djoser ruled over the land. All pyramids were similar in shape, but each and every one of them was different in their own way.

The Pyramid of Djoser, for example, was ancient Egypt’s first colossal stone building. Archeologists argue the Step Pyramid of Djoser, designed by the royal vizier Imhotep, was the earliest large-scale cut stone production. Until then, never had anyone attempted in building such a supermassive structure.

The pyramid of Djoser would eventually have a total volume of 330,400 cubic meters (11,667,966 cu ft), which later pyramids would easily surpass.

Dubbed ancient Egypt’s proto-pyramid, the Step pyramid laid down the foundations for future pyramid building in Egypt. Revolutionary, refreshing, and big, the entire pyramid complex designed by Imhotep changed Egypt in more ways than one. The entire process that involved building the Step Pyramid was far more labor-intensive than any previous construction project involving mudbricks.

The successful completion of the project indicates that the state, as well as the royal government of the time, had a gasping level of control over not only resources but as well as the general population.

The start of the Pyramid Age

The finished pyramid complex of Djoser was unlike anything the ancient Egyptians had seen before. The size of the entire complex was staggering. According to Egyptologists, the pyramid complex was so large that it compared to a large city during the third millennium BC.

The success of Djoser’s pyramid complex echoed through later antiquity in the tradition that the Pharaoh, as well as his royal Vizier and architect Imhotep, were the inventors of ancient Egypt’s stone architecture.

Their success laid down the foundations of Egypt’s pyramid building era.

Djoser introduced a number of elements for the first time in his pyramid complex: the first colonnade, the first hypostyle, portico, life-sized statues, torus-molding as well as cavetto cornice, but most importantly the stone pyramid.

The Step pyramid was the centerpiece of the pyramid complex; a never-before-seen structure rising in six steps to a height of around sixty meters, contains as many as 330,400 cu. meters of clay and stone.

But Step pyramids were not that popular in Egypt, and the step-pyramid form soon transitions into a much more elegant, smooth shape: the true pyramid.

It might be expected that a long line of comparable step pyramid complexes would follow that of Djoser, but not a single Pharaoh managed to equal what Djoser had achieved.

Before the next successful pyramid was built, the land of Pharaohs saw several rulers come and go.

Eventually, numerous attempts of pyramid building saw the construction of the revolutionary structures move to Medium. There, archeologists argue that pharaoh Sneferu undertook a construction process that saw the step pyramid shape revolutionize.

The pyramid at Meidum was ancient Egypt’s first attempt at a straight-sided pyramid albeit unsuccessful. The structure collapsed in ancient times and archeologists argue it was never finished.

When Sneferu, the first king of the fourth dynasty, came to the throne around 2575 BC, the large royal pyramid built by Djoser was the only one standing.

Knowing this, the Pharaoh embarked on a mission that would see history remember him as the greatest pyramid builder in the history of ancient Egypt.

Eventually, Pharaoh Sneferu would become the most famous pyramid-building pharaoh in Egyptian history by constructing three massive pyramids; the one at Meidum and the two at Dahshur, as well a smaller provincial pyramid at Seila. Sneferu’s pyramids had a total mass of stone that even exceeds the Great Pyramid of Giza, believed to have been built by his son, Khufu.

For whatever reason, around the 15th year of his reign, Sneferu abandoned Meidum and traveled to Dahshur where he founded a new necropolis, where he would erect two of the most iconic pyramids in ancient Egypt; the Bent Pyramid and the Red Pyramid.

The Bent Pyramid of Sneferu was a unique structure. When the construction process at Meidum was abandoned, the ancient Egyptians had still no blueprint for a true pyramid. Sneferu’s reign was marked by experimental architecture, something that would eventually result in the first true pyramid of ancient Egypt.

Sneferu experimenting with pyramids is comparable to the time when Djoser constructed the first Step Pyramid. Before Djoser, there was no blueprint on how to build a step pyramid. But experimenting took Djoser from a mastaba to a step pyramid, revolutionizing architecture in Egypt forever.

The Bent Pyramid of Dahshur is the most unique pyramid ever built. No other pyramid similar as it exists anywhere in Egypt.

The bent pyramid is believed to have started off as a much smaller pyramid with a slope of around 60 degrees. The pyramid was redesigned and the builders wanted to achieve a pyramid with a slope ranging from 72 to 78 degrees, something that was certainly too steep for a true pyramid.

As structural problems appeared due to the extreme slope of the pyramid, the builders had to react quickly in order to prevent the pyramid from collapsing.

From around the middle of the pyramid, the builders continued building the structure at a much-decreased slope of around 44 degrees reason why the pyramid adopts its bent appearance.

The Pyramid was a success, but it was not a true pyramid.

Having learned from previous mistakes, Sneferu then commissioned the Red Pyramid.

While the Bent Pyramid shows clear evidence that its builders experimented with the structure during construction, the Red Pyramid exhibits none of that: it was a cleverly planned and accomplished construction built without any issues. The Red pyramid marked the successful transition between ancient step pyramids and smooth-sided pyramids that would dominate ancient Egyptian architecture in future generations.

The so-called Red Pyramid was the third pyramid built by Pharaoh Sneferu located around one kilometer north of the Bent Pyramid. The construction of the Red Pyramid is believed to have begun during the 30th year of the Pharaoh’s reign.

Archaeological excavations at the site suggest that the pyramid was completed in no more than 17 years. John Romer argues that based on graffiti on the site, the pyramid may have taken less than ten years from start to finish.

Egyptologists believe that the Red Pyramid is the direct outcome of architectural and engineering problems that the builders experienced during the construction of the Pyramid of Meidum, and the Bent Pyramid. Some scholars have come forward suggesting that it was the pyramid at Meidum the first attempt of Sneferu to build a smooth-sided pyramid. The researchers argue that the pyramid at Meidum may have collapsed when construction on the Bent Pyramid was already underway.

The Red Pyramid is also Egypt’s third-largest pyramid after those of Pharaohs Khufu, Sneferu’s Son, and Khafre, Sneferu’s grandson.

Although it is referred to as the Red pyramid, the pyramid was not always red. In fact, it was cased with extremely well-polished white Tura limestone, of which only a few stones remain, still in place at the pyramid’s based at the corner.

Unlike the capstone of many other pyramids, the capstone of the Red pyramid was found by archeologists. It was a simple culmination of the structure, a block of stone featuring no carvings or inscriptions, made of good quality limestone and not out of gold or silver as some imagine the pyramid’s capstones. The capstone, which has been recovered and reconstructed, is now on display at Dahshur. However, it is noteworthy to mention that some experts have doubts whether the capstone was ever sued on top of the pyramid as its angle of inclination differs from that of the pyramid.