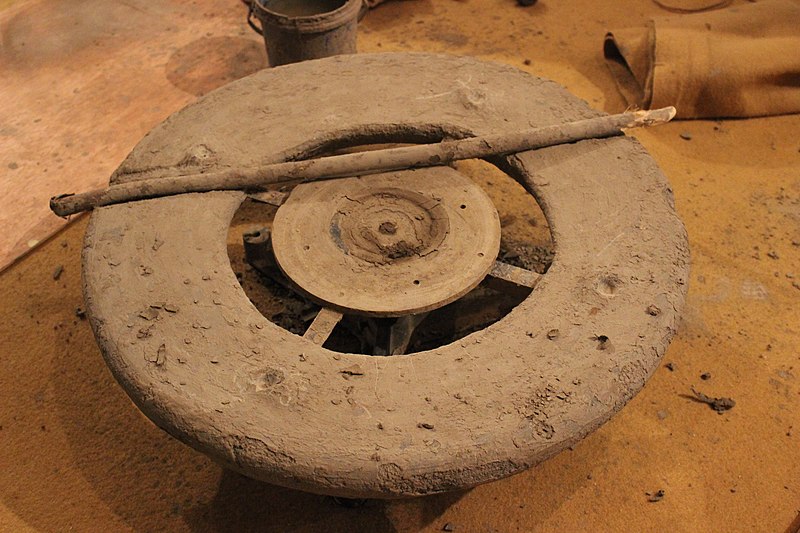 Some of the most basic tools and inventions in the development of civilization.

The ability to create and use tools was a defining mark in the evolution of humans. Over time, many of these tools progressed into more sophisticated instruments, while others became obsolete or were replaced by better technology. Some of the most ingenious primitive inventions are still in use today.

The advancement of tools played an instrumental role in building the greatest civilizations in history, laying the foundations for the modern world. In this article, we take a look at some of the basic instruments that shaped the world.

The onset of the Stone Age was a game-changer for our ancestors.  The first stone tools date back 2.6 million years ago and were created by early hominins. Named after what is now Olduvai Gorge in Tanzania, the Oldowan tools comprised the simplest objects such as hammerstones, choppers, and sharpened flakes.

The tools were made by splitting small rocks to create sharp edges. They were used to carry out the rudimentary functions of primitive hominin life, such as cutting up plants, butchering animal carcasses, and even some basic woodwork. As simple as this may seem, the development of these early stone tools was a major leap forward.

More primitive forms of tool use existed before the stone age. Earlier hominids used bones, sticks, and rocks to go about business. Even animals such as chimpanzees, elephants, and ravens are capable of basic tool use. But the manufacturing process of the Oldowan tools sets their makers apart. The deliberate and controlled fracturing of rocks using percussive blows reflects behavioral innovation (Groenevald, 2016).

Another interesting factor is that stone, being more resistant than organic materials such as bone and wood made for long-lasting tools. This was not only advantageous for their users, but we now have artifacts that provide key information about early humans and their predecessors.

Scientists aren’t sure who can take the credit for the Oldowan Industrial Complex. We know that Homo habilis, dubbed “the handyman,” is often associated with early toolmaking. But the first of these tools may have been developed by an even older hominin.

The oldest Oldowan artifacts were found in East Africa, and evidence of their use tracks across the continent, and into the Near East and Asia thanks to the exploits of Homo erectus.

The Oldowan industry became the precursor to the more advanced Archeulean complex which gave rise to the earliest hand axes, picks, cleavers, and knives. Archeulean tools became widespread across Africa, the Near East, Asia, and Europe and led to the manufacture of the first hunting weapons. From here on, the development of tools progressed exponentially through the ages. Remarkably, the Stone Age was responsible for ninety-nine percent of technological history (Toth & Schick, 2014).

The inventions of simple machines and a deeper understanding of mathematical principles led to some of the greatest feats in engineering history.  The simple machines formed the basis of all complex machinery and were designed to make life easier. As Archimedes said:

“Give me a lever and a place to stand and I will move the Earth”.

A simple machine is a basic instrument that changes the direction or magnitude of a force. In short, it is a simple device that does the heavy lifting so that you don’t have to. The six simple machines are the lever, the wheel and axle, the pulley, the inclined plane or ramp, the screw, and the wedge. Archimedes studied the working mechanisms of the lever, the screw, and the pully, and defined simple machines based on the realization that force can be amplified using mechanical advantage.

One of the earliest uses of the lever is evident in the shaduf – a primitive crane used to collect water. Drawings of the device found in the ruins of Thebes date back to 1250 BCE. But the shaduf was used as early as 3000 BCE in Mesopotamia where it is believed to have been invented. The shaduf had widespread use across the ancient world and is still in use today in some countries.

The Mesopotamians are also associated with the invention of the wheel. The first wheel and axle mechanism was crafted by the Sumerians in the potter’s wheel. About two thousand years later, the Ancient Greeks built the first wheeled carts.

Another notable Greek invention is the Archimedes screw – a device used to lift water. The invention of this ancient water pump was revolutionary, and the basic design is still in use today. But the Archimedes water screw may not have been the first of its kind. Evidence of similar technology can be traced to earlier periods in Assyria and Egypt where it was used in irrigation.

Some of the most Herculean tasks in history can be attributed to simple machines. Complex contraptions composed of ramps, levers, and pulleys were used in the construction and operation of Rome’s Colosseum.

Scientists recently discovered a ramp in an ancient Egyptian quarry at the Hatnub site. The find could be evidence that the Egyptians used ramps and pulleys to haul the massive stone blocks used to build the Great Pyramid of Giza.

Simple machines were involved in the construction of some of the most iconic architectural wonders of ancient times. And they are still used today in the development of the modern world.

A pivotal step in the advancement of civilization was the ability to navigate and traverse the oceans.

The history of sailing is as obscure as a misty day at sea. Prehistoric dugout boats were used in coastal areas during the Stone Age. The Egyptians built simple boats out of papyrus reeds to fish and navigate the Nile as early as 6000 BCE. But the first people to invent proper ocean-going vessels were the Austronesians. They ventured out to sea in catamarans and outrigger boats. And through their seafaring prowess, they were able to occupy the Pacific Islands.

Sailing technology was a major turning point in the expansion of humankind. It enabled international trade, exploration, and colonization.

Navigation instruments played a crucial role in this development. The first magnetic compass was invented in China around 206 BCE. But it was used for divination long before it was put to use in orienteering. And even when its navigational capabilities were discovered, the magnetic compass was merely a backup for when the celestial objects weren’t visible. But as the technology improved, it grew more reliable and became an essential navigational tool (Rodgers, 2013).

Before this, sailors used the stars, the position of the sun, and other landmarks to navigate. According to legend, the Vikings used “sunstones” to determine the position of the sun on cloudy days. And recent findings suggest there may be truth to the tale. Scientists discovered that birefringent crystals such as calcite and tourmaline can be used to detect polarized light from the hidden sun.

A research team used a computer program to simulate the Viking voyages. And the results show that it is completely plausible that they navigated using a basic sundial, a shadow stick, and the legendary crystals. This could explain how the master seafarers ruled the seas without a magnetic compass.

A major milestone in the progression of modern society was the process of recording and transcribing information. Stone Age humans of the Neolithic period used clay tokens to keep track of their commodities. The clay tokens were replaced by clay tablets upon which symbols were inscribed using a reed stylus. Millenia later, this practice evolved into writing.

The first true writing system was developed by the Sumerians about 5000 years ago. Other early writing systems include Jiaguwen, which originated in China during the Shang dynasty, and Olmec hieroglyphics from the Mesoamerican civilization. But cuneiform was the best-preserved writing system that can be traced from its primitive origins to the present day. An epic Sumerian poem called Enmerkar and the Lord of Aratta, from 1800 BCE provides a famous early account of the development of writing:

“Because the messenger’s mouth was heavy and he couldn’t repeat, the lord of Kulaba patted some clay and put words on it, like a tablet. Until then, there had been no putting words on clay.”

The Development of Writing

By 3000 BCE the Sumerians were creating phonetic signs and developed the first spoken language. Interestingly, a growing concern for the afterlife played a major role in the development of writing. Initially, writing was only used for accounting purposes. It made the leap to literature when the Sumerians started using cuneiform for funerary inscriptions.

Cuneiform writing ultimately influenced the development of other ancient forms of writing and language, including Egyptian hieroglyphics, Indus Script, and early forms of Greek and Semitic.

The Concept of Time

One of the intrinsic aspects of modern society is our domination by the construct of time. Early humans tracked the passage of time by simply observing daylight, seasonal changes, and herd migrations.

The practice of time-tracking can be linked to the advancement of astronomy. The Sumerian calendar  – often credited as the first formal calendar, divided the year into twelve months of 29 or 30 days. Each month began with the sighting of the new moon – a practice still in place among some cultures today.

But humans were recording lunar cycles much earlier. The oldest lunar calendar was discovered in a French cave dating back around 15 000 years ago.  This predates the prehistoric moon map unearthed in Ireland and the Mesolithic monument in Scotland built by hunter-gatherers to track the phases of the moon.

Many ancient civilizations used celestial objects to track time.  As true pioneers of civilization, the Egyptians were among the first. They built huge obelisks around 3500 BCE and used the shadows cast by the monoliths to divide the day into hours. These early shadow clocks led to the invention of the sundial, which ultimately became the first portable timepiece.

The Egyptians used several other time-keeping instruments, including the merkhats, which approximated the time based on the alignment of the stars. An advantage of the merkhat was that it could be used at night.

Water clocks, known as clepsydrae, were widely used in many parts of the ancient world. The clepsydra measured time against the regulated flow of water between two vessels. The oldest known water clock was found in the Karnak temple and dates back to the reign of Amenhotep III. And finally, we have Plato to thank for the bane of modern-day existence. The first alarm clock was developed in Ancient Greece using water clock technology. Plato invented the first alarm clock so that his students could wake up in time for early morning lectures.

Such historic finds provide us with a fascinating glimpse of the past and useful insights into the development of technology. These are some of the basic instruments that shaped our world. But ancient humans were capable of even more complex technology, some of which were advanced beyond their eras.

Artifacts such as the Baghdad Battery and the Antikythera mechanism are testament to the innovative capabilities of our ancestors during times of limited resources. These precursors of modern technology cultivated the seeds of progression in a rapidly evolving civilization.