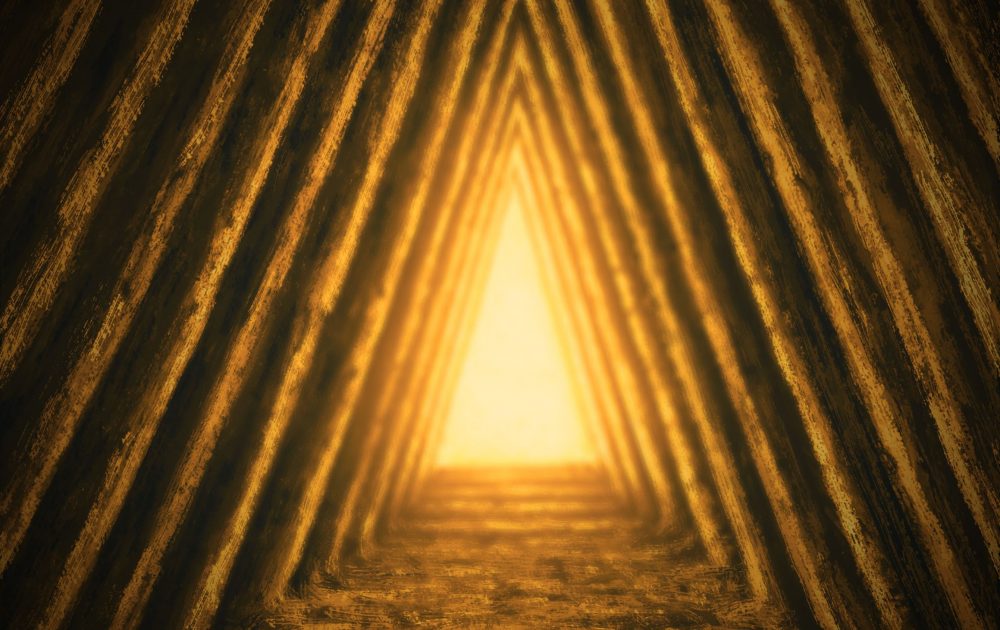 Explore the mysterious interior of the Great Pyramid of Giza with these three stunning videos.

Though to have been built more than 4,500 years ago during ancient Egypt’s Fourth Dynasty reign of King Khufu, the Great Pyramid of Giza is the most famous pyramid on the surface of the planet.

Shrouded in mystery, the Great Pyramid has still not revealed all of its secrets despite have been studied for hundreds of years. We still have no clue as to its exact purpose.

Egyptologists maintain the Great Pyramid–as well as all Egyptian Pyramids–served as tombs for the Kings of Egypt. They say that the pyramid monument is the direct result of a long line of preceding monuments, among which the most important is the mud-brick mastaba.

The birth of the pyramid in Egypt can be traced back to around 4,700 BC during the Third Dynasty.

During the reign of Djoser, a young architect is thought to have experimented with construction plans and eventually created the Step Pyramid.

What started as a morphed mastaba eventually turned into the Step Pyramid of Djoser. It is believed that the young architect, a man called Imhotep, who was also Djoser’s royal Vizier, designed, planned, and built the pyramid in no more than 19 years.

Eventually, other pyramids were built in Egypt. However, several generations after Djoser passed until another pyramid was built.

The second successful pyramid though to have been constructed in Egypt, was the Pyramid of Fourth Dynasty King Sneferu at Meidum. There, the Pharaoh commissioned the construction of a kind of stepped pyramid.

When it was completed, he turned to Dahshur, where he commissioned another two.

The Bent Pyramid is one of the best examples of pyramid evolution in Egypt. The experience of building the Bent Pyramid eventually led to the construction of the first successful smooth-sided pyramid in the history of Egypt, the Red Pyramid at Dahshur.

This pyramid is thought to have laid down the foundations for constructing the Great Pyramid of Giza, a monument that King Khufu–Sneferu’s son–is believed to have commissioned.

Once completed, the Red Pyramid of Sneferu was the largest pyramid built to that date.

The birth of the Great Pyramid

“It is said that the stone [used in the construction of the Pyramids of Giza] was conveyed over a great distance … and that the construction was effected by means of mounds … The most remarkable thing is that, though the constructions were on such a great scale and the country round about them consists of nothing but sand, not a trace remains either of any mound or of the dressing of the stones, so that they do not have the appearance of being the slow handiwork of men but look like a sudden creation, as though they had been made by some god and set down bodily in the surrounding sand.” –Diodorus Siculus, Book I, first century BC.

Egyptologists have maintained for decades that Khufu built the Great Pyramid of Giza and that the structure was completed in no more than 20 years. Evidence supporting the theory that Khufu was the man who built the pyramid is inconclusive, despite academics claiming differently.

Evidence of Khufu being the constructor of the Great Pyramid is, according to experts present within the pyramid itself. They point to “quarry marks” –crudely drawn ancient graffiti–in the cavities located above the roof of the so-called “King’s Chamber.”

However, these writings are not very helpful to confirm that Khufu is the man who commissioned the pyramid. If Khufu was really the man who ordered the construction of the greatest pyramid Egypt would ever see, why are there no ancient texts of any kind inside the Great Pyramid attributing the pyramid to Khufu?

Furthermore, if the pyramid is the greatest architectural achievement of Khufu, why are there no ancient texts whatsoever that mention King Khufu and how he built the pyramid during his reign.

Would a king not be proud of building a structure like the Great Pyramid? Would a King not made sure to record his incredible achievement for future generations to remember him?

Some of these stones weigh dozens of tons, and some blocks weigh more than 30 tons inside the Great Pyramid.

Experts have estimated that the Great Pyramid of Giza has a total weight of around 6.5 million tons.

Scholars say that once completed, the Great Pyramid of Giza remained the largest standing human-made monument in the history of the planet for more than 3,800 years.

Furthermore, during Napoleon’s campaign in Egypt, after studying and seeing the Pyramids, Napoleon calculated that the Great Pyramid of Giza and its neighboring structures held enough stone to build a wall 3 meters high and 1-meter thick which would completely enclose the country of France. A mathematician corroborated napoleon’s calculations.

If all the stone of the Great Pyramid of Giza were sawed into blocks measuring I foot square, and these blocks laid end to end, they would stretch two-thirds of the way around the Earth at the Equator.

The Pyramids of Egypt are not accidental structures, and nothing about them is ordinary. Having that said, we need not connect them to otherworldly theories but realize that their purpose and history far exceed the accepted vision scholars propose.

The Great Pyramid can be regarded as the most perfect of all pyramids built in Egypt. Among its many fascinating characteristics, this towering monument that reaches towards the sky with a height of 138.8 meters is the only known eight-sided pyramid in existence.

Among the approximately 120 pyramids in Egypt, this is the only pyramid with ascending and descending passages.

However, its monstrous size and unique appearance is perhaps not the most impressive characteristic the Great Pyramid boasts. More astounding is the mindboggling precision that is built into its very core.

Somehow, and not by chance, the Great Pyramid of Giza was positioned no more than a mile to the south of latitude 30, which is almost exactly one-third of the way between the equator and the planet’s north pole.

Also, the Great Pyramid builders made sure for the corners of the monument to be nearly perfect right angles.

Furthermore, the Great Pyramid of Giza was aligned to the cardinal points with a mind-bending precision: the average deviation from true north being just over 3 arc minutes.

The Pyramid’s exterior is perhaps just as stunning as its interior.

Evidence of how mysterious the Great Pyramid of Giza really is was proven not long ago by the ScanPyramids project, which discovered not only thermal anomalies inside the Great Pyramid but evidence of previously unknown chambers inside, which means that whatever we thought we knew about the Great Pyramid could be just a small part of its massive, hidden treasure.

Here are three videos showing just how amazing the Great Pyramid of Giza is, both on the outside and the inside.