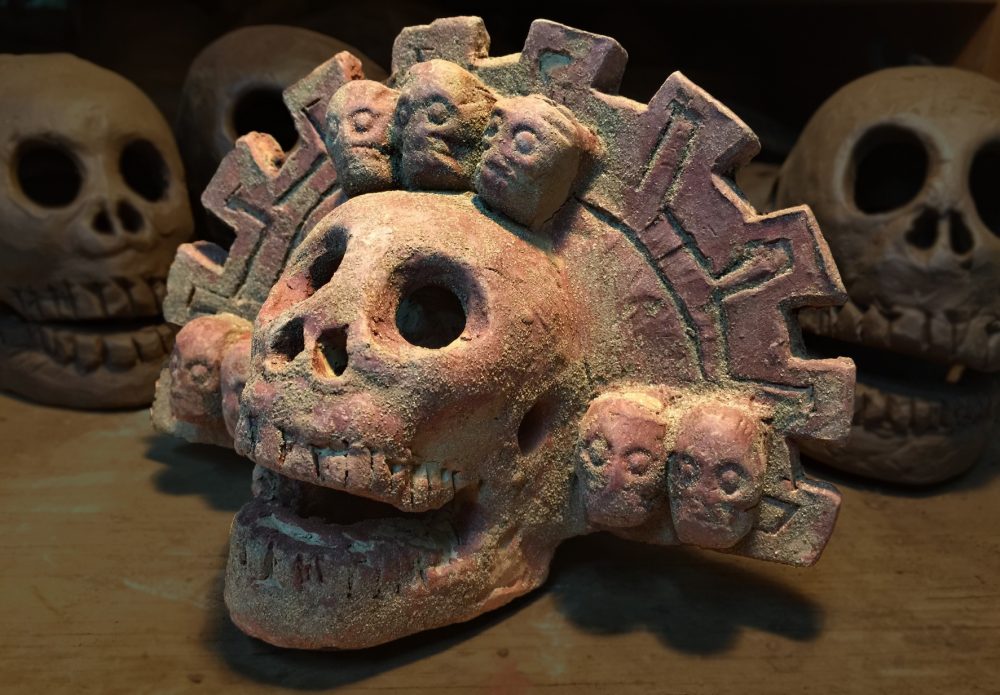 The Aztec Death Whistle was a powerful yet scary artifact used both in Aztec warfare and religious ceremonies across the Aztec Empire.

What made the Aztec Death Whistle striking is not the strange skull-shaped item but the belief that it was a powerful instrument of psychological warfare, as well as its shrilling haunting sounds reminiscence of ghosts.

The item discovered by archaeologists hundreds of years ago at an Aztec temple of the wind god Ehecatl was in the hands of a sacrificed male skeleton in Mexico. The Aztec Death Whistle was originally believed to be a mere ornament, and its obvious importance was not recognized in the distant past.

Many years after its discovery, it was suggested that the curious whistle might have been a powerful instrument the Aztecs used during sacrifices, ceremonies, and battles to instill fear in the enemy’s hearts.

Maya, Aztec, Inca, Andean as well as Mesoamerican cultures are gifted with the production and use of great wind instruments such as flutes, whistles, and aerophone artifacts. These are made of clay, bone, stone, and metals, most of which play esoteric rituals roles.

The death whistle was first discovered in the hands of a 20-year-old man buried at the temple of the wind god Ehecatl at the archaeological site of Tlatelolco. The burial tombs were of Mesoamerican origin. The man held two skull-shaped whistles, one in each hand.

History has it that ancient Aztecs used the death whistle as an important tool for sacrifice and rituals. They were commonplace in burial rites for rituals. It was believed that those who died might have needed the objects to get into the spirit world with ease.

Some experts maintain that the death whistles were blown just at the killing of a victim, while the haunting sounds guided the souls into the afterlife. Sometimes, the victim carries the whistle symbolical as lord of the Night Wind as the weird wind of the night hurries the soul off the street.

When it comes to making the haunting sounds, the air flows inside the cavity of the whistle to create organic fluctuations of pressure, which generates their unusual sounds. These sounds could be likened to stormy winds with chaotic effects.

To make the sound, you simply blow in the mouthpiece. The air goes into the whistle, changing pressure and producing sounds. As soon as the sounds get into the chaos chamber, the vibration generates the strange death whistle before exiting the bottom. The sounds vary from animal growls, calls to shrills.

There is a general belief that the Death Whistle was a powerful tool of psychological warfare, especially to instill fear in the hearts of the enemies. The Aztecs were legendary warriors, and they often carry death whistles like a pendant. History has it that they hide in dense jungle to blow the whistle just before they attack a tribe or village. They use it to invoke psychological fear and scare the enemies before the battle, especially when hundreds of whistles are blown in unison, weakening the enemies’ resolves.