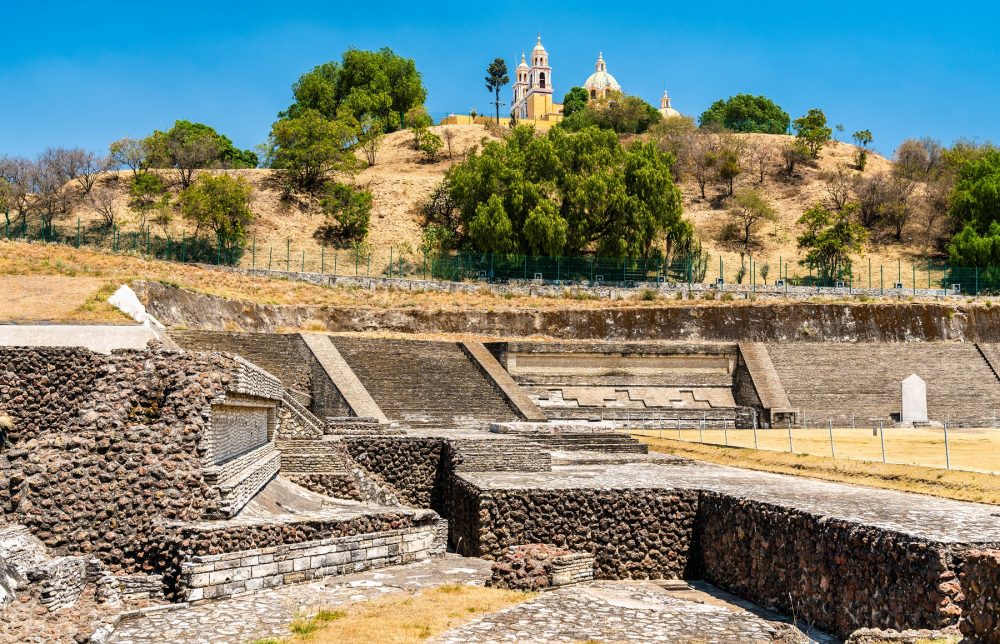 Just as we don't have ancient texts mentioning the construction of ancient Egyptian pyramids, we have a complete lack of records when it comes to the largest pyramid on Earth, the Great Pyramid of Cholula. Legends say the massive pyramid was built by Xelhua, one of the giants of the "time of the universal deluge."

There are pyramids scattered all across the globe. Some of these pyramids are massive; others are no more than a few meters high. They come in all shapes and sizes. From stepped pyramids—like that of Djoser—to massive pyramids such as the Great Pyramid of Khufu, the perfect smooth-sided pyramid.

Some pyramids challenge our very understanding of what these structures should look like. One such example is Borobudur in Indonesia.

Despite the difference in pyramids, many of them are eerily similar in design.

For example, some of the pyramids located in Asia are eerily similar to pyramids halfway around the world in Central and South America.

For example, pyramids in Myanmar resemble pyramids in the Yucatan region of Southern Mexico.

Another mind-boggling example is the Pyramid of Chichen Itza, which looks similar to Egypt’s first pyramid—the Step Pyramid of Djoser—which is similar in design pyramids found in Cambodia.

There are thousands of pyramids in America and twice as many in Asia and Africa. There are even pyramids in Europe.

Although perhaps the most famous pyramids are those of Giza in Egypt, the truth is that the majestic Pyramids near Cairo are not the largest on Earth, nor are they the oldest ever built.

If we were to look for the oldest pyramids on Earth, we would need to turn to South America, more precisely Brazil, to find that some 5,000 years ago, an ancient culture erected pyramids rising to the stars.

The largest Pyramids are located in Central America.

Not far from Mexico City—what was once Tenochtitlan, the capital of the ancient Aztec Empire—is a pyramid unlike any other on Earth.

It is the largest pyramid ever built by human hands.

According to the Guinness Book of World Records, this massive pyramid—called the Great Pyramid of Cholula-—is the largest pyramid in terms of volume and the largest monument ever constructed anywhere in the world, with a total volume estimated at over 4.45 million cubic meters.

This means that the Pyramid of Cholula, also referred to as Tlachihualtepetl, is even larger than the Great Pyramid of Giza, which has a volume of 2,583,283 cubic meters.

The Great Pyramid of Cholula stands 55 meters (180 ft) above the surrounding plain and measured 450 by 450 meters (1,480 by 1,480 ft). Unlike the pyramids of Egypt, which Egyptologists claim was tombs of ancient Pharaohs, the Pyramid of Cholula was built as a temple dedicated to Quetzalcoatl, the “feathered serpent.”

Linked architecturally to Teotihuacan’s mysterious city, which is also home to fascinating pyramids, the Great Pyramid of Cholula was a vital religious center in pre-Columbian America.

Experts say that over a thousand years before the Spanish Conquest, various construction phases gradually built up the bulk of the pyramid until it became the largest in Central America in terms of volume.

The massive pyramid temple is thought to have been constructed in four different stages, the first of which is believed to have started around the third century BC lasting to the ninth century AD.

The pyramid, its surrounding temples, and the ancient site where the city is located were important. Experts estimate that at its peak, the city of Cholula was home to the second-largest population in pre-Columbian Mexico, with an estimated 100,000 inhabitants.

In the eighth century, residents would eventually abandon the Great Pyramid, with the city suffering a drastic population drop. Then, in the twelfth century, the Toltecs conquered the city, and the pyramid’s religious importance ceased. Nonetheless, during the Postclassic period, the locals still considered the pyramid of great importance.

When the Spanish came to the city, the pyramid was overgrown, covered in vegetation, and unrecognizable.

In the 16th century, without knowing what lay beneath the surface, the Spanish built a church on top of the overgrown pyramid. This is the Iglesia de Nuestra Señora de Los Remedios (Church of Our Lady of Remedies).

The church remains in function today. It is a major Catholic pilgrimage destination.

Because of the importance of the church located atop the pyramid, archaeological excavations have not fully excavated and studied the ancient structure beneath.

Despite limited archeological excavation, experts have discovered that inside the pyramid is a network of tunnels stretching around eight kilometers in length.

Tlachihualtepet is part of the larger archaeological zone of Cholula that encompasses around 154 hectares. The pyramid site accounts for only six hectares.

The construction of Tlachihualtepet most likely began in the Preclassic period, and a total of six stages saw the completion of a six-stepped structure.

The pyramid is so striking that the ancient Aztec folklore reported a giant built the monument. According got experts, the Postclassic Aztecs thought that Xelhua built the Great Pyramid of Cholula. Xelhua is one of the seven giants in Aztec mythology who escaped the flood by ascending Tlaloc’s mountain in the terrestrial paradise.

The importance of the pyramid is undisputed. It remained an important religious and worship center even after the city of Cholula declined.

We know that ancient civilizations in Mesoamerica developed writing. The Aztecs developed a pictographic system used to convey a message. The Aztecs adopted this writing system from other writing systems used across Central Mexico, like Zapotec writing.

But this writing is of the Aztecs. The Pyramid of Cholula could be contemporary to Teotihuacan and its pyramids.

The thing is, we don’t know who built Teotihuacan and its pyramids. However, experts have revealed that the earliest construction phase of the Pyramid of Cholula features talud-tablero architecture characteristic of the region, so it is strongly associated with the ancient city of Teotihuacan its pyramids.

Teotihuacan and its pyramids are also shrouded in mystery. The city is thought to have been established around 100 BC, but since there are no writings left behind, we don’t know who established it nor why. The name Teōtīhuacān was given by the Aztecs centuries after the fall of the city. We have absolutely no idea what the city was called in before that.