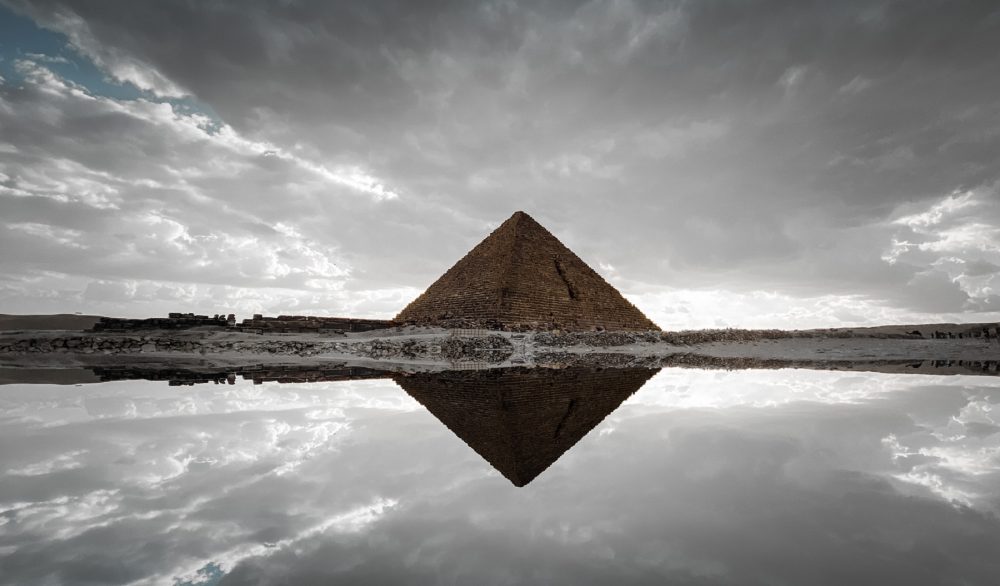 People are left awestruck by these majestic, ancient structures for different reasons. To some, the ancient Egyptian pyramids–especially those at Giza–are fascinating because of their size. Others would say that the many mysteries surrounding them are their most captivating point. A third would say that their precision, architecture, and engineering is what gives them a special aura.

Whatever the case, the Pyramids are, and have been for centuries the most mysterious structures ever built by human hands.

However, Egypt’s pyramids were not always built. In fact, throughout the vast history of the ancient civilization, pyramids occupy only a small part.

Mainstream experts argue–with inconclusive evidence–that the oldest pyramid of Egypt is that of Djoser. Constructed in the royal necropolis of Saqqara, is argued that the Step Pyramid of Egypt came into existence around 4,700 years ago, during Egypt’s Third Dynasty.

Egyptologists tell us that it was then when abruptly, and out of nowhere essentially, and Egyptian King invented a tomb like no other.

For generations were Egyptian Kings entombed in structures known as a mastaba.

Mastaba or pr-djt which means house of eternity in the ancient Egyptian language, mastabas are essentially flat-roofed, rectangular structures with inward sloping sides. Most of these mastabas were built of mid-bricks.

Mastabas were important in ancient Egyptian history because it was believed that the soul could only live if the body was preserved from corruption and depredation as well as fed.

It is believed that mastabas started being built in Predynastic times, and were constructed in later dynasties during which the tombs evolved.

Mainstream Egyptologists tell us that Pyramids are essentially an evolution to mastabas.

Take for example the Step Pyramid of Djoser.

As noted by Ahmed Fakhry, a prominent Egyptologist, the Step Pyramid of Djoser underwent a number of construction phases and it all started as a mastaba.

Prior to workers constructing the first mastaba, a shat was sunk into the bedrock 28 metes deep, 7 meters wide. This would later become the access to the vast, 5.7-kilometers long subterranean world beneath the pyramid.

Above it, the builders created the first mastaba but it was unlike any other built previously: this mastaba was made of stone. When the architect of the project–believed to have been Imhotep–decided to add additional mastabas above the original one, the builders were tasked with adding to the ground area for the superstructure at the northern side.

This mean that the original entrance and stairway leading to the subterranean world had to be blocked, and a new entrance was built further north.

The original mastaba made essentially out of stone was a first-of-a-kind monument since it was shaped like a square with each side measuring around 63 meters in length. The structure is believed to have had a height of around 8 meters, and its core consisted of locally quarried limestone.

But this would not be the finished mastaba. Eventually, Imhotep decided to add to the original structure. A few years after the initial mastaba was finished and cased with limestone, the builders were tasked with extending the structure three meters to all sides.

A second addition–about 9 meters on the eastern side–eventually turned the monument into a rectangular mastaba. Before the mastaba was cased with new limestone, they extended each side an additional three meters. This warped mastaba now became the lower stage of a step pyramid consisting of four superimposed mastabas built one atop the other.

However, the architect was apparently not done.

Imhotep was apparently not satisfied with the structure he had built.

Eventually, Djoser’s royal architect and vizier tasked the builders to add more structures on top of the four steps. The final construction phase saw builders create a pyramid measuring 140 meters from east to west, and 118 meters from north to south. The finished Step Pyramid is thought to have stood a little over 60 meters in height.

The entire monument was cased with extremely polished white limestone, which made the Step Pyramid–a royal mastaba topped by 5 structures–shine like a star as the was reflected off of its surface.

With the Step Pyramid finished, the soul of the Pharaoh could now climb to the heavens as on a shinny massive staircase. When the Sun-god Ra arose, his first ways would greet the summit of the eternal adobe of the Pharaohs, who was himself divine.

With a total volume of 330,400 cubic meters (11,667,966 cu ft), the Step Pyramid is considered the largest and oldest cut-stone construction in Egypt.

The above story (his-story?) is how Egyptologists see the birth of Ancient Egyptian Pyramids.

They see them as tombs, and no more than tombs, which resulted in the evolution of mastabas.

However, if Pyramids–the Step Pyramid of Saqqara being the perfect example–are the result of the architectural evolution of mastabas, why were mastabas then built for thousands of years after Djoser?

If the ancient Egyptian rulers were entombed in mastabas for generations before Djoser, and Djoser introduced a new “tomb”, why don’t we see more tombs like that of Djoser?

The truth is there isn’t one pyramid that was built like that of Djoser. It might be expected that Djoser’s successors would build more pyramids like that od Djoser, but the truth is that Step Pyramids in Egypt were anything but popular.

One would expect a long line of comparable step pyramids after Djoser, but although some elements did endure, the step pyramid and its shape did not.

In fact, it wasn’t until the rule of the Fourth Dynasty King Sneferu that Egypt would have another pyramid. During Sneferu’s reign, the Step Pyramid as introduced by Djoser disappeared entirely. Sneferu built three pyramids and the Red Pyramid at Dahshur became Egypt’s first smooth-sided pyramid.