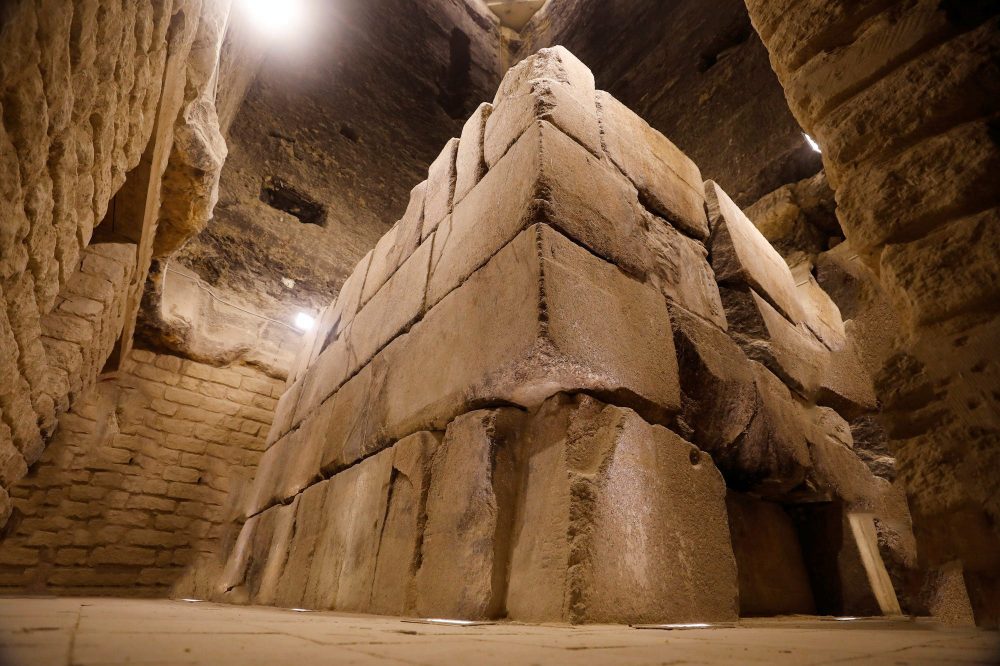 Check out 3 stunning videos showing the interior of Egypt's most ancient pyramid, the Step Pyramid at Saqqara.

One of the oldest pyramids in Egypt, the Step Pyramid of Djoser, is one of the least known and least visited monuments of ancient Egypt. That’s because it remained closed for nearly a decade-and-a-half for tourists. Only recently was the pyramid reopened for tourists.

The Pyramid hides many interesting facts that shed light on early pyramid development in Egypt.

The history behind the Step Pyramid of Djoser is truly stunning. According to Egyptologists, the pyramid was commissioned by the Third Dynasty Pharaoh Djoser, around 4,600 to 4,700 years ago. He chose the royal necropolis of Saqqara, some 60 kilometers away from the Giza plateau, and ordered his royal architect and vizier Imhotep to build a stunning monument. What Imhotep envisioned changed ancient Egyptian architecture in more ways than one.

The Step Pyramid Complex at Saqqara is regarded as ancient Egypt’s earliest colossal stone building, and the Step Pyramid—a proto-pyramid—is seen as the earliest large-scale cut stone construction in the history of Egypt, and probably in the world, although the South American Pyramid Complex in present-day Peru, Caral, is contemporary with Djoser’s master monument.

Djoser probably reigned long enough to see his pyramid complex “come to life.” Egyptologists maintain that the entire construction project was finished in no more than 19 years, and Djoser is thought to have ruled for 19 years at least.

Djoser’s step pyramid is astonishing in more ways than one, but mostly because it marks a clear departure from previous ancient Egyptian architecture. Furthermore, the pyramid complex sets several important precedents, perhaps the most important of which is its status as the first monumental structure made of stone.

Building such a massive pyramid complex was by no means an easy task. Djoser’s Step Pyramid Complex covers 15 ha (37 acres) and is about 2.5 times as massive as the Old Kingdom town of Hierakonpolis.

However, its significance does not lie only in its size but the fact that such a construction project was far more labor-intensive than any other monument predating it. The successful completion of the pyramid complex clearly shows that the royal government of Djoser had an unprecedented level of control not only over material resources but human as well.

Although the monument in the form of a pyramid appeared abruptly and surprisingly, the structure itself is belive to draw ideas from various precedents the most important of which is a mud-brick mastaba (3038) which was completed around 2,700 BC. In fact, this early monument would have been a step pyramid had its builders not left one of the sides uncovered.

A pyramid unlike any other

The Step pyramid was a completely revolutionary structure that the people of Egypt had never before seen. The Pyramid itself is thought to have been but in six distinct stages, which hints at an experimental structure.

According to archaeologists, the Pyramid started off as a “square mastaba” which was gradually enlarged. The builders worked from the core of the proto-pyramid and enlarged it evenly on all four sides, turning the initial square mastaba into a larger structure that retained its square shape. Then a change in construction saw the builders enlarge it just on the eastern side.

The mastaba structure was constructed in two distant phases, fist forming a four stepped structure and then forming a six-stepped monument with a rectangular base on an east-to-west axis.

Since the initial mastaba was square, it has led experts to believe the monument was never meant to be a mastaba, since not one square mastaba has been found in Egypt.

The stones used in the construction of the pyramid and its temples originated from nearby quarries and were transported, by unknown means, to the construction site. Since there are no written records dating back to the time the pyramid was built, we can’t really know what kind of tools and techniques were used to transport and raise the stones (some of which weighed several tons) to form the six-step Pyramid. It is believed that the ancient Egyptians made use of rollers made of wood to move some of the heavier stones from the quarries to the pyramid.

A massive subterranean labyrinth beneath

Although the above-ground elements of the pyramid complex are astounding in more ways than one, what lies beneath the pyramid is worthy of amazement. Beneath the Step Pyramid, the ancient builders constructed (excavated) a subterranean labyrinth of tunnels chambers, magazines, rooms that total almost six kilometers in length. This underground labyrinth was connected to the pyramid with a central shaft 7 meters square and 28 meters deep.

Never again would such a massive subterranean world be built beneath a pyramid. Despite the absence of a similar structure in later pyramids, the entrance to the 28-meter shaft was built on the northern side of the pyramid, a trend that would remain throughout the Old kingdom.

The chambers and tunnels beneath the Step Pyramid revealed fascinating, yet somewhat surprising things. One of the most precious discoveries are 40,000 stone vessels. The interesting part is that many of these artifacts predate the rule of Djoser. The King’s mummy has never been found, and archeologists argue the mummy together with its countless offerings for the afterlife were stolen by looters in ancient times.

However, if this is the case, why did some objects remain, while others did not? If all treasures were taken together with Djoser’s mummy, why did some artifacts remain behind?

Another stunning find was the hipbone of a young woman. This hipbone, like many of the artifacts, predates Djoser by several generations.

The Step Pyramid built by Djoser is a striking ancient example of early Egyptian architecture. Not only does it introduced the pyramid monument into ancient Egyptian architecture, but it also paves the way for even better examples of pyramids and massive stone-cut monuments in Egypt.

While it provides many factful details on ancient Egypt, it still leaves us with many enigmas.

Why a pyramid? Why such a massive monument? How was all of this achieved at a time when technologies such as the pulley or the wheel did not exist in Egypt? Were ancient Egyptian pyramids tombs for the pharaohs, or did they have another purpose?

Whatever its purpose might have been, it is fascinating to know that an ancient monument such as the Pyramid at Saqqara has stood the test of time, standing as evidence of a time when great civilizations existed on Earth.