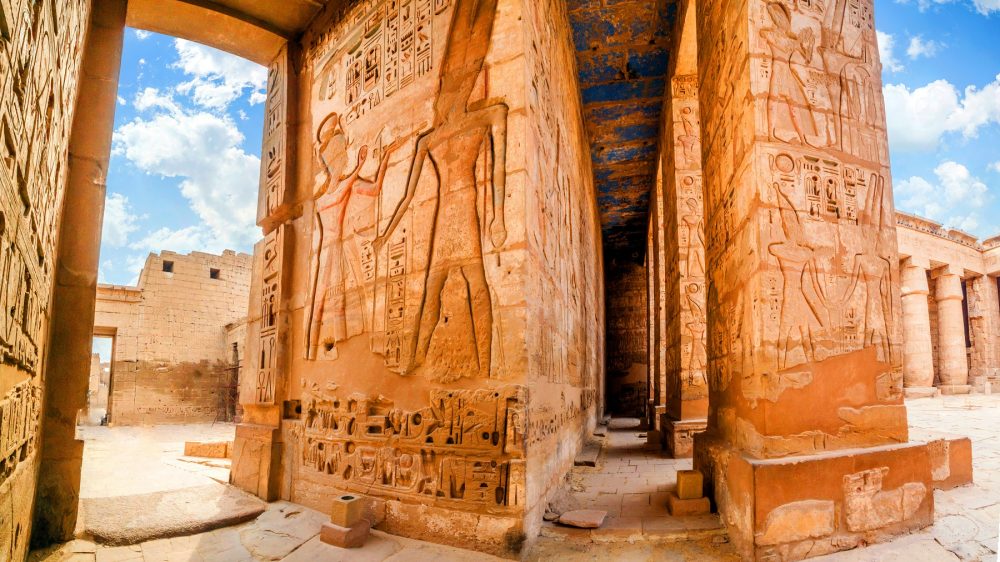 Before the pyramids in Egypt were built, sprawling ancient settlements existed in Egypt, here are some of the oldest and most important.

Of all ancient cities in Egypt, none is perhaps as important and majestic as Hut-Ka-Ptah. We are talking about Memphis, one of the oldest and most significant cities ever established in Egypt.

Located at the entrance to Nile River Valley not far from where the Pyramids of Giza stand today, this ancient city served as the capital of the ancient Egyptian civilization and was one of the most important religious centers in the entire country.

Also dubbed Inbu-Hedj which means White Walls, the city was renamed into Men-nefer—the enduring and beautiful—by the time of the Old Kingdom.

Eventually, its name would be translated from Men-nefer into Memphis by the ancient Greeks.

Like many other aspects of ancient Egyptian history—especially concerning its Early Pre-Dynastic History—the origins of Memphis are shrouded in mystery. It is believed to have been founded by Pharaoh Menes more than 5,200 years ago. Menes was the King who successfully united Upper and Lower Egypt into a single country.

Eventually, Kings that would follow in the Early Dynastic Period and the Old Kingdom ruled from Men-nefer. But even when Pharaohs would move the capital away from Memphis, the city remained an important cultural, religious and commercial center.

Its importance is attested by the fact that it remains present in Egypt’s historical records all the way from the Predynastic era well into the Ptolemaic Dynasty.

Scholars argue that the city—a settlement?—may even have existed earlier than Pre-dynastic Egypt, and some argue that it was inhabited already circa 6,000 BC. This means that the city, or at least its early foundations are more than 8,000 years old.

This isn’t surprising taking into consideration that the city was founded at the entrance to the fertile Nile River Valley.

Manetho wrote that the city was created by Menes after having unified upper and lower Egypt. At the time, the city was known as Hut-Ka-Ptah, which translates into ‘Mansion of the Soul of Ptah.’

Historically speaking, it is one of the most important cities in Egypt. Alexander the Great is thought to have been crowned Pharaoh of Egypt at Memphis. Furthermore, the famous Rosetta Stone—the stele which unlocked the secrets of ancient Egyptian writing—is believed to have been crafted in the city.

Memphis is thought to have reached its peak during the 3rd dynasty during which Pharaohs Djoser came to the throne, and established not far from the city the Pyramid of Saqqara. This monument became the very first stone building in Egypt, designed, planned and built by Djoser’s royal Vizier and architect Imhotep, a man who would later in history become associated with the Greek god Asclepius.

The importance of Men-nefer is further demonstrated by the numerous cemeteries dating back to the Early Dynastic Period and the Old Kingdom, placed along the desert bluffs to the west.

Although Memphis may have been an extremely important city throughout the history of Ancient Egypt, other cities have been founding predating it.

Perhaps not as important as Men-nefer, several other ancient cities have been found throughout the years that are evidence of Egypt’s extensive history.

One such city was unearthed by archaeologists in 2016.

Located in Upper Egypt’s Sohag province lie the remnants of a city that predates the Egyptian Giza Pyramids by around 3,000 years. Residential buildings, as well as a nearby cemetery, have been dated by experts to around 5,316 BC.

The importance of the city lies in the fact that it could provide much-needed information about Abydos.

The city is thought to have been inhabited by high-ranking Egyptian officials as well as grave builders. Among its ruins, archeologists uncovered iron tools, pottery fragments as well as more than a dozen giant tombs.

In fact, the tombs are so large that experts have revealed that the cemetery is larger in some instances than the royal graves of Abydos, which date back to the first dynasty.

Egyptologist Chris Eyre from the University of Liverpool told the BBC when the city was discovered that: “About a mile behind where this material is said to be we have the necropolis with royal tombs going from before history to the period where we start getting royal names, we start getting identifiable kings. This appears to be the town, the capital at the very beginning of Egyptian history.”

Some cities are old, some are older than history, and there are those that are both that, and still elude archaeologists.

One such example is the ancient city of Thinis, the capital of the first dynasties of ancient Egypt. The city’s exact location remains unknown, but its existence is well attested by ancient writers including Manetho. Mainstream experts believe the city’s remnants to be located near the ancient city of Abydos.

The city was most likely the capital of Pharaoh Menes who united Egypt. Its importance began declining during the Third Dynasty when the capital was moved to Memphis.

Thinis was so important that in ancient Egyptian religious cosmology, as seen in the Book of the Dead, it played a role as a mythical place in heaven.

Despite never having been discovered, there is conclusive evidence of population concentrations in the Abydos-Thinis region. Based on this, experts estimate that the city most like predates the fourth millennium BCE.

There is also evidence that Thinis was the earliest royal burial-site in Egypt.

Knowing of their existence only forces us to question the number of ancient cities that have been lost to history, and remain hidden, either beneath the surface or beneath the ocean.

It will take a great archeological effort to fully uncover ancient Egypt’s history, and reveal its wonders to the modern world.