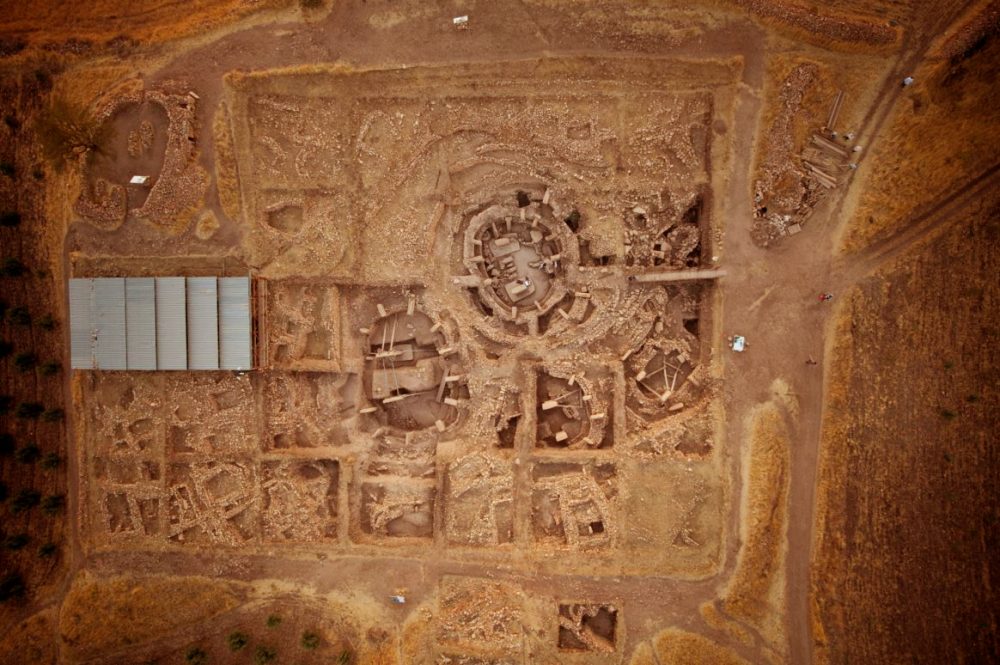 There is enough evidence to suggest that Göbekli Tepe was not just an ancient site, but the remnant of a long-lost ancient civilization absent from history.

In present-day Anatolia–Turkey–lay the remnants of the oldest megalithic site on Earth. Believed to have been constructed some 13,000 years ago by a mysterious people, the ancient site identified as Göbekli Tepe is shrouded in mystery for more reasons than one.

It is one of the most enigmatic sites on the planet, and it doesn’t fit anywhere within the historical timeline set forth by present historians. This is because there is nothing like it out there.

Göbekli Tepe is so old that it should not even exist. Experts maintain that the massive site–which has only been excavated around 5% to date–was built by an “uncivilized” group of people, most likely hunter-gatherers. But was it really? To find out, we must turn our history books to the year 1994 when German archaeologist Klaus Schmidt “discovered” the massive complex buried beneath the surface.

Although officially discovered and cataloged in 1994, the site was “found” by American archaeologists in the ’60s. Back then, however, not much importance was given to the site because experts thought that the sections of the site that were protruding from the surface were no more than tombstones dating back to the time of the Byzantine Empire. The site was eventually left unexplored until Schmidt came along some thirty years later.

Unlike his American colleagues, Schmidt knew that the site was far older than what archaeologists initially thought, upon seeing the stone fragments. The surface features of Göbekli Tepe led Schmidt to quickly deduce that this was a prehistoric site, and not medieval as previously thought. With each exploration, the importance of the site was revealed further.

Strangely, for hundreds of years, the site’s importance was unnoticed. The hill that makes up the site had been cultivated for generations and the local inhabitants had removed some of the rocks, piling them in heaps to clear the fields. This is a shame since many archaeological pieces of evidence have been destroyed during this process.

After decades of explorations and excavations, archaeologists say that around 5% of the site has been excavated. Although most of it remains underground, experts have categorized the ancient site as the oldest temple on the planet, while others suggest it may have been an astronomical observatory.

I beg to differ.

The complexity of the site, its massive size, and its intricate features tell a more fabulous story. One that experts have missed to this date.

Mainstream experts argue that it is impossible that 12,000 years ago, complex societies existed near the border between present-day Turkey and Syria. The mainstream narrative explains that civilization as we know it did not exist at this time in history. Göbekli Tepe’s existence is an obvious indicator that this is not so. The sheer size of the site tells us that hunter-gatherers were unlikely the site’s founders.

The world’s oldest megalithic site–the complex of Göbekli Tepe–has a secret to tell.

How likely is it that between 12,000 and 13,000 years ago, a small group of hunter-gatherers decided to erect a supermassive site in the foothills of the Taurus Mountains? Very unlikely if you carefully insect less than 5% of the site excavated to this date. The builders of the site–which I believe were an advanced society, part of a long-lost civilization missing from our history books–had the ability not only to quarry massive stones, the heaviest of which has been estimated at around 50 tons.

Not only did this civilization have the ability to quarry the stones, but they also possessed the means to transport the massive material to the site where the structures were raised. Schmidt himself has claimed that “the work of quarrying, transporting and erecting tons of heavy, monolithic, and almost universally well-prepared limestone pillars […] was not within the capability of a few people.”

Unorganized hunter-gatherers or groups of hunter-gatherers would not have needed to build such a site, nor would they have been motivated in the first place. If this were the case, why are we not seeing similar supermassive structures erected around the globe, built by “hunter-gatherers”?

Why? Because hunter-gatherers did not build it.

Göbekli Tepe predates the Egyptian pyramids by several thousand years. We know that the civilization that built the pyramids was a complex society, developed and skilled, backed by a flourishing economy and ample availability of raw materials. The ancient Egyptians used multi-ton stones to build the pyramids, and although how these amazing structures were built remains a profound mystery, we can propose several theories on how they made it possible.

Göbekli Tepe, however, is shrouded in mystery even further.

Several thousands of years before the ancient Egyptians, the mysterious society that erected Göbekli Tepe developed the technology to quarry, transport, and position supermassive stones.

Most of the stones used in the construction of the site weigh around 10 tons on average. Analysis of the site suggests there are a total of 20 circles within which lie hundreds of stone pillars. However, only four of these circles have been excavated to date.

It is nearly impossible to get an idea of the amount of labor necessary to build such a complex and massive site. Archaeologists estimate that it took more than 500 people to extract the stones ranging of between 10 and 20 tons (although some weigh more than 50) from local quarries, and move them between the quarries and the construction site.

Were hunter-gatherers really capable of organizing such a massive workforce some 13,000 years ago? And if so, what motivated them to do this? Some experts argue that slaves may have been used to complete its construction, but there is no evidence to support that theory to date.

Planning, engineering, and a sense of architecture

You do not build a site the size of Göbekli Tepee randomly. To build something of such proportions requires planning; it requires practice and a sense of architecture and engineering. The incredible size of Göbekli Tepe is evidence that its builders had knowledge–advanced knowledge–of planning, engineering, and a refined sense of architecture and art.

The site was not randomly built, but all of its pillars and circles follow a pattern that reveals the complexity of the site. The workmanship present at the site suggests that its builders were a society well versed in various sciences, including geometry and even perhaps mathematics.

These structures at Göbekli Tepe not only predate the invention of ceramics, metallurgy, writing, or the wheel but were erected before the so-called Neolithic Revolution. In other words, the construction of Göbekli Tepe implies an organization at a level of complexity not associated, until now, with pre-Neolithic societies.

This leads us to question whether ordinary hunter-gatherers, who did not possess knowledge of writing–and therefore planning–could have erected such a complex site.

The complexity of Göbekli Tepe was confirmed in a 2020 study that demonstrated that its builders had a profound knowledge of applied geometry. The study published in the Cambridge Archaeological Journal reveals that Göbekli Tepe was far more advanced than originally thought and that its construction required much more complex planning and resources than previous estimates.

As explained earlier, the planning required to construct Göbekli Tepe was unlike anything seen in that part of history.

Researchers have demonstrated that Göbekli Tepe’s circles were not built individually and randomly but were planned as a single unit and were constructed simultaneously.

One of the researchers of the study revealed that “the initial discovery of the site was a big surprise, and we are now showing that its construction was even more complex than we thought.”

Göbekli Tepe is a true geometric wonder, one that was not built by ordinary hunter-gatherers.

The Stonehenge and Gobekli Tepe connection

Perhaps one of the most fascinating tell-tale signs that back up the theory of Gobekli Tepe as a civilization are the results of a scientific paper published in the journal Nature Ecology & Evolution. The researchers offer conclusive evidence that the ancestors of the builders of Stonehenge originated from present-day Anatolia in Turkey, the region where Gobekli Tepe stands.

An extensive study of DNA from late-Stone Age Britons indicates that the ancestors of the people that built Stonehenge followed a long migratory route along the Mediterranean–starting in Turkey– seeding along the way knowledge of megalithic building. Furthermore, the researchers believe that the distant travelers from present-day Turkey likely were the ones who introduced agriculture and farming to the people of Britain thousands of years ago.

In addition to the massive stones weighing 10, 20, and even 50 tons, the variety of fauna described, from lions and wild boars to birds and insects make a single explanation problematic. However, the symbols at Göbekli Tepe attest to a society well versed in symbolism and art. A series of smaller stone artifacts, statues, and items raise more questions than answers. The mixture of artifacts found at Göbekli Tepe cannot be attributed to one period or another given its rich diversity.

Building a site of such complexity and size 13,000 years ago is mind-boggling, to say the least. It took a great effort to build the site and maintain it. Göbekli Tepe’s size suggests it was of great importance to the people that constructed it. So why was it buried around 8,000 BC? If it was built by hunter-gatherers as mainstream scholars suggest, wouldn’t these nomadic people just abandon it and move on?

Building such a site required a massive effort, but burying it in its entirety was an even greater achievement. This raises another important question; why was it buried? We are unable to answer this question today, but perhaps further excavations of the site will reveal more clues that will help us understand Göbekli Tepe’s downfall.

Göbekli Tepe; a central site with many others

Perhaps what most supports the theory that the builders of Göbekli Tepe were part of an ancient civilization is the existence of many other similar, albeit smaller sites. One such example is a site called Nevalı Çori. This site is particularly interesting because of the presence of a series of figurines that were fired at temperatures between 500 and 600 °C. It was here where archeologists also discovered the oldest domesticated Einkorn wheat.

Their existence provides conclusive evidence of the development of ceramic firing technology predating the advent of pottery.

The similarity between the monuments at Göbekli Tepe and those at Nevalı Çori undoubtedly suggests that the builders were part of the same “civilization.”

Strata at the site suggest human presence over 12,000 years ago.

Our limited understanding of Göbekli Tepe raises more questions for archaeologists than it offers answers. We have no idea how hunter-gatherers were able to build, increase and maintain this considerable complexity in pre-Neolithic social conditions.

What adds to the mystery is the fact that we are unable to “read” and accurately interpret the pictograms of the site, so we don’t know what the animal reliefs and other symbols meant to the people that erected the site.

I believe that the builders of Gobekloi Tepe were no ordinary hunter-gatherers but part of a complex society that has since been forgotten and lost in the annals of history.

There is conclusive evidence that Anatolia, as well as regions in present-day Syria, were home to complex societies during a time when mainstream experts tell us there were none.

Maybe it is time to re-analyze our origins and re-write our history books.