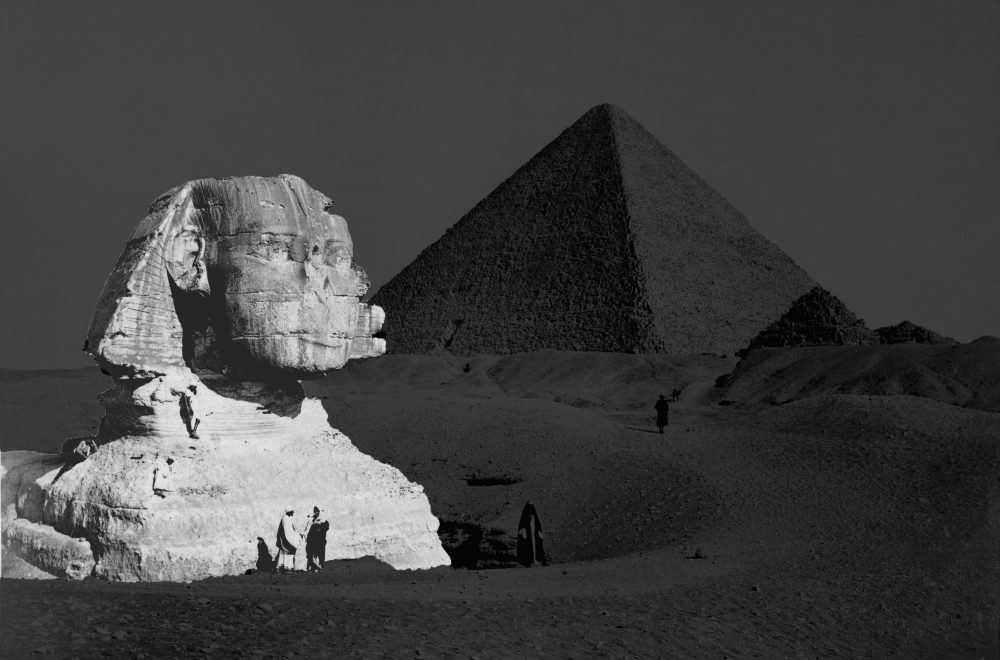 The Sphinx is so old that already to the ancient Egyptians it was an ancient statue. Its first restoration took place around 3,500 years ago. Some experts have claimed it is much older than the Fourth Dynasty of Egypt.

None of all the carved monuments on the planet are as enigmatic and mysterious as Giza’s Great Sphinx.

Cut from the Giza bedrock, the original shape of the Sphinx is thought to have been restored using several layers of stone blocks. At its current state, the massive monument measures 73 m (240 ft) long from paw to tail, 20 m (66 ft) high from the base to the top of the head, and 19 m (62 ft) wide at its rear haunches.

It is considered the oldest known monumental sculpture in Egypt and is one of the largest on the planet.

Despite its face throughout history, its origins remain shrouded in mystery, just as the massive structures located behind it.

Mainstream Egyptologists argue that the Great Sphinx is not older than the Great Pyramid of Giza and was probably commissioned during the Fourth Dynasty reign of Pharaoh Khafre, Khufu’s successor to the throne.

Although this is the mainstream view on the Sphinx, there is much conflicting evidence suggesting that the statute may be much older than what experts are willing to acknowledge.

Shaped in a lion’s body and a human’s face, experts can also not agree on who the Sphinx represents completely. The leading hypothesis among Egyptologists is that the Sphinx’s face was carved in the likeness of King Khafre.

Being the largest and oldest statue on Earth, the Sphinx is a rock star of the ancient world. However, it is not just famous because of its size and approximate age. The mysteries surrounding this unique statue are many and are precisely some of the reasons this statue has been dubbed a mystery carved in stone by different authors.

It is so mysterious that until this date, we are unable to decipher some of the most basic facts about it; we don’t know with confidence who built it, nor do we know its exact purpose.

Furthermore, we can’t identify the name the creators gave to the statue when it was completed.

In fact, the name by which call the statue today was given to it in classical antiquity, around 2,00 years after the Sphinx was supposedly carved.

The mystery surrounding the Sphinx is further fueled by the lack of inscriptions describing the statue. The Sphinx does not appear in any known inscriptions of the Old Kingdom, and no inscriptions have anywhere been found that can shed light on its construction or initial purpose.

We know that during the New Kingdom, the statue was referred to as the solar deity Hor-em-Akhet, which translates to Horus of the Horizon.

The Sphinx is referred to as such by Pharaoh Thutmose IV in the Dream Stele.

Despite the mysterious aura surrounding this ancient statue, Egyptologists maintain that it was built around 2,500 BC for Khafre. Unfortunately, no written evidence has been found that confirms this theory. Nonetheless, it is the leading one.

The only evidence mainstream Egyptologists have to support the Khafre Theory is a diorite statue of Khafre, which was discovered buried upside down along with other debris in the Valley Temple.

Egyptologists Salim Hassan best sums up the many problems surrounding the Sphinx’s origins in his book “The Sphinx: Its history in the light of Recent excavations”:

Egyptologist Selim Hassan excavated and studied the Sphinx in 1949.

In addition to the diorite statue of King Khafre, the Dream Stele of Thutmose IV is regarded as another piece of the puzzle that connects the Sphinx to Khafre.

However, it is important to bear in mind that the Dream Stele was erected much later by Thutmose IV (1401–1391 or 1397–1388 BC). When Egyptologists excavated the Dream Stele, its lines were heavily deteriorated, and its hieroglyphic inscription appeared incomplete. The stele referred to Khaf and not Khafre.

To push the theory of Khafre commissioning the Sphinx, Egyptologist Thomas Young “vandalized” the ancient relic by inserting the glyph a to complete Khafra’s name. The Sphinx was eventually buried again until 1925. When it was excavated again, the lines referring to Khafre were destroyed.

In the absence of conclusive evidence connecting Khafre to the Sphinx, it is irresponsible to claim the two are related.

Precisely this was the view maintained by several early Egyptologists and excavators of the Giza Pyramid Complex who maintained that the temples and the statue predate the Fourth Dynasty reign of not only Khafre but Khufu and Menkaure as well.

“The date of the Granite Temple [Valley Temple] has been so positively asserted to be earlier than the fourth dynasty that it may seem rash to dispute the point,” wrote Flinders Petrie in 1883, stating his opinion on the age of the Sphinx and its surrounding temples.

Petrie was not the only expert who has argued that the Sphinx predates the Fourth Dynasty. Before Petrie’s comments, in 1857, Auguste Mariette unearthed the Inventory Stele, which tells the story of how King Khufu came upon the Stele, which was already buried beneath the sand. Modern experts argue that the inventory stela is a purposeful fake created by local priests.

Gaston Maspero’s opinion was no different. The second director of the Egyptian Museum in Cairo surveyed the Sphinx in 1886 and concluded that since the Dream Stela mentioned Khafre in line 13, the King was most likely who excavated the Sphinx. In other words, the Sphinx must predate Khafre and his predecessors. In fact, Maspero suggested that the Sphinx was the oldest monument in the history of ancient Egypt.

“This marvelous object [the Great Sphinx] was in existence in the days of Khafre, or Khephren, and it is probable that it is a very great deal older than his reign and that it dates from the end of the archaic period of Egypt,” wrote Egyptologist E. A. Wallis Budge concurring with his colleagues.

Egyptologist Mark Lehner, who has extensively studied the Giza plateau, its Pyramids, and the Great Sphinx, is convinced that the ancient monument depicts the image of Khafre.

So does his colleague Ahmed Fakhry, who explained that “as it was first conceived, the Sphinx symbolized the King, and its face was carved in Khafre’s likeness. Dr. I.E.S. Edwards, an expert in ancient monuments, argues that although the ancient statue’s face has been heavily mutilated in the past, it still gives the impression that it represents Khafre.

However, like Graham Hancock and Robert Bauval explained in their book “The Message of the Sphinx,” without access to a time machine, none of us, not even the most distinguished of Egyptologists, are in a position to suggest or claim that the Sphinx is a portrait or likeness of Khafre.

The exact age of the Sphinx is perhaps its biggest mystery. We know that it is old enough that the ancient Egyptians already referred to the statue as an ancient masterpiece. How old exactly the Sphinx is, remains subject to debate. Given the lack of evidence and inscriptions referring to the Sphinx, it is nearly impossible to know how it depicts and when it was carved.

We know that the statue is so old that the first restoration of the statue took place around 3,500 years ago. At some point in history, the ancient Egyptians abandoned the Giza necropolis, and the Sphinx was eventually buried beneath the sand.

The first evidence of excavations can be traced back to around 1,400 BC, when Thutmose IV managed to excavate the statue after a great effort. His excavations revealed the statue’s front paws, which is precisely where he placed the Dream Stele.

The Sphinx would eventually be covered in sand again, and it remained so until Ramesses II the Great excavated the statue again between 1279–1213 BC).

Curiously, Mark Lehner had asserted in the past that there might have been far earlier restorations of the Sphinx during the Old Kingdom, between 2686–2184 BC. However, he eventually recanted his viewpoint.

10 Things You Should Know About Ancient Egypt’s Ankh 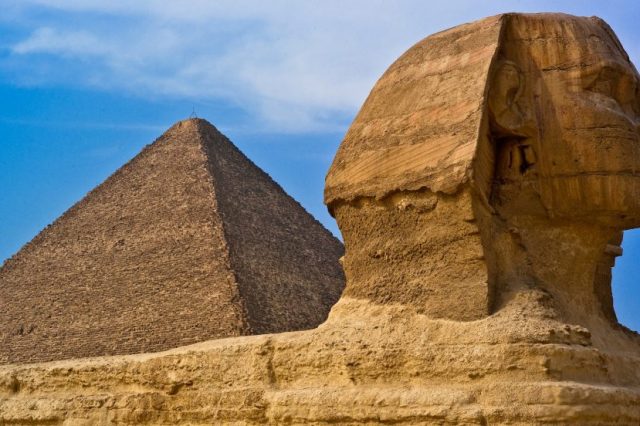