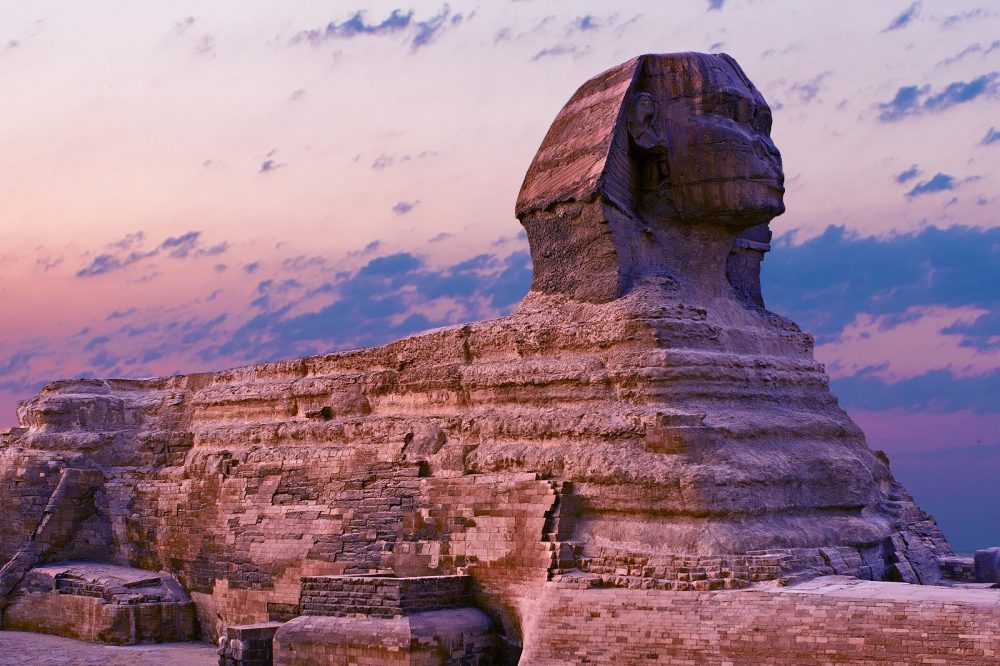 "...the very embodiment of antiquity and mystery itself," the best description of the Great Sphinx of Giza.

The Great Sphinx at Giza is, and remains, the most enigmatic and mysterious monolithic statue on the surface of the planet.

Around 225 BC, Philo of Byzantium penned down a paper called “On the Seven Wonders.” It is precisely this list that describes the seven wonders of the ancient world.

Of the seven ancient wonders of the world, only one remains standing to this date: The Great Pyramid at Giza, thought to have been commissioned by Pharaohs Khufu as his eternal resting place, competed some 4,500 years ago.

All other ancient wonders of the world have been lost to time: The Hanging Gardens of Babylon, the Statue of Zeus at Olympia, the Temple of Artemis, the Mausoleum at Halicarnassus, the Colossus of Rhodes and the Lighthouse of Alexandria. All of these ancient wonders have succumbed to history.

Only the Great Pyramid at Giza has managed to stand the test of time.

The Great Pyramid of Giza is perhaps the most amazing structure of all ancient wonders included in the list penned down by Philo of Byzantium. Khufu’s Great Pyramid has quite a list of honors. When it was finished, around 2560 BC, it remained the tallest structure on the surface of the planet for the next 3,800 years.

With a total weight of an estimated 6 million tons, scholars have calculated that the Great Pyramid at Giza was built with 5.5 million tons of limestone, 8,000 tons of granite (imported from Aswan), and 500,000 tons of mortar.  The gigantic stone pyramid was built using 2.3 million blocks of stone in a period that scholars estimate was no longer than 2 decades. To this date, scholars have not been able to explain how the pyramid was built 4,500 years ago.

And although many of us have been left amazed by the exterior of the Great Pyramid, its interior is equally fascinating and perhaps even more mysterious. This ancient pyramid happens to be the only one built having both ascending and descending passageway. Its interior pyramid is thought to maintain a constant temperature of around 20 degrees Celsius.

Although the pyramid has been studied for several centuries, it is still teaching us a lot about its origin. Back in 2017, researchers from the ScanPyramids project discovered, using muon radiography, that there are previously unknown chambers inside the pyramid that have remained a complete mystery until now.

In 2018, researchers found that the Great Pyramid of Giza can focus electromagnetic energy. The scientists explained that in the resonant state, the pyramid can concentrate electromagnetic energy in its internal chambers as well as under its base, where the third unfinished chamber is located.

So, for me, the Great Pyramid of Giza had to stand the test of time, given the complexity of the structure.

In addition to the above-mentioned seven ancient wonders, there are easily dozens of equally antique structures that can be included in the list. And in fact, since at least the nineteenth century, people have been suggesting new ancient wonders. It was former U.S. President Teddy Roosevelt that said California’s Burney Falls was the eighth wonder, a feature still noted on its website.

And while to many of us the Burney Wells are fascinating, they may not fit into the list of ancient wonders.

The ancient city of Teotihuacan can probably contend for a spot in a new ancient wonders of the world list.

Built by a mysterious civilization thousands of years ago, the ancient city of Teotihuacan is home to amazing temples, a massive avenue, and a pyramid complex, featuring some of the most advanced and gigantic pyramids the American Continent has ever seen. The city of Teotihuacan was already ancient when the Aztecs stumped upon it, overgrown by vegetation. The original name of the city remains an enigma.

But Teotihuacan is just one example of possible places that can be included as the eight ancient wonders of the world.

And if we are to look at various structures of antiquity and add a new member to the list of ancient wonders of the world, the Great Sphinx of Giza surely contends of that one spot.

The Great Sphinx id the very definition of an ancient, stone-made encyclopedia.

People in the 21st century are fascinated by it, and its history shrouded in mystery. But thousands of years ago in ancient Egypt people were equally stunned by it.

In fact, to the ancient Egyptians, the Sphinx was already ancient. Its exact purpose, meaning, and origin are a giant mystery that add to the beauty of what is considered the largest monolithic statue carved in antiquity. There is no other monolith statue as the Great Sphinx.

Egyptologist Miroslav Verner gives us a fascinating description of the Sphinx:

The statue is even more fascinating when you try and trace back its origins. There are no written records whatsoever that tell us anything about the Sphinx. WE don’t know when the statue was completed, although many argue it was finished during ancient Egypt’s Fourth Dynasty by Pharaoh Khafre. The truth is we don’t know. We can take an educated guess, but that’s about it.

Since there are no written records that mention it, we don’t know its original name.

According to James Allen an Egyptologist at Brown University, “The Egyptians didn’t write history, so we have no solid evidence for what its builders thought the Sphinx was. Certainly, something divine, presumably the image of a king, but beyond that is anyone’s guess.”

The Sphinx is mentioned in the New Kingdom and we know that it was revered as the solar deity Hor-em-akhet  and the pharaoh Thutmose IV (1401–1391 or 1397–1388 BC) specifically referred to it as such in his “Dream Stele.” In fact, it was precisely then when the first restorations of the Sphinx took place.

Whether or not the face of the Sphinx was its true face is debatable and we can’t know for sure. Its nose is missing. And although we don’t know who broke the nose of the statue, there is evidence that points towards how it was done. Archeologists have discovered that ‘someone’ hammered long rods or chisels into the nose, one specifically from the bridge and the other from under the nostril. Once in place, the implements were used to pry the nose off of the Sphinx. 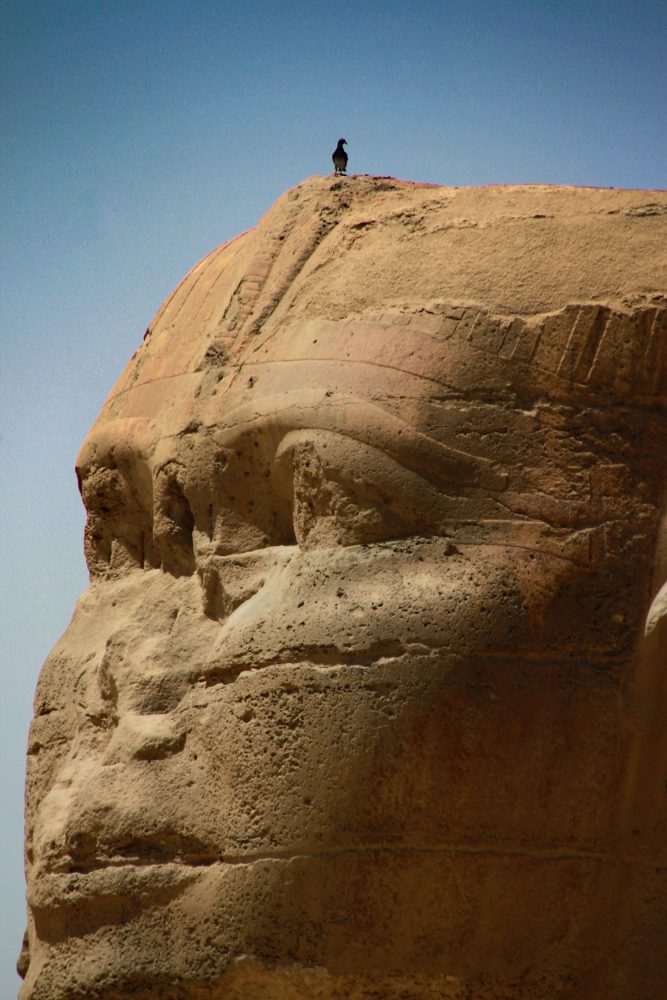 Accounts mentioning the Sphinx can be found in the writing of 12th-century scholar Abd al-Latif. He mentions that during the 12th century the statue was known as Abu Hol; “The Father of Terror.” Abd al-Latif describes the Sphinx’s face covered by a reddish tint and a red varnish as bright as if freshly painted. Abd al-Latif makes reference to the nose of the Sphinx, which means that it was still there in the 12th century. The missing nose of the Sphinx is mentioned when Arab historian al Maqrizi wrote about the statue which means the nose had to been destroyed before the early 15th century.

Since there are no written accounts dating back to the time of Khafre, or Khufu, we can’t know whether the face of the Sphinx may have once depicted either of the Pharaohs.

It is said that there are numerous ways to enter the Sphinx and that a mysterious world hides beneath the massive monument.

This, of course, is not acknowledged by mainstream scholars. Despite this, entrances leading ‘into’ the Sphinx have been well documented over the years. An entrance was discovered at the back of the monument by Johan Michael Vansleben in 1679 and explored in full by Egyptologist Auguste Mariette in 1853. This entrance is thought to have been sealed off in 1926 during restoration work.

A study from 1987 performed by a Japanese team from Waseda University (Tokyo), led by Sakuji Yoshimura reveals more mysteries hiding beneath the Sphinx.

In 1987 an electromagnetic survey of the Khufu Pyramid and the Great Sphinx took place the existence of a number of anomalies was reported.

The scientists had discovered entrances just south of the Sphinx as well as hollow parts in the ground where they spotted numerous cavities ranging from two to three meters in diameter. They also found a groove extending beneath the body of the Sphinx.

The Great Sphinx is an ancient monument already ancient to a civilization ancient to us. Its origin and purpose remain a profound mystery, and its impeccable carving/construction techniques have allowed the massive monolithic statue to stand the test of time, just as the massive towering pyramids the Great Sphinx seems to guard.