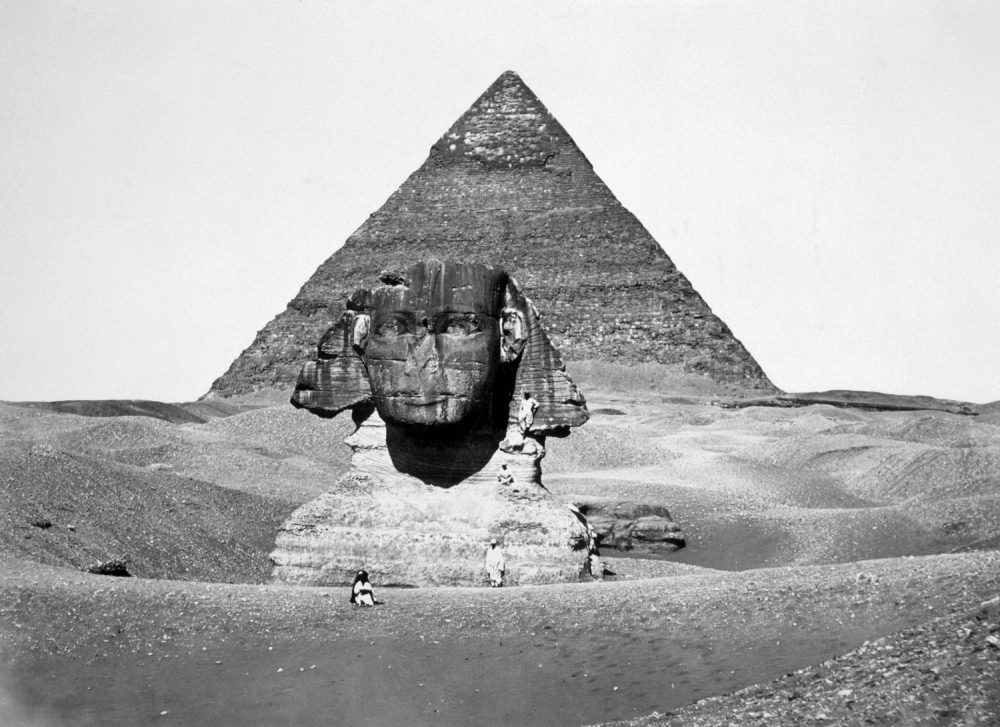 The Great Sphinx is so old that thousands of years ago, the ancient Egyptians already called it 'Ancient'.

Its exact age remains an enigma. Its purpose is shrouded in mystery. There isn’t a single historical document that tells us who erected/carved it. It is heavily damaged as well as eroded, but nonetheless, it is considered the largest carved, monolithic statue on the planet.

The Great Sphinx of Giza.

This massive monument standing guard at the footsteps of the Pyramids at Giza is the oldest, largest and most mysterious monuments on the surface of the planet.

Encompassed by myths, tales, and legends, the Great Sphinx of Giza is a monument unlike any other.

Considered by some a guardian of lost knowledge, there are those who argue the Sphinx indeed guards an ancient treasure located beneath it.

Despite the fact that we have always connected it to the ancient Egyptian civilization, and rightfully I might add, there many who argue the Sphinx predates the pyramids at Giza by hundreds if not thousands of years.

But why do some authors think it is older than the ancient Egyptian Pyramids?

Yup. Despite the fact that we call the great Sphinx–a Sphinx, the truth is that it isn’t really a Sphinx. Not in a traditional sense anyway.

If we turn to the ancient Greek mythology, for example, we’ll see that the Sphinx is made up of the body of a lion, the head of a woman and the wings of a giant bird.

The Great Sphinx of Giza doesn’t really fit in that depiction, as it lacks some of those traditional features.

In fact, the truth is that we don’t even know its true name. The ancient Egyptians initially identified the monument thanks to a text written on the Dream Stela, from around 1400 BCE, where the monument was referred to as a “statue of the very great Khepri.”

The story goes that once, Thutmose IV fell asleep next to the Sphinx which was by then already covered in sand.

Thutmose IV dreamt about the God Horem-Akhet-Khepri-Ra-Atum and how he approached him revealing that he was Thutmose’s father. In the dream, Thutmose IV was told to clear the sand around the statue, and once he did, he would rule over the land of Egypt.

Eventually, and after this event, the statue was dubbed Horem-Akhet, which means “Horus of the Horizon.”

The ancient Egyptians would go on and call the ‘Sphinx‘ by different name across the time including ‘balhib’ and ‘bilhaw.’

The fact that we DON’T know the Sphinx’s original name is strange. Even strange is the fact that there aren’t any written records that tell us anything about it being carved, built, or what it represents.

We don’t know who carved it

We truly don0’t. We do have theories and assumptions. And that’s weird. The Sphinx at Giza is one of the most amazing monuments throughout Egypt, and it is absurd to think about the fact that no one took credit for carving/building it.

One of the long-standing theories is that the Great Sphinx was carved during the rule of Khafre, which means that the monument may have been erected sometime around 2,500 BC.

Since Khafre is credited with the construction of the second-largest pyramid at Giza, as well as the valley and mortuary temples, scholars rushed to conclude that given its proximity to the Sphinx, then Kahfre way as well have commissioned the Sphinx.

However, there aren’t any documents that back up this theory and without experts being able to accurately date the structure, it is hard to say who it belonged to.

Some authors have even proposed that the Sphinx predates not only the reign of Khafre but the entire Giza plateau.

Water damage visible on the face, head, and body of the Sphinx has led some authors to suggest that the Great Sphinx existed in a time when the Giza Plateau was inundated by extensive rainfall in the region, which means that the Sphinx could date back to around 6,000 BC.

The Sphinx was already Ancient to the Ancient Egyptians

Did you know that the first ‘restoration’ of the Sphinx occurred around the 14th century BC? By the time Thutmose IV found the Sphinx, it was heavily deteriorated and buried in the sand.

Thutmose IV would ascend to the throne and take care of the ancient monument who by the time of the reign of Thutmose IV, was already ancient.

Around the 19th century, the statue was again covered in sand and it wasn’t until the 1920s when experts would eventually fully excavate the Sphinx, revealing its ancient body.

French Egyptologist Gaston Maspero surveyed the Sphinx in the 1920s and revealed that: “The Sphinx stela shows, in line thirteen, the cartouche of Khephren. I believe that to indicate an excavation carried out by that prince, following which, the almost certain proof that the Sphinx was already buried in sand by the time of Khafre and his predecessors.”