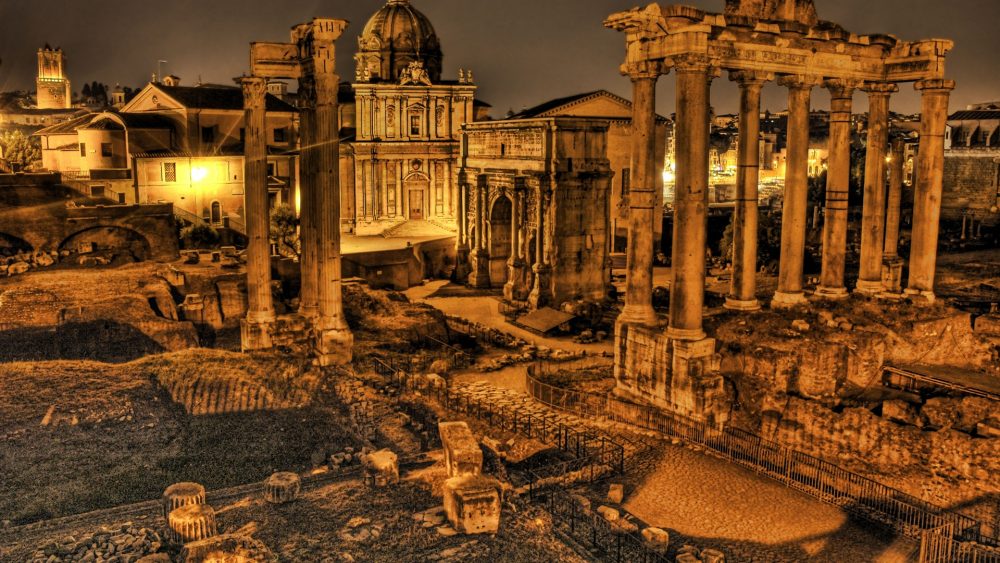 What caused the collapse of the Western Roman Empire? Corruption, economic decline, military spending, and more...

On the border between the 4th and 5th centuries, after almost 500 years of hegemony in the ancient world, the Western Roman Empire collapsed. Historians have repeatedly tried to systematize the reasons that led to its decline. All aspects of the problem have been considered – from mistakes in military strategy, through the unbearable tax burden, and even natural disasters – all this has been pointed out as factors that led to the decay of Rome.

Some believe that the Roman Empire finally ceased to exist in 476. Others argue that the empire was inherited directly from Byzantium and that the fall of the Byzantine Empire under the pressure of the Ottoman invasions in 1453 must be considered the end of its existence.

The controversy continues, but there are undeniable factors that are part of the path of decay and collapse of the Roman Empire. Here are eight important reasons for the demise of one of the most powerful empires in world history.

1. The invasion of barbarian tribes

The most obvious reason for Rome to become ruins and to depersonalize its former glory can be traced to the series of military defeats the legions of the empire suffered against external invaders. Rome fought the Germanic tribes for centuries, but after 300 years, the “barbarian” tribes, such as the Goths, invaded the empire uncontrollably.

The Romans withstood German pressure in the 4th century, but in 410, the armies led by the Visigothic king Alaric captured and plundered the heart of the empire, the Eternal City. For the next few decades, the empire lived under constant pressure from the barbarians until the year 455, when Rome was recaptured, this time by the Vandals.

Finally, in 476, the German leader Odoacer revolted and overthrew the last Roman emperor, Romulus Augustus. From that moment on, no one on the Italian peninsula bore the title of Emperor of Rome, so officially the year 476 is considered the year of the fall of the Western Roman Empire.

2. The problems in economic life and the lack of slaves within the Western Roman Empire

In addition to being attacked by invaders from the outside, Rome was torn from the inside because of the several financial crises it was experiencing. The incessant wars and overspending constantly drained the state treasury, and exorbitant taxes and uncontrollable inflation created a huge gap between the few rich and the sea of ​​the poor. In an attempt to avoid taxation, many of the noble Romans left the capital and settled in their provincial estates, where they created their own feudal “statesmen.”

At the same time, the empire was in dire need of labor. Rome’s economy depended entirely on the slaves who worked the land and practiced most of the crafts. The military power of the empire has the task of bringing fresh recruits home with its constant conquests.

However, when the conquests stopped – as early as the second century – the slaves needed for a functioning economy began to run out, and the treasures accumulated earlier from the war gradually melted away. Another blow to economic decline was the conquest of North Africa by the Vandals in the 5th century.

In addition to depriving the empire of important sources of goods, the vandals began to hinder trade in the Mediterranean region with their pirate raids. With its hard-working economy, declining trade, and persistent shortages of agricultural goods, the Roman Empire began to lose its role as the hegemon in Europe.

3. The rise of the Eastern Empire

The fate of the Western Roman Empire was partly predetermined at the end of the third century when Emperor Diocletian divided the empire into two – the Western part with its administrative center in Milan, and the east became Byzantium, later renamed Constantinople. In the short term, the division of the empire into two parts gave good results in governance, but over time the ties between its two parts became weaker.

East and West failed to work together and protect their possessions from outside invaders – disputes between the two sides over resources and military assistance were ongoing. As the chasm widened, the predominantly Greek-speaking eastern part of the empire began to get rich, and the Latin-speaking western part became poorer and plunged into economic crises.

More importantly, while accumulating money and power, the Eastern Empire inadvertently redirected the barbarian raids to the weaker western part. Emperors like Constantine, for example, secured the defense of Constantinople by turning it into an impregnable fortress, while the Eternal City, which for many living in the East was of only symbolic value, was left unprotected.

The Western political system finally collapsed in the 5th century, but in the east, the Byzantine Empire underwent various forms of government and thus outlived the West by 1,000 years before falling under the blows of the assertive Ottoman Empire.

During its heyday, the Roman Empire stretched from the Atlantic Ocean to the shores of the Euphrates in Asia Minor. But its vast territories became one of the reasons for its disintegration. The administrative management of such vast empires has always been a nightmare.

Even with their well-developed system of roads, the Romans were not able to communicate quickly enough and from there – to effectively manage their provinces. Rome was trying to maintain a sufficient number of legions to defend its borders and to calm the unrest in the provinces.

In the second century, Emperor Hadrian began building his famous shaft in Britain, which aimed to strengthen the borders of the empire and keep the invaders out of the Roman territory. But the cost of maintaining the empire’s military machine was rising, less money was being spent on technological innovation, and civilian infrastructure was becoming obsolete and crumbling due to careless maintenance.

5. Corruption in the upper echelons of power and political instability

If Rome’s territorial expansion was a nightmare for the administrators, the weak and idealess rule of the empire’s leaders only exacerbated the problem. Being the emperor of Rome had always been a risky business, but in the turbulent and turbulent II – III century, it literally became a death sentence.

Civil wars constantly rocked the empire, and in just 75 years, 20 men bore the title of emperor, succeeding each one after his predecessor was assassinated. The emperor’s bodyguards, the Praetorian Guard, killed and ascended new emperors at its own discretion, and once even put the emperor’s place up for auction to hand it over to the highest bidder.

The decay of the political system also penetrated the Roman Senate, because politicians failed to curb the oddities of imperial whims, as the political class was totally corrupt. As the situation worsened, more and more Roman citizens became increasingly distrustful of political leaders, and ordinary people began to lose the feeling that their ancestors had felt when they called themselves citizens of Rome.

6. The invasions of the Huns and the migration of barbarian tribes within the Western Roman Empire

The barbaric attacks on Rome were to some extent fueled by the Hun invasion of Europe in the late 4th century. When Eurasian warriors invaded northern Europe, they pushed the Germanic tribes to the borders of the empire. The Romans allowed the Visigoths to move into the territory of the empire south of the Danube, but the treatment of the Visigoths seeking protection and salvation within the empire was very cruel.

According to the historian Amian Marcellinus, Roman rulers forced starving Goths to sell their children into slavery to allow them to eat dog meat. With their brutal treatment, the Romans created a dangerous enemy inside their own country.

When the situation became intolerable, the Goths revolted and headed for the heart of the empire. The shocked Romans managed to reach a fragile truce with the barbarians, but their luck betrayed them in 410 when the Gothic leader Alaric captured Rome with a lightning attack.

When the Western Roman Empire was finally defeated, the Germanic tribes of the Vandals and Saxons could concentrate on other targets and begin a gradual invasion of Britain, Spain, and North Africa.

7. Christianity and the decline of traditional Roman values

The decline of the Roman Empire coincided with the spread and growth of Christianity, and no doubt the new religion had its influence on the collapse of the empire. With the Edict of Milan of 313, Christianity was legalized within Rome, and in 380 Emperor Theodosius, I elevated it to the rank of the only official religion.

These royal decrees put an end to centuries of persecution of Christ’s followers, but at the same time, undermining the foundations of traditional Roman moral values. Christianity not only pushed the polytheistic Roman pantheon of deities, in which the emperor was worshiped and equated with the gods but also shifted the focus of moral values ​​from the welfare of the community to the glorification of the individual.

At the same time, the highest dignitaries of the new Church of Christ were gaining more and more secular power and influence in the political affairs of the state.

Although the role of the new religion in the decline of Rome is obvious, still – compared to economic, military, and administrative factors, its contribution is not so significant. The changes brought about by religion rather affected the private lives of the Romans, changing and adjusting social relations in the vein of individualism.

8. The sunset of the Roman legions

For most of its history, Rome has been the undisputed military leader in the ancient world. But during the decline of the empire, the former power of his legions began to turn into memories of the good times of the past. The inability to recruit enough free citizens for their legions led emperors such as Diocletian and Constantine to attract mercenaries from outside the legions.

So many German Goths joined the legions that among Roman society the Latin word for “warrior” was gradually replaced by “barbarian.” And although the Germans were brave and skilled warriors, their loyalty to the empire was almost non-existent, and the leaders of the mercenaries dreamed of glory, which often led to their turning against the Romans themselves.

History proves it – many of the barbarians who plundered and destroyed Rome and brought the Western Roman Empire to its end actually grew up in the hierarchy of Roman legions.