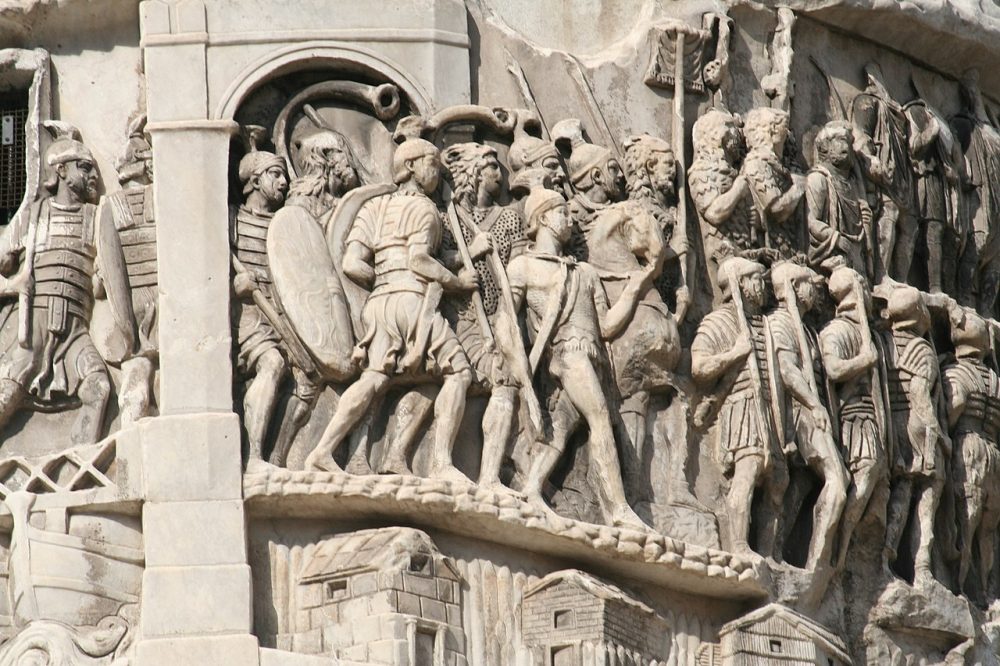 The great Roman army once included several hundred thousand soldiers, and the Roman legionaries were the most important part of it, to which we attribute the countless victories and overall success of the Roman conquests in the formation of the Roman Empire.

Much has been said about the weapons and tactics of the famous Roman legionaries. It is worth noting that they played a decisive role since the days of the Roman Republic until the decline of the Roman Empire in the 4th century AD.

However, beyond the exploits in majestic battles and the countless memorable victories, there was a more human and close to the ordinary citizen side of these men in the ranks of the legions. Without further ado, let’s take a look at 10 surprising things you probably didn’t know about Roman legionaries.

1. People from the villages were preferred as Roman legionaries

In general, all men between the ages of 17 and 46 were able to do military service. However, the most common age for admission was usually 20 years old.

Interestingly, each legionary had to declare his origo (Latin – origin) as urban. Despite these false claims, most of the legionaries had rural roots. As a result, urban origo documents often had to be falsified during the recruitment of soldiers, usually by the officials themselves.

This tendency to rewrite documents specifically for these people had a much more Roman style of logic behind them – as the peasants were considered tougher and with higher levels of endurance, they were also more appropriate.

2. Roman citizenship was not a requirement, but being born free was mandatory

Contrary to popular belief, the Roman legionaries were not always Roman citizens (although on paper it should have been). This circumvention of the law was a consequence of the civil wars that raged on Roman territory at the end of the Republic.

Julius Caesar, for example, built Legio V Alaudae from Gauls, who he later made official Roman subjects. Another example is Mark Antony. In the late 1st century BC, he did not have access to the main gathering points for soldiers in Italy, which is why he resorted to the desperate decision to fill his military ranks (of about 23 legions) with a local population from the eastern provinces of Syria and Egypt.

In summary, Roman citizenship was often not a requirement, but rather a status that the legionary received during his recruitment. However, it was obligatory for him to be born free, and it was impossible for slaves to have a military career. They could participate in the legion only in the form of servants and support units.

Fresh recruits who successfully enlisted as legionaries had to go through a training period of 4 months. The training included first marching for 29 km in 5 hours with normal steps and then 35 km for five hours at a brisk pace, the entire distance covered while carrying a backpack that weighed over 20 kg.

This weight was deliberately used to increase the legionnaire’s endurance and thus simulated the total weight of future armor that soldiers had to wear in full gear (only the lorica segmentata could exceed 10 kg). As expected, the slow ones were mercilessly beaten by the centurions and officers with heavy sticks.

After the difficult marching tours were mastered by the legionnaires, they were trained in combat maneuvers (including squares, wedges, and the famous testudo formation and signaling.

In the last stage, they trained with weapons. It is curious that the artificial swords and shields used in training were made of wood and wicker, but weighed twice as much as real weapons, in order to get the legionnaire used to the fatigue and exhaustion that would appear in a real battle.

In 13 BC. Augustus followed the policies of previous centuries and officially completed his military service of 16 years. It should be noted that even after these years the warrior was expected to join the vexillum veteranorum or detachment of veterans for another 4 years.

However, in 6 AD. the initial working time was increased to 20 years but was already accompanied by a praemia militare or bonus dissolution. This literally means a pension for veteran legionaries that had completed their years of service.

This was a fixed sum of 12,000 sesterces (or 3,000 denarii). And by the middle of the first century AD, the service was already 25 years old. Beyond the official period, protocols were often not followed during the war. The result was the re-recruitment of legionnaires who had long since completed their service, with some men fighting for their legion for 3-4 decades. Suffice it to say that such chaotic measures often led to riots.

As for the regular payment of Roman legionaries, in addition to the basic amount of praemia militare, the ordinary legionary received 900 sesterces per year (paid in 3 installments).

This salary was the same until at least 80 AD, despite the alleged inflation. The amount differed for the different ranks in the legion – non-commissioned officers and specialists received 1.5 or 2 times more than the basic salary of a regular legionnaire.

Moreover, this monetary value was only a starting point from which various expenses of the Roman legionaries were deducted, such as food, equipment, and even funeral dues. However, there were cases when the legionaries received less than they deserved, and sometimes even payment methods were used, such as giving useless plots of land instead of praemia militare.

5. Many Roman legionaries became soldiers because of the lure for loot and plunder

On the other hand, many potential recruits were still attracted to the idea of ​​joining the legion because of the plunder. Many charismatic commanders emphasized the apparent popularity of looting, especially when a war was being waged against stronger and wealthier neighbors.

According to Cicero, this may have been the main factor that motivated desperate soldiers under the command of Mark Antony, for example. Their popular practice also points to their propensity for looting – soldiers often stripped the corpses of their enemies as the first act of victory over them after a battle.

The Romans were also not above the “barbarism” often attributed to their enemies. For example, after the desecration of the dead, it was a Roman custom to turn numerous severed enemy hands into trophies. During wartime, enemy corpses and heads pierced on the blades of raised platforms began to be added to these above-ground trophies.

6. Brotherhood can be considered one of the main reasons behind the success of the Roman army

Beyond discipline and training, one of the key reasons for the success of the Roman legionaries was directly related to the sense of brotherhood in the centuria (composed of 80 men). At a lower level, the centuria was divided into ten contubernium which was the smallest unit in the Roman army and consisted of groups of 8 legionaries.

These divisions generally led to the camaraderie (strong bond) between the people in these small units, who had to fight, dine, and rest together for decades during their military careers. This sense of identification was often carried over into their morale in the form of a desire to defend their comrades-in-arms during a real battle.

The life of the Roman legionaries was not only associated with fame and triumph, as popular culture presents them but still, there were some progressive practices applied by the Romans in cases of bravery.

For example, if a soldier was seriously wounded and could not continue in his military service, he was given a missio causaria or medical release, which was equivalent to an honorary release or honesta missio. This also raised his social status, which became higher than that of ordinary citizens, and released the disbanded legionary from taxes and other civic obligations.

Of course, the chance of survival after a severe wound was very low in antiquity. Even after being treated by a professional medici (surgeon and his assistants) who were part of each legion. So, objectively speaking, missio causaria may not have been a common practice due to the high probability of death.

8. Cowardice in Roman legionaries was met with severe punishments

In the modern context, the term “decimation” refers to the complete destruction of habitat, population, and even the ecosystem. But in Roman times, under various generals, this was the name of a method of disciplinary punishment that was deliberately applied in the legions.

When this punishment was still in use, it was most likely known as decimatio. It was the brutal trial in which every 10th man in the cohort (approximately 480 people) was selected to be killed. The most shocking part is that these unfortunate people had to be stoned or beaten to death by the rest of their comrades-in-arms – a brutal practice called fustuarium.

This relentless punishment was usually used for Roman legionaries who showed disobedience, cowardice, conspirators, intended to kill a comrade, participated in espionage activities, deserters, or, as in several cases, pretended to be ill in order not to participate in upcoming military activities.

And in a typical Roman manner – the “democracy” of punishment consisted of the random selection of soldiers (on a lottery basis), regardless of their rank, reputation, or even whether he was involved in the crime or not. The other warriors were sometimes forced to sleep outside the main camp and were left on a barley diet that was more difficult to digest than their usual portions of wheat.

9. In addition to ordinary Roman legionaries, there were veterans, doctors, engineers, and slaves in the legions

Roman legionaries could be considered veterans only after completing their mandatory 16 years in the army. Even after such a long period of service in the 1st century AD, the soldier was not supposed to retire from the legion. Instead, the veteran was transferred to a special unit (vexillum veteranorum) for another 4 years. Usually this detachment consisted of about 500-600 men, and it had its own administrative unit with various officers.

This unit was still attached to the main legion, but could sometimes be sent separately into battle. An example of such a case is the garrison of veterans near the city of Tala, which was separated from /legio III Augusta in 20 AD. Not surprisingly, the veterans with their many years of experience were very successful against the attacks of the numidian forces.

In addition to the vexillum veteranorum, there were also slaves who could accompany the legion. Unlike the veterans, the slaves were commanded as part of a legion of 180 men to each cohort of 480 soldiers. In total, a legion (usually composed of 10 cohorts) could be followed by about 1,200 slaves. These men were trained for the special needs of war. During emergencies, they were even armed to protect the camp.

And last but not least, the soldiers who made the army truly self-sufficient were the immunes, a group of highly educated specialists in the ranks of each legion. From doctors and engineers to architects, these men were freed from the hard work of regular soldiers, while at the same time being better paid by them.

10. The shield was used almost as much as a weapon as for defense

The traditional shield of the Roman legionaries was called scutum. First, the standard scutum of the 1st century BC. was a shield with an oval shape and a weight of about 10 kg, then its shape changed to a curved rectangular board during the reign of Augustus. This change drastically reduced the weight of the shield to 7.5 kg. The shield was held with a horizontal grip with an upright hand.

As a matter of fact, the rectangular scutum with rough dimensions of 102 x 63 cm did a good job of protecting the body, but its greatest advantage was its potential for offensive. The legionnaires clashed with their opponents with the full weight of the shield, and its upper part was used to push and knock down the enemy.