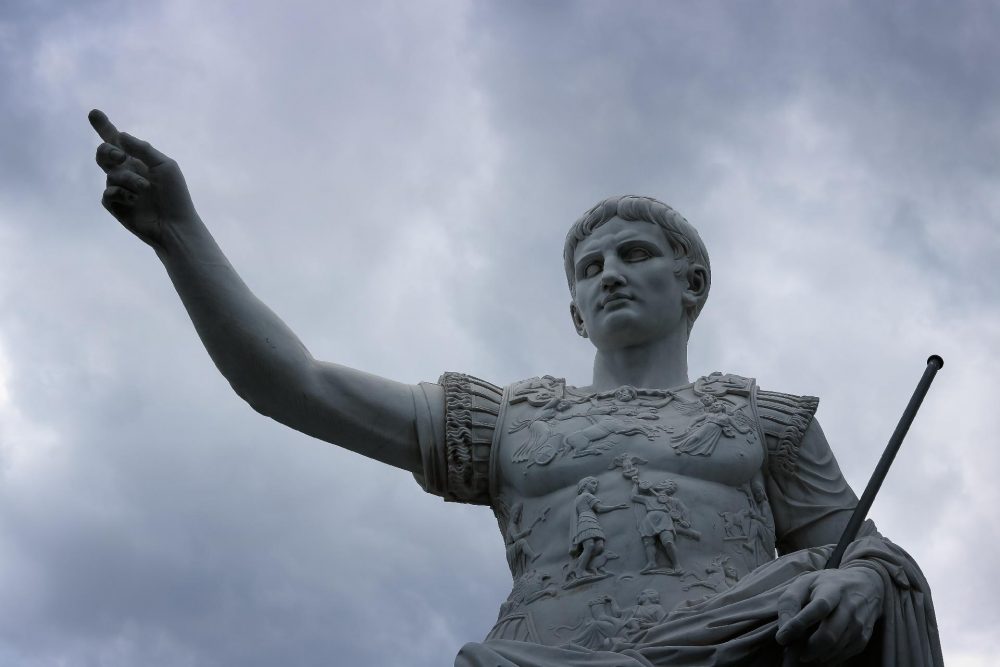 The Roman Empire went through many stages, mainly because of its diversity of emperors and their divergent political ideas.

The Roman Empire left a lasting impression both in Italy and throughout Europe, as far as it stretched, and today we see residual traces of its greatness in the hundreds of surviving architectural exploits from Europe to Asia. Although the empire lasted nearly 500 years, perhaps the most memorable element of it is the Roman Emperors, who made Rome a dominant power from Syria to the Atlantic.

Some of the names such as Octavian Augustus, Caligula, and Nero fit into modern times as frequently quoted figures from those times. However, the empire had many other rulers changing its appearance – for better or worse.

Octavian Augustus (63 BC – 14 AD) was the first Roman emperor. Born Gaius Octavius ​​of Turin, the ruler changed his name when he was proclaimed emperor in 27 BC. His coming to the throne was surrounded by bloodshed and troubled times.

When Caesar died, his nephew Augustus promised to avenge him by defeating Mark Anthony and Cleopatra during the Battle of Actium in 31 BC. When nobody else made claims for the throne, he took the title.

Despite being the first Roman emperor, he is remembered as one of the greatest. Rome was on the brink of collapse and it was Augustus who turned it into a powerful Empire and paved the way for the future emperors. Besides his reforms, he is well-known for his architectural achievements during his time.

The period of Pax Romana also began during the reign of Augustus. This was a 200-year period of peace and prosperity for Rome.

Inheriting Octavian Augustus, Tiberius Claudius Nero was the second Roman emperor, known simply as Tiberius. Although he was not the original heir, Tiberius was adopted by Augustus and thus became a worthy heir.

Tiberius has a controversial reputation. He led a mighty expansion as the Roman territories extended to Dalmatia, Pannonia, Raetia, and parts of Germany. However, historians from his time describe him as cruel and paranoid.

Tiberius deserves the epithets of a tyrant, especially in terms of power, as he executed several senators. Around the end of his reign and life, he had already completely neglected his duties and had retired to his villa in Capri.

If you need a good impression of a mad ruler, think of Caligula. He was the Roman emperor for only four years but his reign is well remembered. It began in 37 AD when Tiberius died. Caligula was widely accepted and loved in the beginning, and he was known as incredibly generous.

However, money and power took his consciousness and turned him into a mad and tyrannical ruler. He believed that the emperor’s rights were not enough and fought for more power. He was indulged in luxury and never again cared for his people. He even executed many of his family members in fear that they would seek his power.

Scholars often consider the probability that he was truly mad. His despotism continued for less than 5 years as he was assassinated by his own Praetorian Guard.

Emperor Nero is yet another ill-famed Roman Emperor. Like Caligula, Nero appeared to be a generous and kind ruler. In fact, Nero received the title when he was still a teenager, and his decisions depended on the instructions of his mother, Agrippina. His reign started successfully, mainly due to his mother’s wisdom.

The situation changed completely after Nero believed that his mother was planning to kill him, and as a result, he executed her. This decision completely changed the emperor who turned his attention to fame and luxury. Just like some of his predecessors, Nero became deeply paranoid about his life and executed his loved ones.

His terrible ruling peaked during the Great Fire of Rome on July 18, 64. Most sources claim that Nero started the fire in an effort to secure enough space to build his “Golden House” with a 30-meter statue of himself. Nero, of course, did not take the blame but placed it on the Christians. Although this version is unlikely, we assume that it is possible based on his madness and mania for greatness.

Titus Flavius ​​Vespasian inherited his power from Nero in complete chaos. As a matter of fact, no other emperor before Vespasian came from the lower caste in society. Step by step, he climbed the hierarchical ladder until he inherited the crown.

He is known as one of the good emperors of the empire, as he restored peace after the assassination of Nero. Vespasian initiated many architectural projects, one of which was the Colosseum, and gave monetary rewards to writers such as Pliny the Elder and Tacitus.

Emperor Trajan is considered by many as the greatest Roman emperor, including by his contemporaries. He was proclaimed “Optimus Princeps” by the Imperial Senate. If you are unfamiliar, this literally means the greatest ruler. He is known for the major expansion of the Imperial territories which reached the astonishing c 1.7 million square kilometers in Europe, Africa, and Asia with a population of almost 57 million people.

Trajan was another emperor with different origins. His birthplace was in Spain. He began his career as a soldier and it was then that he built a reputation as a beloved and respected general. In addition to his military achievements, Trajan built some of the most fascinating and iconic structures in Rome.

Publius Elius Trajan Hadrian gained an advantage because he inherited a powerful and rich empire from Trajan. As usual, the Senate wanted territorial expansions and conquests but Hadrian had other plans for his Empire. He preferred to unify it into one single advanced entity instead of adding more cultures and territories to the torn empire.

Besides the cultural achievements, you have certainly heard about some of his architectural successes such as Hadrian’s Wall which marked the borders of the Roman Empire in Britain. Greek architecture was Hadrian’s great passion, so many of his architectural projects show Greek elements. Hadrian commissioned the construction of dozens of magnificent temples and baths throughout the empire, the most famous of which was the Pantheon in Rome, which Hadrian restored after its burning.

Marcus Aurelius is known as a humane, moral, and educated ruler. He is a staunch follower of Stoicism, who absolutely condemns and does not accept war, but ironically he has to constantly lead military campaigns.

The time of this Roman Emperor is considered a golden age and a period of peak prosperity in the Roman Empire. They call him the emperor-philosopher. And after his death, he was officially deified.

Septimius Severus was the first North African Roman Emperor. Marcus Aurelius appointed him consul when he was really young which is where he began his career. He made a serious career in the army, most influenced by the fact that he ruled the important Roman province of Upper Pannonia (today it is part of the territories of Hungary, Austria, Croatia, Slovenia, Bosnia and Herzegovina, and Slovakia).

Septimius Severus is famous for being intelligent and determined. He worked on increasing his own powers by improving the conditions of the provincial elite. Of course, this was made against the will of the Roman elite that lost money as a result.

He is mostly famous for the expansion of the Roman army which he changed completely by offering higher wages to the soldiers and giving them the opportunity to marry and have a family.

Constantius is famous as a good-natured, modest, and а gentleman, and he was tolerant of Christians, probably under pressure from his mother. He was proclaimed the rightful leader by his father’s legions after his death in 306 AD. In general, this was an incredibly unstable period for the Roman empire due to the tetrarchical management and civil wars.

His father, Constantius was the Roman Emperor for a very short period but he was well respected and this worked in favor of Constantine, who was supported by the normal citizens and the army. As a result, he brought a certain degree of peace to the Empire.

His reforms began with the removal of Maxentius in 312 which led to his becoming Emperor of the Western Roman Empire. After several years of civil wars and political intrigue, he became the sole ruler of the empire by removing Licinius in 323.

His reforms continued once he was the sole ruler and he was able to centralize the administration of the damaged empire. However, Constantine is mostly known for the ideological revolution he began. He gave Christianity official rights that made it equal to all other religions within the Empire.