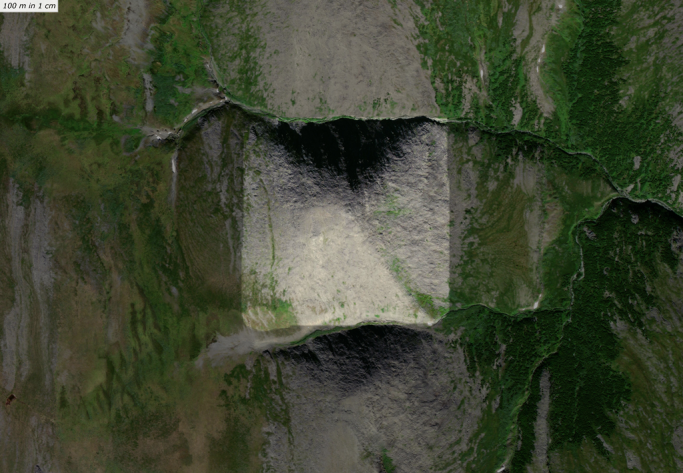 Extraordinary claims require extraordinary evidence. To me, this looks no more than a pyramid-shaped mountain, and there are plenty of those around the world.

According to reports, while going through aerial images of a region in the Ural mountains, a group of explorers claims they may have come across a massive pyramid, several times larger than the Great Pyramid of Giza.

But is it really a pyramid?

The Great Pyramid of Giza is the most famous out there. No matter who you ask, whenever a pyramid is mentioned, that of Khufu springs to mind. Yet, despite its fame, the Great Pyramid of Giza isn’t the oldest or the largest on Earth. The oldest pyramids are located in present-day Brazil, while the largest pyramid on Earth–in terms of volume–is located in present-day Mexico.

Now, claims of a massive pyramid discovery have flooded Russian media. According to Ekaterinburg online, a group of explores from “Wild North” found a huge pyramid in the Urals. The pyramid is said to be several times larger than the Egyptian pyramid of Khufu. The “pyramid” was discovered as the expedition went through satellite images looking for a landing spot for their helicopter when a pyramid-shaped structure caught their eye.

In terms of size, the alleged pyramid is a behemoth. Ekaterinburg online states it has a height of nearly 800 meters, and each side of the pyramid is around 1,000 meters in length.

Just as many other pyramids were aligned to the cardinal points, the researchers point out that the alleged structure in the Urals also seems to be precisely aligned.

As pointed out by Russian media, the pyramid is located in the Peoples-Itinsky Ridge’s territory in the Khanty-Mansi Autonomous Okrug – Ugra.

Evgeny Svitov, head of the Wild North Expedition Club, revealed in an interview with Ekaterinburg online that they came across the pyramid by chance.

“We were preparing a route and came across what seemed to be a pyramid. The structure stands on the edge of a meteorite impact crater. According to satellite data, the structure is eerily similar in shape to the Great Pyramid of Giza. Only its size is twice as large.

The pyramid’s height is estimated at 774 meters, the length of each of its faces is almost one kilometer, and its faces are clearly aligned to the cardinal points, the explorers have revealed.

The pyramid is difficult to reach. It takes either a helicopter trip to visit it or a 400-kilometer walk along a mountainous region.

But although the mountain may oddly resemble a pyramid, it isn’t the only one to do so, and there are plenty of similar “pyramids” across the world. But just because a mounting or hill resembles a pyramid, it doesn’t make it one.

Unfortunately, almost all such “sensational” discoveries are no more than a natural formation by which geological processes, water, and wind erosion cause certain mountains or hills to be shaped like a pyramid.

What we see here is most likely just another product of mother nature and our brain tricking us into seeing familiar shapes, which resembles the Great Pyramid of Giza.

As revealed by Russian media, in a few weeks, an expedition from the Russian Geographical Society is expected to visit the region where the alleged pyramid is located. They might very well take a look at the alleged discovery to confirm it is no more than a natural formation. However, they are not traveling there primarily to analyze the alleged discovery.