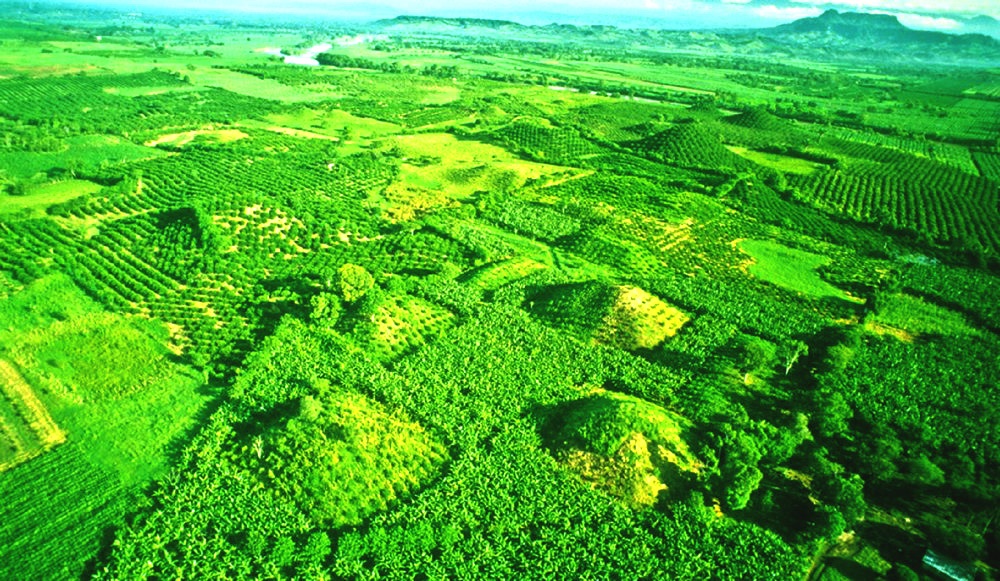 Home to as many as 150 pyramids, this ancient city is regarded as a missing-link in the history of the region.

The fact that there are pyramids scattered all across the globe isn’t surprising at all. That many of them are extremely similar in design but strange, and many of them stood the test of time, outlasting their original builders.

No matter what pyramids you look at, you will be left amazed by them. Whether its Africa, Europe, America, or Asia, pyramids are mind-boggling structures.

Pyramids are true ancient wonders and can be seen as the legacy left to us y our ancestors. But, as a message written in stone, many pyramids have still not revealed all of their secrets.

Others are just unknown.

This is the case in an ancient city called “El Pital.”

This ancient port city was built in present-day Mexico by a highly complex pyramid building culture that flourished near modern-day Veracruz.

North, Central, and South America hide many interesting things. Countless ancient civilizations flourished in different parts of history there, and they left a massive legacy for us to discover. Some clues are more evidence than others.

In Mexico, for example, there was an ancient civilization considered contemporaneous with the ancient May and the pyramid city of Teotihuacan, home to some of the most massive pyramids ever built in Mesoamerica.

This civilization settled in the lush river delta near Veracruz in the Gulf of Mexico. They built a community that would become a kind of ancient metropolis, a missing link city that played an essential role in the region’s development, becoming a major cultural and religious center that was home to at least 150 ancient pyramids.

El Pital was founded around 100 kilometers (60 miles) northwest of the modern-day city of Veracruz. Its position was strategically picked out: it was built in an area linked by two slow-moving rivers.

Although not connected directly to the ocean, the city’s location between rivers allowed it to become a conduit for seagoing trade with numerous pre-Colombian Indian cultures, some of which may have been located as far north as the upper Mississippi River.

In fact, according to archaeologists, the city was so important that it may have played a crucial role in introducing crops such as corn to cultures to the north.

This means that the city was most likely a center of trade in addition to being a developed cultural center.

Archeological excavations have revealed evidence of the city’s economic might. Crop fields discovered around El Pital were found to be advanced and made highly productive. Such was the development level that experts argue El Pital is home to some of the most significant terraforming projects of the time.

The city inhabitants are thought to have created massive canals that allowed them to drain wetlands and channel waters into fields that would have been unable to sustain crops otherwise.

Their highly productive crops may have made El Pital a significant terminus of a cultural corridor that expanded from Teotihuacan to the coast. Had El Pital not flourished when it did, cultural development in the region may have moved forward at a much slower pace.

Archeologists have calculated that more than 1,500 years ago, the city was home to more than 20,000 people.

This population density is unlike anything that proceeded or followed it until the end of the 20th century, indicating that “something special was going on technologically” at El Pital that allowed it to flourish the way it did.

Archeological measurements of the ancient city have revealed a true ancient metropolis of the time. The city’s core, its suburbs, and surrounding communities were found to exist in an area measuring approximately 24 by 12 miles.

We know just how vital El Pital was and the importance of its trade thanks to the gateways structure its inhabitants built along the rivers. The ancients strategically placed buildings that experts argue may have been used as either toll stations or control points for traffic along the river.

Since terraforming was obviously not an issue for the inhabitants of El Pital, it doesn’t come as a surprise to learn that they also built artificial islands on the rivers that allowed them to guard their territory more efficiently.

El Pital was made up of an extremely advanced society. Although they were contemporary with the Maya, the inhabitants of El Pital did not belong to the civilization from the south.

In fact, archeological excavations have so far failed to reveal their precise ethnicity. However, experts agree that they were most likely speakers of the Huastec language, or either people speaking the Nahua Language recognizable as being the language spoken by the civilization of Teotihuacan.

Definitely not built as tombs, el Pital is recognized by many as the Pyramid City of the Gulf of Mexico. Some of the pyramids at El Pital are truly massive, built at a towering height reaching up to 130 ft.

El Pital: What you need to know

Home to around 150 pyramids, the ancient city of El Pital has truly massive structures, some of which were built at a towering height of around 130 feet. In addition to its pyramids–which are thought to have served as religious centers–, the city was home to many other buildings but, most importantly, eight ball courts indicating the city was a major sports venue thousands of years ago.

It was one of the great metropolises of the region. Home to around 20,000 people, archaeologists agree that the development seen at El Pital is truly amazing. More importantly, this population density is unlike anything that proceeded or followed it until the end of the 20th century, indicating that “something special was going on technologically” at El Pital.

Terraforming was no issue for the mysterious culture of El Pital. Not only did they alter their landscape, allowing them to build massive farmlands, but they also terraformed parts of the rivers near the city, creating structures that allowed them to control traffic along the rivers, which means they controlled trade.

The inhabitants of El Pital were exceptionally well-sophisticated and developed a social and economic structure that was previously unseen at that time. In other words, they were far more advanced than any settlement around them.

Although not directly located on the coast, the city’s location near two rivers allowed them to become a dominant maritime trading power. Experts see the city of El Pital as a missing link in the development of the region.

The influence and power of El Pital were so great that experts had calculated the city controlled and administered more than 40 square miles of suburbs and farmlands. This might explain how they were able to build such a large structure and erect so many pyramids.

Strangely, just as with the disappearance of many other cultures from Mesoamerica, El Pital seemed to have been abandoned abruptly and under strange circumstances.