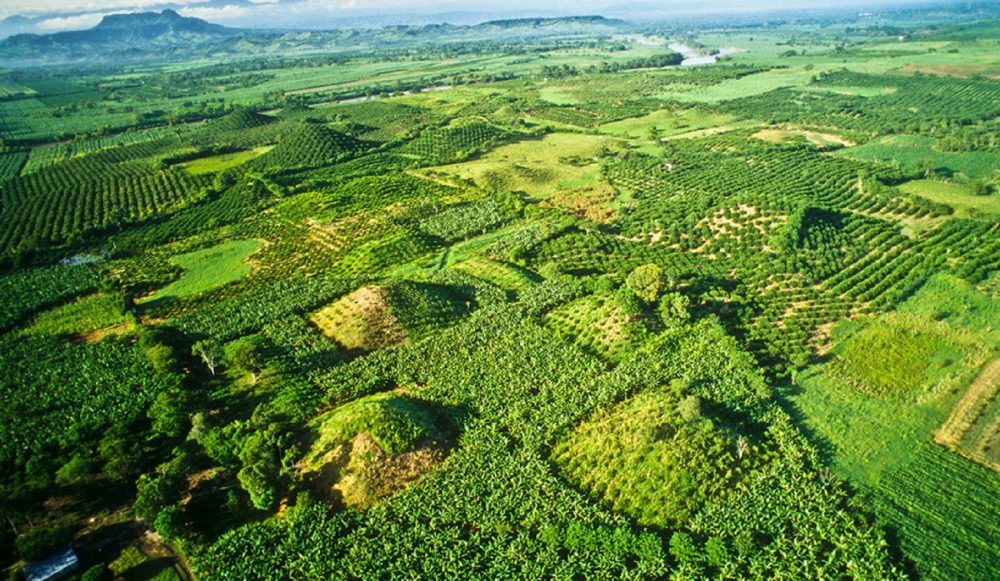 Thousands of years ago, an ancient civilization contemporary with the ancient Maya and pyramid-city of Teotihuacan settled down in what is present-day Veracruz, in the Gulf of Mexico. A kind of missing link, the ancient city played a crucial role in developing the region, eventually becoming a major cultural center that grew into a massive pyramid city.

In the lush river delta, the ancient people eventually built a community, settlement, and port city that flourished for hundreds of years.

Agriculture, commerce, and trade quickly developed, allowing the city to grow exponentially, becoming an important cultural center some 1,500 years ago.

The city had remained hidden from sight, and only locals knew of the existence of what some defined as “ancient ruins.”

However, it all changed in 1994 when archaeologists from the National Geographic Society announced that they had uncovered the ancient city. This developed port city is thought to have been North America’s largest coastal city around 1,500 years ago.

Dubbed El Pital due to its vicinity to the small town of the same name, archeological surveys revealed that this sophisticated ancient port city was also home to hundreds of pyramids.

Excavations eventually revealed as many as 150 earthen pyramids and countless buildings, some of which were more than 100 feet high.

The ancient city lies around 100 kilometers (60 miles) northwest of the modern-day city of Veracruz. Its discovery helped experts understand the impact the ancient city may have had in the trade, migration, and development of other pre-Colombian civilizations in the Gulf of Mexico.

The ancient city of El Pital is believed to have been contemporary with the ancient city of Teotihuacan, home to some of the most impressive Mesoamerican pyramids, and trade between the two most likely helped the region flourish in ancient times.

The main reason why El Pital is believed to have flourished and developed so rapidly is that, unlike other ancient inland cities, El Pital is thought to have had a precise function acting as a commerce center and food production district.

It indicates that the culture that inhabited the city and its ancient people were more sophisticated, with a well-developed social and economic structure previously unseen for that period.

The city of El Pital was massive for that period, and archeologists have calculated that more than 20,000 people most likely called the city home around 1,500 years ago. This population density is unlike anything that preceded it or followed it until the end of the 20th century, archeologists revealed. This suggests that “something special was going on technologically” at El Pital that allowed it to flourish the way it did.

However, El Pital’s influence was not only local.

Archaeologists have revealed that the ancient port city most likely became a conduit for seagoing trade with numerous pre-Colombian Indian cultures, some of which were located as far north as the upper Mississippi River. El Pital may also have played a crucial role in the introduction of crops such as corn to cultures from the north through trade.

Crop fields around el Pital were advanced and made highly productive by what experts consider some of the largest “terraforming” projects of the time, where the ancient inhabitants of El Pital dug extensive canals to drain wetlands and to channel water into fields that would have otherwise been unable to sustain crops.

According to archeological studies, many crops are thought to have come to the Mississippi valley through trade around the same period when the ancient port city of El Pital flourished, suggesting that the ancient settlement near present-day Veracruz may have played an important role.

Archeological surveys headed by S. Jeffrey, K. Wilkerson more than two decades ago suggest that El Pital was the largest urban center on the Gulf’s Coast in that period. But not only that, the researchers argue that El Pital may have been the significant terminus of a cultural corridor leading from Teotihuacan towards the coast. The archaeologists see El Pital as a kind of Missing Link in the history and development of the region.

Archaeological measurements of the city reveal that the core city, its suburbs, and surrounding communities stretch out in an area measuring 24 miles by 12 miles. Although not directly on the ocean, the ancient port city of El Pital is linked to it by two slow-moving rivers, the Tres Bocas and the Nautla, offering the city a perfect location for waterborne commerce along the Gulf Coast.

El Pital is thought to have controlled and administered more than 40 square miles of suburbs and farmland.

Evidence of El Pital being a major trading center comes from “gateway structures” discovered by Wilkerson along the rivers. These strategically placed buildings may have served as toll stations or control points for traffic along the river. Its inhabitants are also thought to have built artificial islands to guard the river.

El Pital is thought to have controlled coastal trade when the Mesoamerican culture was reaching its zenith.

Some of the most massive pyramids reach heights of around 130 feet. To build the ancient port city, the archaeologists say its inhabitants carried hundreds of thousands of tons worth of materials to build the city.

A total of eight ball courts discovered in the ancient city suggest that in addition to being a well-developed trade center, the city was also a kind of ancient sports center.

Surveys of the area have also revealed traces of human occupation in the region dating back to more than 3,000 years.

Although contemporary with early Maya cities, the inhabitants of El Pital were not Mayan, and no evidence has been uncovered that could reveal their ethnicity. However, evidence points that they were speakers of the Huastec language, or either people speaking the Nahua Language recognizable as being the language spoken by the civilization of Teotihuacan, which El Pital is also contemporary with.

In total, archeological surveys have revealed hundreds of ancient structures, massive pyramids, and hundreds of fragmented artifacts and potsherds at and around the city’s pyramids.

Among the most notorious discoveries are ceremonial artifacts, a sun-god plaque, weapons, and thousands of pottery fragments.

Why was it abandoned if El Pital was such a well-developed city, a center of commerce with vast farmlands?

According to archaeologists, the fall and eventual abandonment of the ancient city may have been connected to flooding and a megacycle of the weather phenomenon known as El Nino.