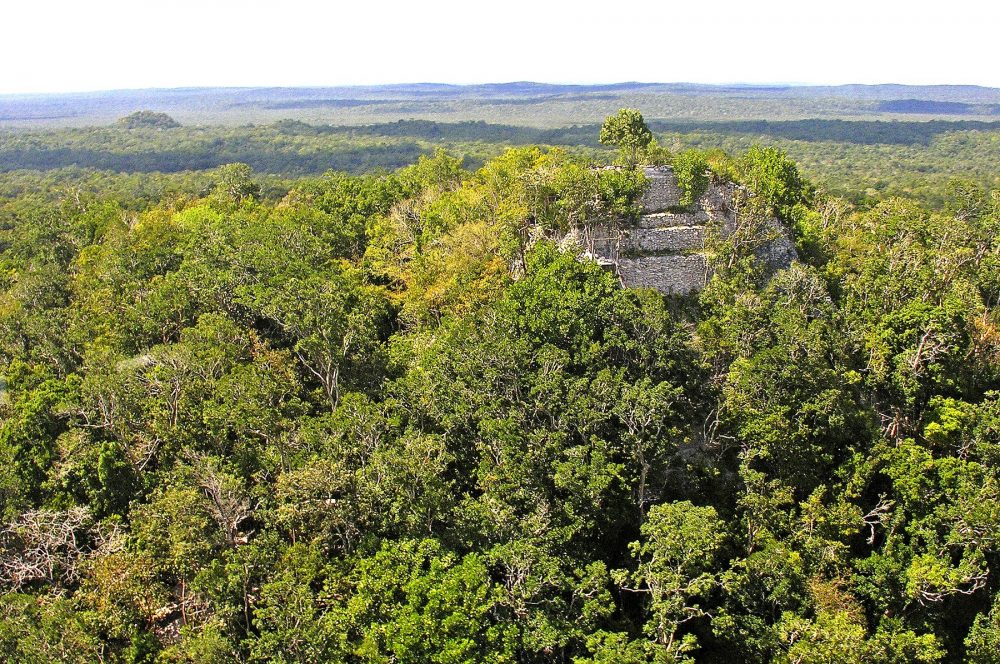 It is estimated that up to 15 Million man-days of labor would have been required to construct this massive pyramid.

One of the most awe-inspiring pyramids built in the ancient Maya world is the so-called Pyramid of La Danta.

Built thousands of years ago in present-day Guatemala are the remnants of a lost city called El Mirador. This ancient metropolis thrived from approximately the sixth through the third centuries BC, wholly abandoned around the ninth century.

During its heyday, the ancient Maya civilization built within Mirador a pyramid that would stand the test of time. But not just any pyramid. They built a massive superstructure (or better said, complex structures), rising a towering 72 meters into the air.

Today, one could pass by it and barely notice a behemoth structure even larger than the Great Pyramid of Giza in terms of volume. But, in fact, some of the largest most impressive pyramids were not built in Africa but in North, Central, and South America.

The ancient city was revealed in 1926 by Percy Madeira. A brief survey of La Danta was done by a Carnegie expedition in 1934, but it only lasted a few hours due to a lack of water in the area.

In 1962, archaeologist Ian Graham produced the first map of the site where the area identified as La Danta (1967) is known. Later from 1978 until 1983, the Mirador Archaeological Project, led by Ray Matheny and Bruce Dahlin, conducted the first intensive investigations.

During exploration, archeologists found, surprisingly, that a large number of constructions were not contemporary with the large Maya classic cities in the area but rather from centuries earlier, during the pre-classic period.

The city supported a large population, and evidence of revolutionary forms of agriculture is present all around the city. The ancients knew that the rain usually washes away the tropical soil that contained few nutrients and existed. This is why the ancient Maya civilization developed a system of highly productive forms of agriculture.

Around Mirador, the swamps were a solution the Maya turned towards. First, they imported mud from the swamps in the thousands of tons, creating artificial mud-covered terraces ready for agriculture. Then, they added lime to the soil, elevating the pH, making the land suitable for planting various crops, including corn, squash, beans, cacao, and cotton. That way, they managed to support a large civilization and exported many items to neighboring cities. It is estimated that the city of El Mirador was once home to as many as 200,000 people.

But not only are sophisticated forms of agriculture present at El Mirador. The city itself is home to many triadic structures (in total, around 35) consisting of massive platforms topped with a set of summit pyramids.

Three complexes of Mirador are the most famous of all the buildings: El Tigre with a height of 55 meters, Los Monos with 48 meters, and La Danta, the largest of them all measuring 72 meters tall.

But La Danta stands out from the rest. This massive Pyramid is one of the most voluminous structures in the Mayan world, dominating the Eastern Sector of El Mirador. The massive Pyramid is linked to the city’s central area by an extensive road measuring around one kilometer in length, 40 m wide, and 2 to 6 m high.

The La Danta Complex has been identified as a Triadic Acropolis consisting of three staggered leveling platforms.

It is recognized as an integral construction under a style and concept of the Late Preclassic period.

Several buildings of different hierarchies and functions were built on each leveling platform during the same Preclassic period, although there is evidence of modest residences from other periods.

A small city rather than a Pyramid

Archeological evidence indicates that most of this complex was built during one constructive time. However, remodeling and reconstruction were carried out during other periods. Because of its size and massiveness, La Danta looks more like a small city attached to El Mirador rather than a complex part of the city.

There is no doubt that planning and organizing a city like El Mirador required millions of man-days of labor and industrial quantities of raw material for walls, floors, construction fillings, pigmentations, etc.

The structure is so massive that experts have calculated that around 15 million man-days of labor were needed to complete the supermassive construction process.

Richard D. Hansen from the Idaho State University has calculated the volume and labor expended in the construction of La Danta, which represents approximately 2,816,016 cubic meters, unless there is a topographic anomaly, such as a natural hill inside.

Using calculations derived from current archeological expeditions, Hansen has identified 6,730,769 man-days of labor only in transporting the material ( mud and stone) for the landfill, that is, 1,000 workers working 18.44 years only in the landfill transport.

If we consider the cutting and transport of stone, the excavation of the mud, the transport of the mud and stones of the landfill, the preparation of construction cells by bricklayers, the cementing of pointed blocks, the preparation of stone from quarries, the cutting, transport, and preparation of wood for the quarries, the final application of stucco, engineering and architecture aspects, architectural art modeling, and logistics systems to maintain control of the work, it is estimated that up to 15,000,000 man-days of labor would have been required to construct this magnificent building.

“It took 12 men to carry each block—each one weighs about a thousand pounds…We’ve excavated nine quarries where the stones were cut, some 600 to 700 meters away.”— Richard D. Hansen.

Therefore, La Danta deserves to be recognized as one of the ancient world’s largest and most complex buildings.

It is noteworthy to emphasize that during the construction of this massive superstructure, the ancient Maya did not have pack animals such as horses, oxen, or mules. Furthermore, all of this was achieved with what experts say is primitive technology without using the wheel, which was unknown to the Maya.

This makes the La Danta Complex one of the most representative architectural works of the Preclassic Mayan world. Three factors make this construction an icon of Mayan culture: first, the stylistic and artistic majesty with which it was built. Second, its antiquity, and third, the dimensions it reached.

The pyramid complex of La Danta measures around 72 meters tall (236ft.) and consists of a total volume of more than 2,800,000 cubic meters, making it larger than the Great Pyramid of Giza in terms of volume, and earning it a place in the list of the largest pyramids ever constructed in the ancient world.

The construction of the La Danta Complex has been dated to the Late Preclassic period. It is part of the architectural concept known as the “triadic pattern or triadic pyramids” (Hansen 1990), consistent in constructing three buildings.

The so-called Triadic Pyramids were an architectural innovation that was developed by the Precalssic Maya civilization. These structures consist of a massive, primary building flanked by two smaller buildings, all connected through a single basal platform.

The most massive of such triadic pyramids is precisely the La Danta complex at El Mirador. In addition to its numerous supermassive structures, archeologists have discovered extraordinary arrangements between the architectural groups and main temples of El Mirador, most likely related to solar alignments. Archeological evidence from El Mirador tells us that the entire city was most likely planned from its foundation. The positioning of its temples, plazas, and roads was not random but entirely deliberate.

The triadic structure at El Mirador is so large that it covers an area six times as large as that covered by the largest Pyramid built in Tikal’s ancient city.

The second-largest triadic pyramid complex after El Mirador is the complex at El Tintal, a Maya archaeological site in Guatemala’s northern Petén region. The largest Pyramid at El Tintal is 44 meters, with a massive base measuring 105 by 78 meters (344 by 256 ft).

The Triadic pattern, which didn’t exist before 300 BC, is believed to represent a celestial hearth containing the fire of Creation. As explained by researchers, the Maya believed that the three main stars in Orion’s constellation were the hearthstones encircling the fire—a nebula called M42, which is visible just below Orion’s belt. Strangely, the Orion correlation theory postulates that the ancient Egyptians positioned the three main pyramids at the Giza plateau to mimic the pattern of the three main stars of Orion’s belt (Alnitak, Saiph, and Rigel) in a kind of as above so below the motif. The ancient Egyptians believed that one of their most prominent gods, Osiris, came down from Orion’s constellation.

One of the great unknowns of El Mirador refers to the reasons for the systematic destruction suffered by the Preclassic buildings, their masks and facades that were found mutilated and intentionally destroyed. Evidence of turbulent social changes? Wars? The reason remains unknown, but thanks to the massive size and quality of its buildings, the entire site has managed to stand the test of time.

The Pyramid Complex of La Danta represents a monumental effort involving humans, skilled workers, the ostentatious consumption of natural resources, and the tremendous work on a scale without antecedents in the ancient Mayan world.

The construction process of La Danta can be compared, in specific ways, to the first Pyramid complex of Ancient Egypt, the Step Pyramid at Saqqara, commissioned more than 4,700 years ago during the reign of Pharaoh Djoser.

There is no doubt that superstructures such as La Danta are evidence of a highly developed, organized, and complex society, pointing to the undeniable fact that thousands of years ago, cultures all across the planet were highly developed and sophisticated and able to erect some of the most awe-inspiring structure in the history of the human race.

The ancient Maya abandoned the entire city more than 2,000 years ago.