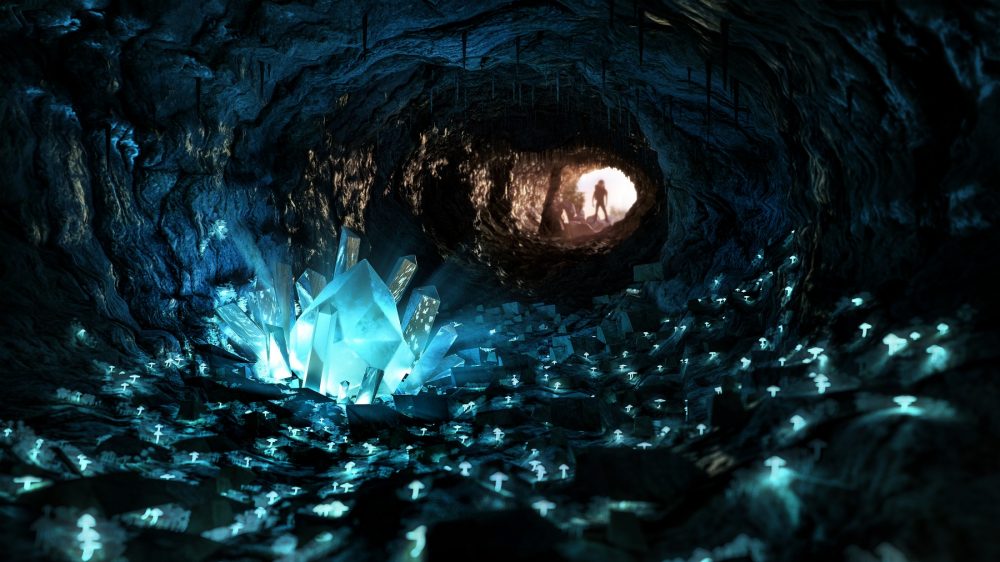 Crystals as heavy as a Whale and the size of a 4-story building exist beneath a desert in Mexico.

Remember those massive crystals mentioned by Jules Verne in his book Journey to the Center of the Earth? Well, it turns out they are real.

In present-day Mexico, beneath the Chihuahua desert, are selenite crystals as tall as a 4-story building and as heavy as a whale.

The exact origin of the massive crystals remains a mystery, as does the existence of ancient organisms embedded within the crystals, genetically distant from any known living microbes on Earth.

When Jules Verne wrote Journey to the Center of the Earth, he spoke of something that may seem unthinkable: a cave whose walls were covered with crystals of delusional sizes, much larger than a human being even larger than a building.

This was thought to have been no more than science fiction for years. After all, how could nature produce something like this? At that time, Verne’s idea was as fictitious as the world of prehistoric beasts that the characters described in his book would eventually encounter in their incredible Journey.

However, what Verne could not have imagined at the time, is that what he was describing in his best-selling book was, in fact, a reality that existed on the other side of the world. His cave of wonders exists in present-day Mexico.

The Naica Mine and Cave of Crystals

One hundred thirty-six years passed since the book was published until the brothers Juan and Pedro Sanchez discovered the so-called Cave of Crystals (Cueva de Los Cristales) in April 2000. They were drilling at the mine when they found, by accident, a wonder of nature. They found a gigantic collection of crystals inside the cave whose beauty and size words could not describe.

Through tunnels and crevices, they reached a place that almost seemed to have been produced by Verne’s imagination, and what was there exceeded any expectations. The crystals inside the cave were not the size of a person, and in fact, it was pointless comparing them to a person due to their size.

Some of the behemoth crystals were the size of a four-story building. Others had grown in width, thickening to four meters in diameter.

The largest crystal discovered to date measures 12 meters in length, 4 meters in diameter, and weighs more than 55 tons, similar to that of a Great Whale.

Within the cave, magic exists. It’s not just imagination. It is a reality that a few others than Verne could have dreamt of. The crystals gush from the cave’s walls in all directions, creating the forest of transparent geometries that Verne had described in his book more than 100 years ago.

The Naica Mine and its crystal cave are a true wonder of geology. The cave and its contents may sound like something that can exist only in some of the best science fiction books that have ever been written, but science and fiction are not far from science and reality.

Although the cave was found 20 years ago, it remains largely unexplored. As of 2015, the cave is o longer accessible since the mine had re-flooded, and the cavern filled once more with the water rich in minerals required for the crystals to grow.

The Cave of Crystals is a horseshoe-shaped cavity in limestone. Its floor is covered with perfectly faceted crystalline blocks. Gigantic crystal beams jut out from both the blocks as well as the floor. The crystals were found to deteriorate in the air. That’s why the Naica Project attempted to document the crystals before they deteriorated further visually. To conserve this wonder of nature, the cave has been re-flooded.

In addition to the massive cave of crystals, other, albeit much smaller, caverns were also discovered in 2000. So far, we know of the Cave of Crystals, the cave of Swords, the Queen’s Eye Cave, and Candles Cave. Furthermore, another chamber was found in a drilling project in 2009. The new cave, named Ice Palace, is 150 meters (490 ft) deep and is not flooded, but its crystal formations are much smaller, with small “cauliflower” formations and fine thread-like crystals.

The cave of swords is located at a depth of around 120, above the cave of crystals. Although it also features stunning crystals, these are much smaller than the massive examples found an additional 150 meters beneath the surface. Scientists say that the crystals inside the cave of swords are much smaller because, at this level, transition temperatures may have fallen much more rapidly, which caused the crystals to stop growing. The temperature was much hotter in the cave of crystals.

The closest thing to Alien life

In addition to the beautiful and massive crystals at Naica, scientists who ventured into the cave to study the crystals were left stumped after discovering organisms that aren’t related to anything in the known genetic databases.

Dr. Penelope Boston, a speleologist and geomicrobiologist specialist of extremophile organisms, sampled some of the crystals to see whether they contained any forms of ancient bacteria encapsulated within them.

While no DNA from ancient bacteria was extracted, it was reported in the 2017 meeting of the American Association for the Advancement of Science; researchers had discovered bacteria within inclusions embedded in some of the crystals in the cave.

The scientists also reported that by using sterile methods, they were able to extract and even reanimate the organisms, which turned out to be pretty alien to us; scientists concluded the organisms were not closely related to anything known in genetic databases, which games the odd organisms the closest thing to aliens we’ve found so far.

As revealed by researchers and based on the crystals’ growth rate, they (organisms) were probably isolated in the fluid pockets for between 10,000 and 50,000 years.