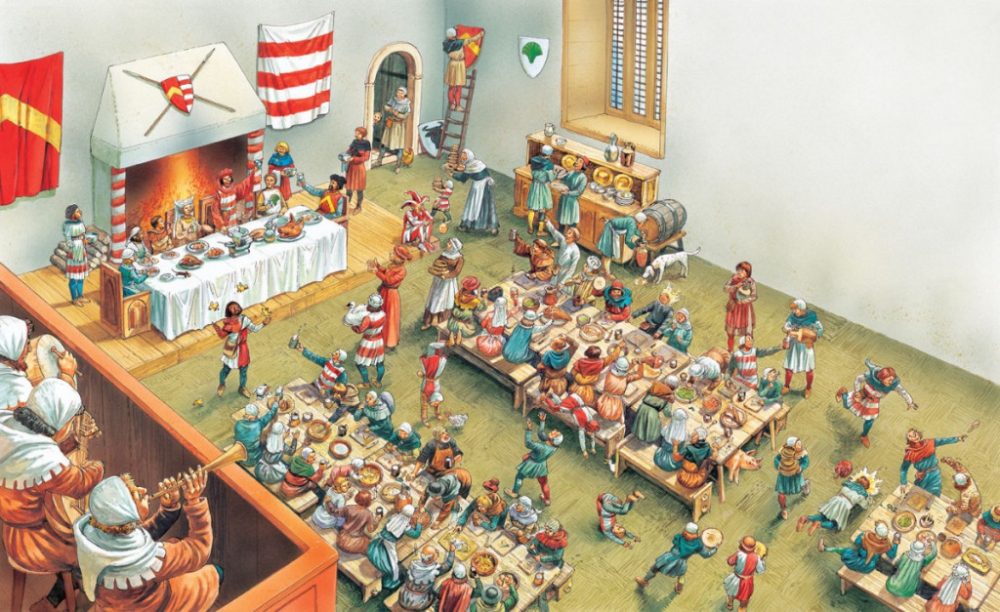 What kind of entertainment did people in the Middle Ages have? Do you think modern people would enjoy the same activities if technology did not exist?

For most people, the medieval era is associated either with the dark ages and the blazing fires of the Inquisition or with brave knights bowing before beautiful ladies to the sound of a harp. The truth, as always, is somewhere in between.

Although medieval people were very different from modern people in mentality, in many ways they are similar to us. For example, the Medieval ancestors of modern Europeans loved to have fun no less than we play computer games, watch movies or go to concerts.

Let’s try to find out what fun brightened up the gray monotonous everyday life of people in the Middle Ages.

Medieval knightly tournaments were not only a demonstration of strength, valor, and fighting skills but also a whole festival, accompanied by a magnificent fair and performances of wandering artists.

During the heyday of the Middle Ages, battles could be of two types:

The winner could choose the queen of the tournament according to their tastes. In the final, she solemnly presented him with the main prize in the form of gold coins, jewelry, and parts of weapons.

The peasants and townspeople in the Middle Ages often had other similar ways to have fun or participate. They were more fond of looking not at how brave knights knock each other out of the saddle with a spear, but at archery competitions and fistfights, where they themselves could take part.

In the late Middle Ages, tournaments began to be organized by wealthy nobles on the occasion of weddings, christenings, victories in war, and other significant dates. These were events for a narrow circle of relatives and friends, the entrance was closed to ordinary people.

Medieval Fun and Entertainment Despite the Prohibitions of the Church: Wandering Artists

The Church in the Middle Ages had a huge impact on the daily life of a person, imposing a huge number of restrictions. However, many of the strict prohibitions were bypassed by European residents without a twinge of conscience.

The most “privileged” class of itinerant performers were the troubadours or minstrels. They composed poems, songs, and performed their own works. The troubadours lived in the castles of the landowners, delighting with their art the refined tastes of noble ladies at feasts and receptions.

Jugglers, magicians, acrobats performed in front of the inhabitants of cities and villages. The performances of wandering puppeteers were especially loved by commoners.

With the help of puppets, biblical stories, folklore works, and legends were played out. The performances could be moralizing, tragic, but comedy scenes were in the greatest demand among the public, and the more indecent the content was, the more laughter and applause it aroused.

Carnivals and masquerades were held in most European cities during the week preceding Lent. At this time, the prim medieval society with a clear class hierarchy turned into a single seething human stream, where everyone dressed up in the most eccentric clothes, and in order to remain unrecognizable, with faces hidden under masks.

People in the costumes of animals, monks, jesters, men in women’s clothes, and women in men’s clothes roamed the streets of the city. Rulers, clergymen, human vices, church customs were ridiculed, and amusing knightly tournaments were held. All this was accompanied by constant feasts with an abundance of food and spirits, games of cards and dice, performances of jugglers and acrobats.

This bacchanalia was ruled by the elected king of jesters, and the culmination of the holiday was the election of the “donkey pope”, who was supposed to ride around the main square and the churchyard, sitting on the donkey backward in a priest’s costume.

Medieval people had fun just like us – with Music, Dancing, and Games

Everyone loved to listen to music performed by troubadours and jugglers. The most popular among the people were wind instruments (trumpet, flute, bagpipes), and the nobility preferred the exquisite sounds of the harp.

The simplest dance to complement the merry holidays in medieval castles was the Carola. It was performed to the tune of the same name using simple movements. Estampie was a more complex dance, with many cunning figures that require a sense of rhythm and performance skills from the performers.

For those who did not like to move to music, there were various options for sports and board games. The most popular games were those that vaguely resembled modern football. In rural areas, the “match” was held between the inhabitants of two neighboring villages, and the role of the ball was played by burlap or the skin of a bull, stuffed with sawdust, bran, and other rubbish.

Playing chess was an exquisite form of leisure in Medieval times and the rules for this fun and entertaining game were borrowed from the Arabs. However, the names of the figures were also changed to match European realities: the shah became king, the vizier became the queen, the rider turned into a knight (only a horse has survived to this day, without a rider).

Dice is a game of chance that does not require a long thought process. It is known that money, armor, castles, horses, peasants, wives, and other things needed in the household were lost in it. Players often played dishonestly, leading to fights, murders, and small neighborhood wars.

The Medieval times have passed, but entertainment and the need to have fun remained, maybe not in this way, but still, even with the modifications, they did not become forgotten. Masquerades are still held, and wandering artists became “not wandering”, but touring and recognizable around the world. Well, dancing and chess are generally out of competition – they are present in all our lives.

Tournaments of the Medieval Knights. (2019, November 15). Retrieved December 03, 2020, from https://www.thegreatcoursesdaily.com/tournaments-of-the-medieval-knights/