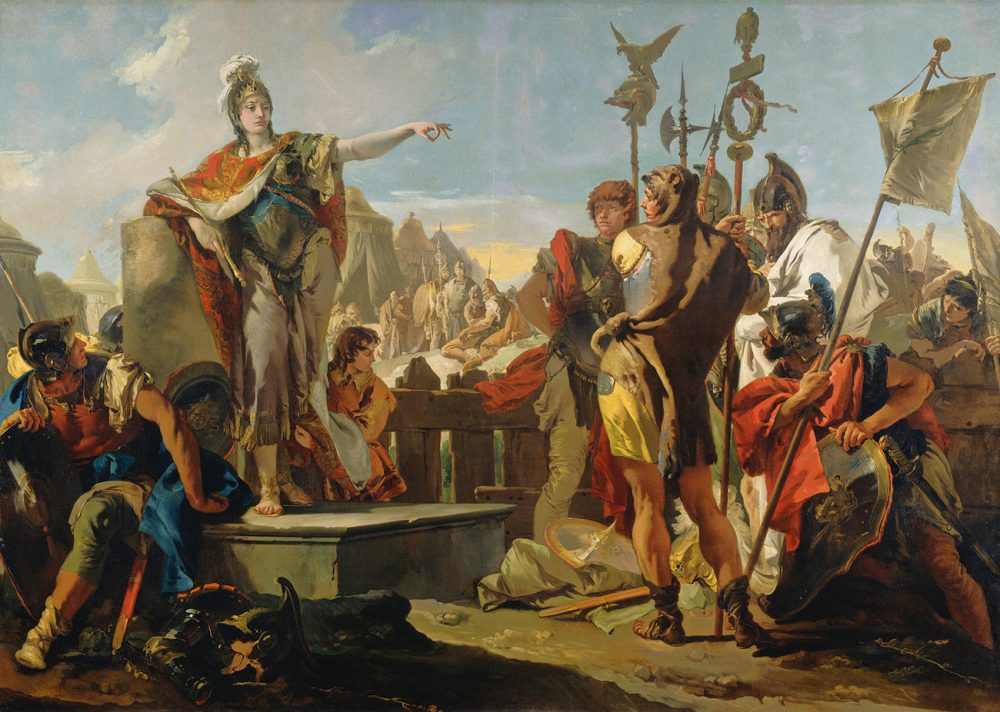 Queen Zenobia was such a monumental figure that she was once compared with Cleopatra.

From ancient times the image of a woman is associated with that of life because the woman is the one who gives the beginning of a new life. For millennia, women have been placed within certain limits to keep them away from power and the battlefield, which is not a place for “fragile” creatures.

Most of them complied with the boundaries set by society and the gods. Most, but not all. History knows more than one or two women who decided to prove that they have military qualities on an equal footing with men, whether in mastering combat techniques or in applying strategies in battle. One of them was Queen Zenobia of Palmyra.

The sands of the desert hold many treasures. In their arms is Ghadames, the pearl of Libya, the majestic Petra located in the “Valley of Moses” and Palmyra – the “bride of the desert”.

Today, the modern city of Palmyra is influenced by Aramaic tradition, Christian culture, and the Islamic religion. Tombs, temples of gods, and a wonderfully preserved ancient theater have attracted tourists for years to this beautiful oasis, as the ancient remains are under the protection of UNESCO.

More than 17 centuries ago, an emperor and his army swept Palmyra, enraged by the militia of a woman who boldly challenged the authority of one of the greatest empires in history, the Roman Empire. She had dark skin, black eyes, white teeth like pearls, and a harmonious voice. She was compared to the Queen of Sheba and Cleopatra but in a far more pious context.

The sources for the life of Queen Zenobia are not few. Along with archeological excavations, there are various ancient and medieval records, which are the work of Christian scribes, as well as Jewish and Arab chroniclers.

Depending on the goals pursued by the respective historian, the image of Zenobia differs, making her an interesting figure for study by modern scholars. By some, she is portrayed as a brave female who hunted from an early age and could overpower any man. By others, she is described as a cowardly hind who blamed her advisers for all her terrible actions and washes her hands with accusations.

In this tangle of hyperbolized tales, real facts, and historical events, the image of a far-sighted queen-regent Zenobia emerges, who not only doubled the borders of her country but also for a certain period of time turned Palmyra into a center of cultural life in the East, surrounded by an intellectual elite composed of scientists, philosophers, and artists.

Zenobia was born around 240-241 AD in a wealthy family. Her roots are controversial, because over the years, in order to legitimize her titles and power, the queen herself attributed kinship to various dynasties. She had Aramaic and Arabic roots but was also a descendant of the Seleucids.

Along the lines of this Macedonian dynasty, she is a distant relative of the Ptolemies, or so she claimed when she persuaded the Egyptians to recognize her as their legitimate ruler. According to certain accounts, she was probably the daughter of the famous Palmyra general Julius Aurelius Zenobius or Septimius Zabbai, as her full name is Septimia Zenobia. Her father probably died in battle and she was adopted by his brother.

She received a high education for her time. He spoke Greek, Syriac, and Egyptian, but also had knowledge of Latin. Her favorite hobby as a child is said to be hunting. Around 258, Zenobia became the second wife of Lucius Septimius Odaenathus, the Roman governor of Syria. He was the founder of the Palmyrian kingdom and became a vassal of the Roman Empire.

Septimius Odaenathus achieved this after defeating the Sassanids and repelling them beyond the Euphrates River. The Romans perceived his actions as fulfilling his duty as a vassal. In fact, Odaenathus was influenced by political changes in the East, and instead of consolidating his alliance with the Persians, he chose to prove his loyalty to the emperor.

Rome knew how to flatter and repay, and in 261/63 Odaenathus not only became ruler of Syria but also received titles as “king of kings” and “ruler of the whole East.”

When Odaenathus married Zenobia in the late 250s, he took not only a wife but also a life partner. According to sources, she is so pious that she gives herself to her husband only when she had to have children. She certainly endowed him with one son, Vaballathus, and perhaps a second, Hairan II, but his existence is in question.

Zenobia always accompanied her husband during his military campaigns. This happened in 267 when on his return from a campaign in the region of Anatolia, Odaenathus was killed, along with his eldest son by his first wife – Herodian.

His assassination was ordered, and sources give various theories about who is behind it. According to some, it was Zenobia herself, but that’s unlikely on the one hand, because of their close relationship, and on the other hand, because after his death she continued her husband’s policy.

Power in Palmyra went to the still young Vaballathus, the eldest son of Zenobia, and his mother became his regent. The inheritance took place without resistance, which means that their power was considered completely legitimate in the still young kingdom and that thanks to her participation in the campaigns, the queen had won the respect of her army.

However, there are reports that Zenobia was settling accounts with the people responsible for her husband’s death, and although it is not clear how, the names of some of the noble clans in Palmyra have disappeared from the chronicles.

From the very beginning, Zenobia made her first aggressive diplomatic move against the Roman emperor, as at her insistence, her son inherited not only power but also his father’s titles.

During the first years of her reign, the consort queen continued Odaenathus’s policy and her subjects began to consider her the “mistress of the East.” Her court consisted of eunuchs, writers, and philosophers, and she also chose one of Plato’s followers, Cassius Longinus, as her teacher and advisor.

Religious tolerance is believed to have prevailed during her reign, with Zenobia herself initially a follower of paganism, but later most likely converting to Judaism. Throughout her reign, her closest aides were two of Odaenathus’s trusted generals, Septimius Zabdas and Septimius Zabbai. It was they who led her troops to victories, which made her ruler not only of Syria but also of Asia Minor and Egypt.

While Zenobia’s power in the East was growing stronger, the Roman Empire was in crisis in the West. The queen’s reign coincided with the end of the rule of the Northern Dynasty which saw more than 20 military emperors in 50 years of rule. In other words, this was one of the hardest periods for the Roman Empire and Queen Zenobia took advantage.

In 269, the Roman army tried to repel the Goths and other barbarians to the north, the provinces were weakened, and the population was cut down by smallpox. Seeing that her suzerain was in trouble, Zenobia decided it was time to act.

She ordered General Zabdas to lead the Palmyrian troops to Egypt. In order not to attract the emperor’s attention unnecessarily, she did so under the pretext that the governor of this province was challenging the authority of Rome. The justification for her actions was not convincing enough, because when Roman garrisons were sent to Egypt, the soldiers of Zenobia counterattacked them and imposed her power over this province.

She won over the people of Alexandria by claiming that the city was rightfully hers because of her Egyptian roots. Papyri legitimizing her authority and coins with the image of her son and the Roman emperor immediately began to be written. The second is again in order to prove her vassality to Rome, which she did by erecting statues of the emperor and including him in official correspondence.

Gradually, however, Zenobia’s behavior changed. After Egypt, together with her two generals, she headed the army. Zenobia offered the cities of the Levant and Asia Minor either to voluntarily join the Palmyrian kingdom or to be conquered by arms.

Realizing the crisis within the Roman Empire, most choose the first option. Zenobia began to use the title “Augustus” for her son and “Augusta” for herself, which is equivalent to “emperor” and “empress”. In just two years, her possessions doubled. Her empire already stretched from present-day Iraq to Turkey and included the territories of Egypt, Jordan, Israel, Syria, Lebanon, and parts of Saudi Arabia. She even went further by cutting off grain supplies to Rome.

Queen Zenobia’s challenge to Rome and her downfall

Intoxicated by her new power, Queen Zenobia did not take into account one fact that would put an end to her rapid rise, and that was the rise of Aurelian as emperor of the Roman Empire. Unlike his predecessors, he was of a different breed.

He rose from legionary to emperor and was first a soldier and only then a politician. After he repulsed the Goths, his attention was drawn to the rapid growth of the Palmyrian kingdom and the bold challenge to the authority of Rome by Zenobia and her son. Of course, he had only one thing in mind – to restore these territories.

Aurelian’s tactic was to deceive her soldiers into retreat and then suddenly attack the enemy cavalry. Finally, Zenobia was pressed into Palmyra, where she prepared for a prolonged siege. At the same time, she began negotiations with the Persians, and when Aurelian’s troops approached the capital, she fled with her son to Persia. On the way, she was captured by Roman soldiers and taken to answer for her actions before Aurelian.

From that moment on, historical facts and legends intertwine to such an extent that it is difficult to establish the fate of Zenobia. She was certainly imprisoned in 272 and tried for treason in Emesa.

According to others, Zenobia and Vaballathus were chained in gold and presented to Roman citizens during a solemn procession marking Aurelian’s triumph and then executed.

There is a third version, which is considered the most reliable by historians. Aurelian’s pride would not allow him to flaunt his victory over a woman who would not bring him much fame. Most likely Zenobia was sent to Rome, where she married a senator and lived to a ripe old age in a beautiful mansion in the present-day city of Tivoli.

Whatever her future, in the following centuries she became a role model for other women rulers. Catherine the Great herself resembled her and emphasized the similarities between her court and the intellectual elite with which the Palmyra queen surrounds herself.

Although her sculpture has not been preserved, the image of Zenobia captures the imagination not only of ancient and medieval authors but also excited writers such as Boccaccio and Chaucer, composers such as Gioacchino Rossini, and directors such as Michelangelo Antonioni.

Thanks to her audacity and ingenuity, Zenobia remained in history as the woman who dared to challenge Rome and its imperial greatness. 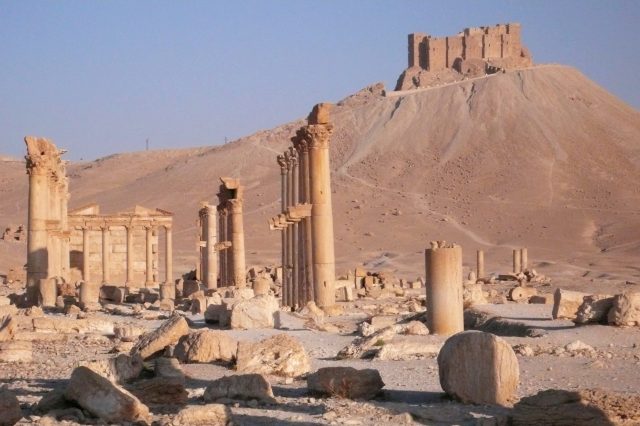