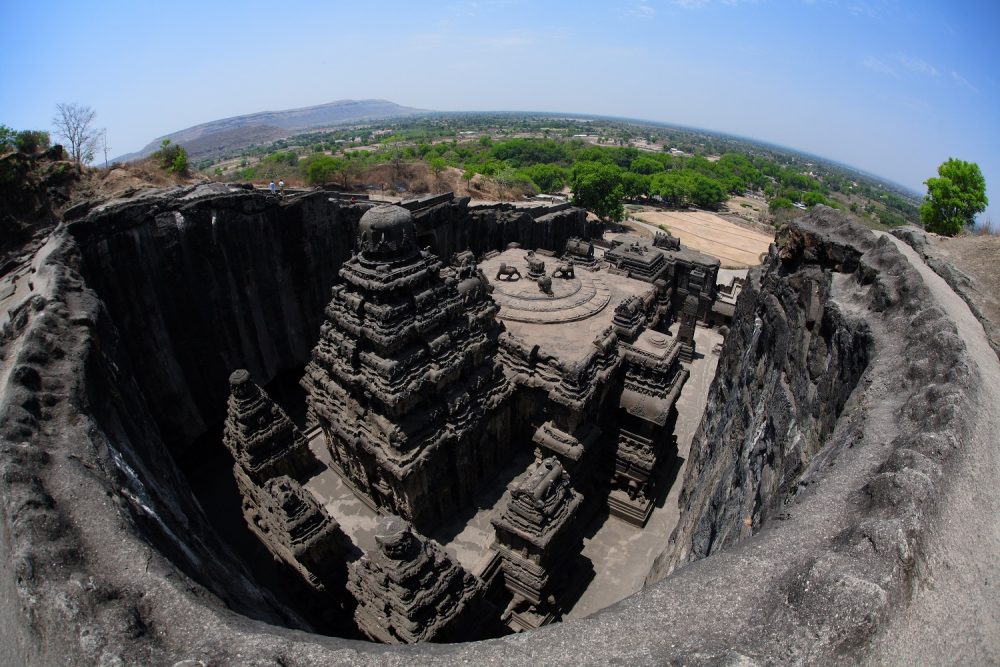 Scholars argue that the Kailasa Temple, dedicated to Lord Shiva, was built in 300 BC and that more than three million cubic feet of stone, weighing more than 200,000 tons were removed to build it.

Just as many other lands that are home to wonders and mysteries, India, too, is an epicenter of the inexplicable.

Countless ancient temples across the country were built thousands of years ago by ancient cultures that inhabited the lands since time immemorial.

One of India’s greatest enigmas is the Kailasa Temple.

Carved out of a mountain

Located in the city of Ellora, in the province of Maharashtra, the temple rises imposingly 30 meters into the air. The temple is 33 meters wide and 53 deep and is found to be perfectly aligned with the four cardinal points.

However, the most astonishing thing is that it is built from the bedrock.

Experts believe its builders made their way from the top to the bottom, eventually carving one of the most breathtaking temples ever built on the surface of the planet.

Scholars argue that the Kailasa Temple, dedicated to Lord Shiva, was built in 300 BC and that more than three million cubic feet of stone, weighing more than 200,000 tons, were removed to build it.

According to historians, the temple was built in 18 years using essential tools, such as hammers and chisels.

If this is true, it would mean that 5 tons of rock were removed daily, which some authors argue is nearly impossible even with the most advanced technology at our disposal today.

This, if true, raises the question of how the temple was created? What tools did the ancients make use of?

Where’s the massive amount of rock that was removed?

Furthermore, the Kailasa is just one of the many temples in Ellora.

In fact, this ancient site is home to more than one hundred caves, all of which were excavated in ancient times, without modern technology, from the basalt cliffs of the Charanandri Hills.

Only 34 of the 100 caves are currently open to the public.

While the temple was most likely built with a massive labor force, it is interesting to note that in India’s ancient, sacred books, such as the Mahabharata and the Ramayana, the texts speak of a powerful tool called Brahmastra.

According to the texts, the Brahmastra was a powerful weapon capable of vaporizing rocks.

Given the details written down in these sacred texts, some people have wondered whether the ancient Hindu culture built the Kailasa temple with the Brahmastra.

Were other “impossible” temples scattered around the world built in similar styles and similar tools?

But leaving myths, legends, and powerful weapon tools behind, experts believe the temple was built using a vertical excavation technique, meaning that the builders started at the top of the original boulder and made their way downwards, eventually carving one of the most fascinating ancient temples in the world.

But the exact tools used to achieve this remains a mystery.

So, how did they do it? Advanced technology? Or Human ingenuity? I’d pick the latter one, given the fact that many similar temples, equally mesmerizing and imposing, exist scattered across the Earth.