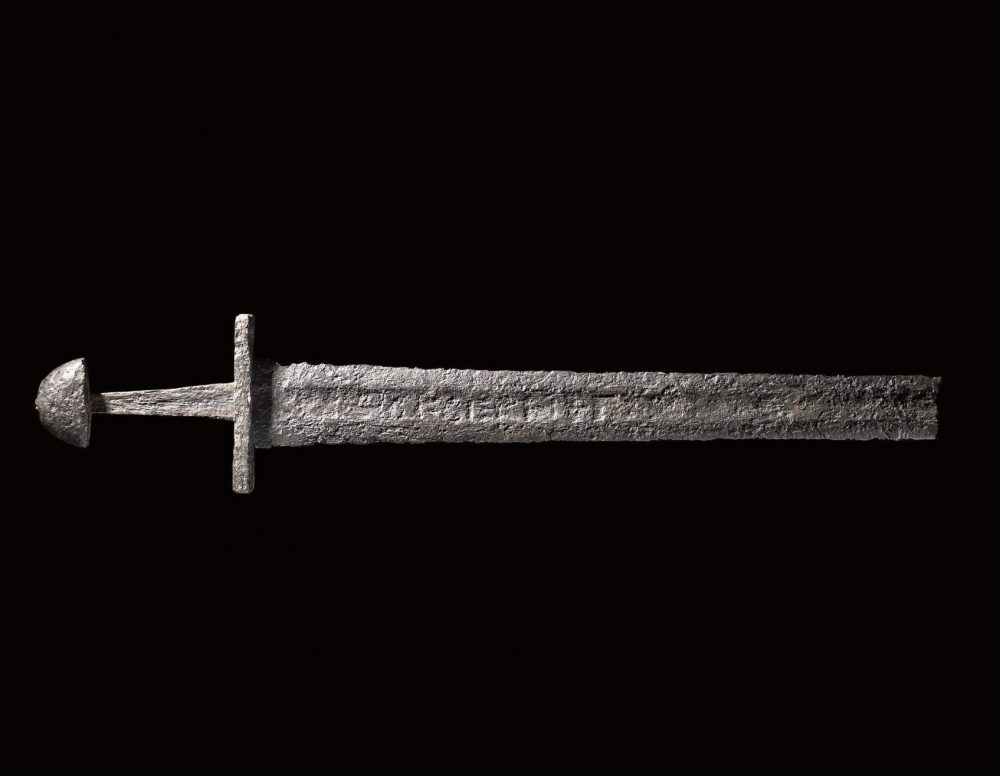 More than 170 Ulfberht swords have been found in various locations in Europe but the craftsmanship behind them remains an unsolved mystery.

In the Middle Ages, the Viking Ulfberht swords were probably considered something of an elite brand. However, their unattainable quality has remained a mystery for modern science.

We know of 170 such swords as of today and the curious thing about their discoveries is that they have been found scattered in different European locations. The metal from which they are made is so strong and pure that it is still a mystery to scientists how the masters of this era could achieve such quality.

All swords have one feature that puts them under the same “brand” – the Ulfberht stamp and two crosses. Many imitations and falsifications have also been found, on which some letters are omitted.

New research allows a deeper insight into the sources of the raw material from which the famous swords were forged. According to one theory, an Ulfberht sword could have been made using materials and technologies borrowed from the Middle East or Asia.

But recent research suggests that the deposit of the raw material was located near the region where the swords were found – in Central Europe. Nevertheless, blacksmiths in the Middle East also forged damask steel weapons of similar quality at the time of the creation of the Ulfberht swords (c. 800 – 1000).

The raw material for their production was a material known as Wootz steel, mined in Asia. Damascus steel and the so-called Ulfberht crucible steel, on the contrary, were high in carbon.

What Makes the Ulfberht Swords Unique?

Carbon can ruin a sword or make it superb. With the wrong ratio of carbon, the sword becomes too soft or fragile. But at the optimal ratio, carbon makes the blade stronger.

Ulfberht swords contain three times more carbon than the usual swords of that era. As a result, it is much stronger than other swords, with flexibility and light weight. In addition, they have virtually no impurities.

Until the discovery of the first Ulfberht sword, it was believed that the technology for removing impurities from metals to such an extent emerged only in the era of the Industrial Revolution. For this purpose, it is necessary to heat the iron to a temperature of 1600 ° C.

This shows that the creators of the Ulfberht swords were 800 years ahead of their time in terms of bladesmith technologies.

The famous contemporary blacksmith Richard Ferrer managed to make a sword equal in quality to Wolfbert, using equipment available in the Middle Ages. He says it was the most difficult task he has ever accomplished in his life. The blacksmith resorted to methods that were not known in the Middle Ages. Or so scientists used to think.

The Mystery of Damask Steel

The secret of making Damascus steel was revealed with the help of electron microscopes in modern laboratories. Damascus steel appeared around 300 BC, and the secret of its manufacture was irretrievably lost in the middle of the seventeenth century.

“Nanotechnology was used in the damascus steel – during the production of steel, various materials were added to it, causing chemical reactions at the quantum level”, explains archeology expert K. Chris Hirst to the website About Education.

Hearst cited a study by Peter Paufler of the University of Dresden, published in the journal Nature in 2006. Paufler and his team hypothesized that a similar reaction occurred as a result of combining raw materials from Asia (Wootz steel) with components added to the process of forging.

“Microstructures known as ‘carbon nanotubes’ have formed in the metal. They gave the blade strength”,explains Hearst.

“In the seventeenth century, the chemical composition of the raw material changed, they began to lack one or more minerals, probably because some of their deposits were depleted”, Hirst wrote.

According to recent research, however, Ulfberht swords had nothing to do with mines in India, Wootz steel, or Middle Eastern bladesmiths.

Where did the raw material come from?

Robert Lehmann, a chemist at the Institute of Inorganic Chemistry at the University of Hanover, told Süd Deutsche that the material from which the Ulfberht swords were made “was definitely not sourced from the East.”

He studied a sword discovered in 2012 in gravel from the Weser River in Lower Saxony in northwestern Germany. This sword contained a large amount of manganese. According to Lehmann, this is proof that the raw material was not mined in the East.

The wrist guard is made of iron with a high content of arsenic, which is a European feature. The handle is covered with a layer of tin and lead alloy.

During previous research, Lehmann mapped the isotopes of lead deposits in Germany. According to it, he determined that the lead was mined in the Taunus region, north of Frankfurt. It is unlikely that the raw material was extracted from another place, as this deposit has been known since Roman times.

This means that the sword is melted not far from the place of extraction of the raw material. So the researchers took another step closer to unraveling Ulfberht’s secret.

Where does the name of the Ulfberht Swords come from?

Now scientists have decided to pay more attention to its name. Is Ulfberht the name of the creator of the weapon or another person associated with the sword? In the Middle Ages, individual monasteries in the Taunus region were engaged in the production of weapons. But the name Ulfberht is not found in their annals.

Furthermore, it is impossible that a single man was behind every single Ulfberht sword as they were generally made in the span of 200 years between 800 and 1000 AD. Could it be that the swords were a Medieval brand?

Last but not least, the locations of the Ulfberht finds vary and the owners include Vikings, Franks, and members of other cultures. With so many swords found already, it is likely that this truly was some sort of a brand that only elite figures could afford. The craftsmanship behind these swords is unimaginable for this time period and it is highly likely that they were made only for the rich.