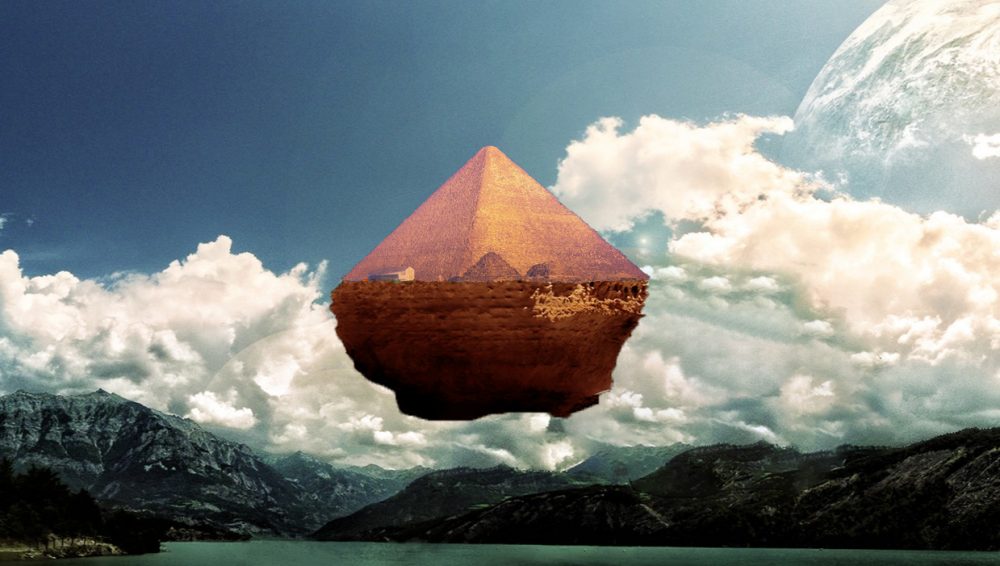 What kind of technology could have allowed the construction of the Temple of Jupiter in Baalbek Lebanon? This ancient structure is a jewel of ancient engineering. The foundation of the temple of Jupiter is home to three of the most massive stones ever quarried and moved by mankind. In total, the three stones weigh an average of 3,000 tons. Imagine transporting something of similar size in today's world. Would that be even possible?

The more we explore our planet, the more mysteries we encounter. Thousands of years ago, countless ancient civilizations called the planet their home. Across nearly all continents, sophisticated cultures arose that would go on to construct some of the most defying ancient monuments we’ve ever encountered.

From pyramids, walls, megalithic temples, and towers, thousands of years ago, different cultures erected challenging monuments using “limited” technology. Or at least, so we are told. But, what if for a second we consider the possibility that we don’t actually know everything about ancient humankind and that we don’t really know how some of the most sophisticated monuments in the history of humankind were built?

What if what we know is not nearly close to the truth?

No, this isn’t a conspiracy theory, but food for thought.

Stop for a moment and rid yourself of pre-imprinted thoughts, sold throughout the years through history books. Rid yourself of the notion that we know it all and that we are the most complex and advanced society to ever exist on the planet. Rid yourself of a mainstream ideology that many of us have firmly held onto as the ultimate fact.

What if great ancient civilizations such as the ancient Egyptians, the Olmec, the Inca, and Pre-Inca developed technologies that are long gone? What if mythology is more than a myth, and what if certain legends bear truth within them?

What if some of the greatest megalithic structures built on the planet’s surface by human hands were constructed with the help of a technology that is alien to us today? What if we can’t recognize the technology today and dismiss it without research?

Humankind was advanced already more than 12,000 years ago. When I say advanced, I don’t mean like today’s society is but in its own way. They were sophisticated, and self-taught, and understood and perceived the world very differently from how we perceive it today.

This state-of-mind may have played a role in the achievements of ancient civilizations.

Step aside from mainstream dogma and look at ancient sites such as the Pyramid of Giza, Tiahuanaco, Teotihuacan, Ollantaytambo, and Sacsayhuaman with different eyes. Take a look at Stonehenge, for example, and ask yourself, is there more to it than just stones? If your answer is yes, then you’ve just shown yourself how influenced you are by pre-imposed definitions of the ancient site.

To show you an example, a recent study has shown that Stonehenge was built so that its megalithic stones were capable of amplifying sound waves and containing them within the stone circle.

But many other sites are fascinating examples of the ingenuity and level of the advancement of our ancestors. Many of these sites defy our understanding of the capabilities of ancient man. I am always left awestruck when looking at images of the precisely-cut blocks of Puma Punku or the precise drill holes present at the site. Sacsayhuaman’s walls never cease to amaze me, and neither does the megalithic complex of Ollantaytambo.

Observing the care, precision, and elegance in which these sites were made, I can’t help to wonder whether these were built with ordinary, primitive tools—sticks and stones—or whether there was some “higher” technology involved in the process? Without forcing a conspiracy, I’d subscribe to the latter.

I firmly believe that many of the megalithic sites we study today have not revealed all their secrets.

Another fascinating example is Göbekli Tepe, an ancient site I really admire, not only because of what it signifies but because it is a perfect example of how advanced our ancestors were.

Göbekli Tepe, for one, was built around 12,000 years ago. By history books, we are told that during this time, the region where Göbekli Tepe was built was inhabited by hunter-gatherer societies.

The people that build Göbekli Tepe created something unprecedented; never before in history was such a massive site built, using such heavy stones.

Analysis of the site has revealed at least 200 massive stone pillars averaging in weight 10 tons. These blocks were transported from local quarries, the farthest of which was located some 1,000 meters.

What boggles the mind is not only the size—10 tons—of the pillars but the notion that these stones were transported and then raised into position, forming 16 stone circles totaling 200 pillars.

The curious part is that there are even heavier stones at Göbekli Tepe. Researchers have revealed the existence of pillars that weigh up to 20 tons, and one block weighs up to 50 tons. How did our ancestors pan on moving such heavy blocks 12,000 years ago?

It boggles the mind even to think that this site was created when history tells us that the region was home to nomads, chasing food around in the valley.

Göbekli Tepe is obvious evidence of the contrary and proves that 12,000 years ago, advanced societies already inhabited the Earth. These cultures, which may have been the remnants of an even older society, were well-taught in masonry, quarrying, geometry, and engineering.

But where did they get this knowledge from? Was it passed down from generation to generation? Was it written in stone? Were the records erased? Or was such a site really built by hunter-gatherers?

I am not trying to downplay our ancestors’ capabilities; I am merely trying to understand a wider picture while trying to keep an open mind.

Two main theories try to explain Göbekli Tepe; it was either a temple or an astronomical observatory, but given that we’ve only excavated around 5% of the site, we can’t possibly know, and it arrogant to even try explaining the site with so little information in our hands.

Sites such as Göbekli Tepe, Ollantaytambo, Sacsayhuaman, Puma Punku, Teotihuacan, and many others attest to the elevated technological degree of ancient civilizations. When I say “elevated,” I make no comparison to the technology we have today, nor do I imply they had trucks and cranes. But what I do believe is that they had uncovered the secrets of manipulating stone in a way we have not done so today.

What if among these secrets is the “technology” of levitation? Bear with me.

What kind of technology could have allowed the construction of the Temple of Jupiter in Baalbek, Lebanon? This ancient structure is a jewel of ancient engineering. The foundation of the temple of Jupiter is home to three of the most massive stones ever quarried and moved by humankind. In total, the three stones weigh an average of 3,000 tons.

Imagine transporting something of similar size in today’s world. Would that even be possible? Even if we were to break down the pieces into three 1,000-ton blocks, the mission to move them would be nearly impossible.

Although it may seem far-fetched and be no more than a myth, an ancient writer known as the Herodotus of the Arab world called Abul Hasan Ali Al-Masudi was of the idea that humankind knew the secrets of levitation.

Specifically, the Arab historian wrote how in ancient Egyptian times, when the first pyramids were being built, the ancient Egyptians possessed a kind of magical papyrus that was fitted around the stones, causing them to float after being hit by a metallic rod.

These stones would then move along a path paved with stones and fenced on each site by metallic poles. According to Al-Mas’udi, the stones could be moved for 50 meters, after which the process was repeated as many times as needed to get them to their desired location.

I am not saying that this was necessarily the case and that magic was used to move and build some of the most impressive monuments the world has ever seen, but what if?

I can’t help and wonder whether Al-Mas’udi was objective when he discussed the stones’ movement using “magical papyri,” or whether he, like many others, was simply left awestruck by the monuments and couldn’t explain their existence in other ways?

Even the Roman writer Pliny, who condemned Egypt’s pyramids as an “idle and foolish exhibit of royal wealth,” found much to wonder at when observing the pyramids.

Pliny wrote, “…the most curious question is how the stones were raised to so great a height…”

This is probably something that people have wondered about for millennia, perhaps even in ancient Egyptian times when kings such as Tutankhamun ruled over the land of pyramids and mummies.

Bruce Cathie wrote one book I find interesting, and it’s called “The Bridge to Infinity.”

In the book, Cathie explains how a priest in monasteries high in the Tibetan Himalayas had achieved and mastered levitation feats. Although Cathie’s wiring may seem controversial, I find the following quote from his book exceptional;

One day his friend took him to a place in the neighborhood of the monastery and showed him a sloping meadow which was surrounded in the north-west by high cliffs. In one of the rock walls, at a height of about 250 meters was a big hole which looked like the entrance to a cave. In front of this hole, there was a platform on which the monks were building a rock wall. The only access to this platform was from the top of the cliff and the monks lowered themselves down with the help of ropes.

In the middle of the meadow, about 250 meters from the cliff, was a polished slab of rock with a bowl-like cavity in the center. The bowl had a diameter of one meter and a depth of 15 centimeters. A block of stone was maneuvered into this cavity by Yak oxen. The block was one meter wide and one and one-half meters long. Then 19 musical instruments were set in an arc of 90 degrees at a distance of 63 meters from the stone slab. The radius of 63 meters was measured out accurately. The musical instruments consisted of 13 drums and six trumpets. (Ragdons).

Behind each instrument was a row of monks. When the stone was in position the monk behind the small drum gave a signal to start the concert. The small drum had a very sharp sound and could be heard even with the other instruments making a terrible din. All the monks were singing and chanting a prayer, slowly increasing the tempo of this unbelievable noise. During the first four minutes, nothing happened, then as the speed of the drumming, and the noise increased, the big stone block started to rock and sway, and suddenly it took off into the air with an increasing speed in the direction of the platform in front of the cave hole 250 meters high. After three minutes of ascent, it landed on the platform.

Continuously they brought new blocks to the meadow, and the monks using this method transported 5 to 6 blocks per hour on a parabolic flight track approximately 500 meters long and 250 meters high. From time to time a stone split and the monks moved the split stones away.

I’d love to think that something like this is possible and that ancient civilizations may have used technologies that made their job easier.

I feel compelled to believe that stones such as those at Göbekli Tepe were not quarried with sticks and stones. People already then were in possession of artifacts—misunderstood today—that made it possible for them to move and position megalithic structures.