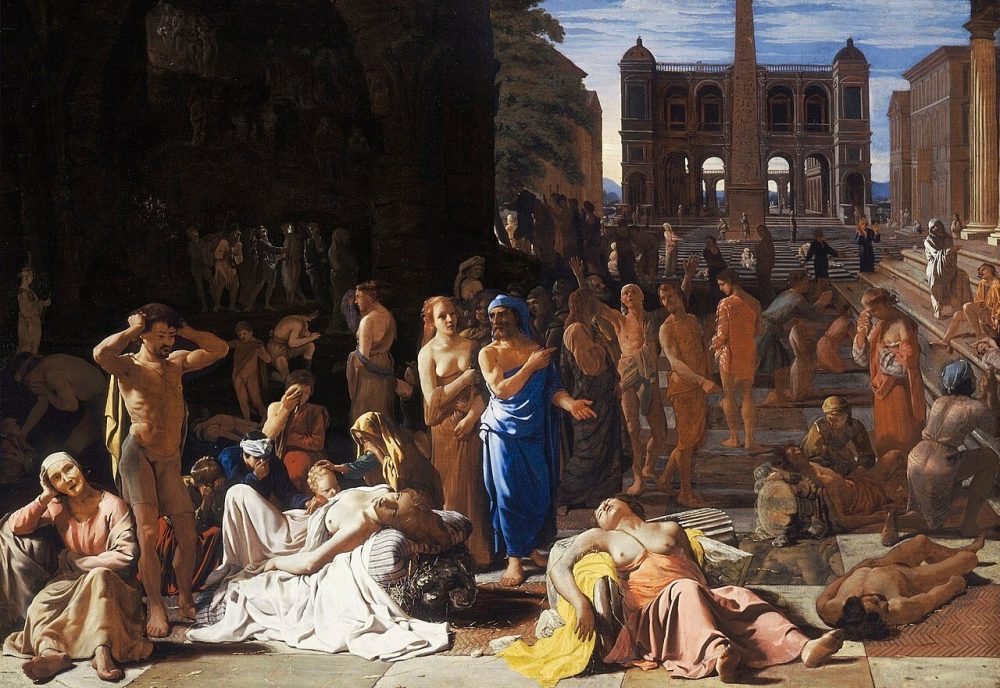 The first documented plague in history hit Athens in 430 BC, destabilizing the powerful Greek polis during the Peloponnesian War with Sparta.

The first major epidemic in history with documentary evidence (for example, in the stories of the ancient Greek historian Thucydides, who himself had the misfortune of being ill) was recorded in 430-426 BC and is commonly known as the Plague of Athens.

It is generally accepted that Athens was overwhelmed by the bubonic plague – a deadly infection that subsequently mowed down the population of the Earth more than once or twice with terrifying fury.

But there are other points of view, based both on the analysis of the DNA of the victims of the epidemic and on some indirect data: scientists assume that the Athenians suffered not from the plague but from typhoid fever. I will go through several alternative opinions at the end of this article.

The epidemic began in the second year of the Peloponnesian War (431-404 BC), which the Athenian naval union waged with Sparta and her allies. Since the beginning of hostilities, the Spartans had chosen aggressive tactics: in the summer for about two to three weeks, they invaded Attica to ravage the fields, burn down the homes, and take the prisoners away.

The Athenians were unable to put up a worthy army against the Lacedaemonians (the fleet was always considered the strength of Athens), and therefore they hid behind the city walls.

When the Spartan army appeared in Attica, the inhabitants hastened to hide behind the high walls of Athens. And, of course, no one suspected that beyond these walls a misfortune awaited them, much more serious than the rage of the Spartans.

The infection sailed from Egypt

The infection entered Athens through Piraeus – at that time the largest port not only of Hellas but of the entire Mediterranean region. Merchant ships from Egypt were arriving regularly.

The first to get sick in Piraeus were the sailors, followed by the port workers, and then off we go. Soon, the epidemic was already in full swing in the overcrowded city.

“The disease hit Athens suddenly and first of all struck the inhabitants of Piraeus,” writes Thucydides, “which is why the Athenians said that the Peloponnesians had poisoned the cisterns there; there were no aqueducts at that time in Piraeus. Subsequently, the disease reached the upper city, and people began to die. already in a much larger number. “

To the Spartans, information about the terrible deeds happening in Athens, of course, reached quickly and that summer they interrupted the robberies, collected spears and hoplons, and hastened to leave Attica.

The rural population was able to return to their olive groves, but it was too late – the epidemic spread to the countryside. But, what is interesting and even somewhat unusual, the matter was essentially limited to Attica.

Nothing is known about the spread of the disease to neighboring Boeotia or the Peloponnese, and this fact, among others, casts doubt on the version that Athens was overwhelmed by the bubonic plague, for which borders did not exist.

But the Athenians, despite the raging epidemic, made military campaigns. It is known that after one of such campaigns, the army of the Athenians lost fifteen hundred hoplites in their ranks. Not from enemy swords and spears, but from the disease. And if they really were sick with the plague, they would flare up all over Greece, and there, you see, all over the Mediterranean.

In Athens, the infection raged for about four years, flaring up and then dying out, spared neither the poor, nor the rich, nor pious citizens, nor lost sinners. For the latter, by the way, a dangerous, but at the same time, happy time had come.

Thucydides writes that there has never been such rampant immorality and such violation of laws in Athens.

The result of the epidemic for Athens was catastrophic – the disease mowed down about 30 thousand people, about a quarter of the total population of the city.

The strategist Pericles became a victim of the epidemic, during which the war with the Peloponnesian Union was developing more or less favorably for Athens. They were able to recover only 15 years after the outbreak of the epidemic. But Pericles was no longer there, no worthy personalities were found to replace him, and Athens ultimately lost the Peloponnesian War with a crash.

Of course, nobody considers the plague as the main reason for the defeat, but it is an absolute fact that it contributed to the outcome.

Alternative theories about the nature of the Athens plague

Before I finish this article, I should also mention that there are several opinions about the actual disease. Many experts argue that there was never bubonic plague in Athens. According to them, ancient historians called every mass illness a plague which is correct to a certain extent. Here are the other most plausible diseases besides the bubonic plague according to modern historians.

1) Typhoid fever, which corresponds to the symptoms described by Thucydides and explains the small area of ​​the epidemic. In addition, molecular genetic studies have shown the presence of traces of typhoid salmonella DNA in the remains of victims of the epidemic.

2) Currently unknown disease, whose pathogen has died out or mutated over the past 2.5 thousand years.

3) Hemorrhagic fever (such as Ebola), since the disease came from Egypt (and the regions of the middle and upper Nile have long been known breeding grounds for Ebola-like fevers) and many of the symptoms and consequences described by Thucydides were excellently seen in Ebola victims during the 2012-14 outbreak in Sudan and Zaire.