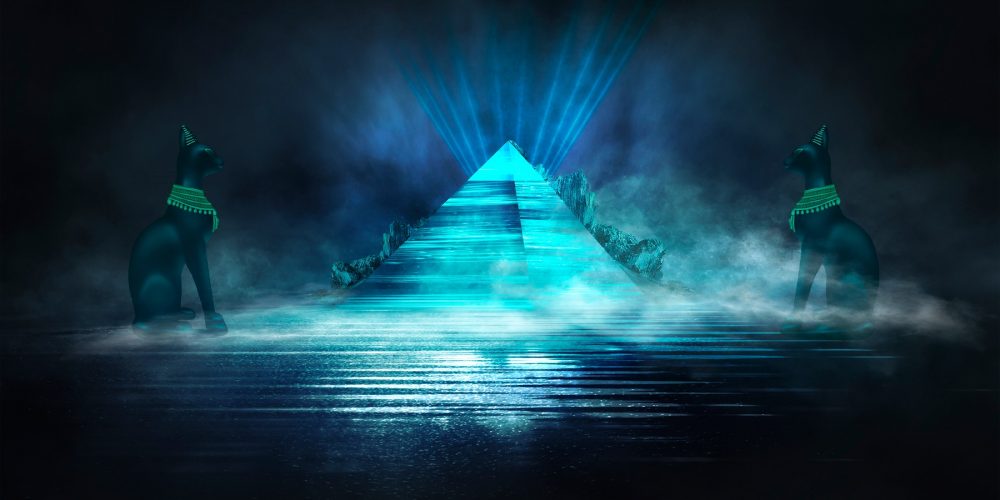 There are around 120 pyramids in Egypt and not one ancient text exists that tells us how they were built without technologies and tools such as the pulley, wheel or iron tools.

If you were to ask a world traveler of all the ancient monuments on Earth, which made the strongest impression, it is most likely that he will reply “the Pyramids of Giza.”

The reasons as to why may differ; one person will admire their colossal scale, while another the architectural perfection of the pyramids. A third would say that their antiquity alone baffles the mind.

Therefore, it is unsurprising that whenever the pyramids are brought into context, that of Khufu–the Great Pyramid of Giza–comes to mind.

But the Great Pyramid of Giza is just one of the many pyramids that were built during Egypt’s long, ancient history.

Egyptologists have argued that the Egyptian pyramids were built originally as tombs for the Kings.

According to Egyptologist Ahmed Fakhry, the earliest of such tomb can be traced back to the royal necropolis of Saqqara.

Saqqara and the first pyramid

It was there, around 2,780 BC, and during the reign of Third Dynasty Pharaoh Djoser, that ancient Egyptian architecture was greatly changed.

All of a sudden, and totally abruptly, the pyramid-shaped building was born in Egypt. With the reign of Djoser, a new page in Egyptian architecture was written.

Although Djoser is believed to have followed the tradition of his predecessors by building a royal, mud-brick mastaba, for reasons that remain unclear, the Pharaoh chose Saqqara as the place where his second monument was to be built.

Among Djoser’s royal officially was a young architect called Imhotep, who came from a family of architects and builders. Imhotep’s rare and revolutionary visions were recognized by the King, who would go on and hive him free hands in building what would become a super-structure at Saqqara.

Eventually, the young architect would build what is considered the earliest colossal stone building in Egypt and the earliest large-scale cut stone construction.

The social implications of building a structure of that size are staggering. In fact, the process of building the pyramid complex at Saqqara was far more labor-intensive than any previous monument built in Egypt.

But that what lies above the surface is just a small part of the superstructure beneath the ground.

Not only did the builders manage to build a fascinating pyramid complex beneath the Step Pyramid, but they also crafted an underground structure on a previously unknown scale; they somehow managed to quarry out more than 5.7 kilometers of shafts, tunnels, chambers, galleries, and magazines, creating an unprecedented complex buried beneath the ground.

Once completed, the entire pyramid complex of Saqqara was a monument like no other in Egypt, and people were left awestruck by its sheer size and intricate elegance.

However, while later generations of rulers borrowed many specific elements, the rectangular pyramid complex did not endure despite its importance.

After Djoser came, Sekhemkhet who also turned to Saqqara in an attempt to build another such complex. However, this was abandoned soon after it was begun. Today the structure dubbed the Buried pyramid lies southwest of Djoser’s mighty structure. Had this pyramid been completed, scholars argue it would have risen to a height of around 70 meters, having one step more than the Step Pyramid of Djoser.

The Layer Pyramid of Zawyet El Aryan marks another attempt of a third dynasty ruler to build a structure like that of Djoser. However, just as that of Sekhemkhet, the pyramid was never finished.

Had this structure been completed, experts argue it would have risen no more than 45 meters, totaling five superimposed steps.

From Saqqara to Meidum

Meidum is in many ways one of the most mysterious pyramids ever erected in Egypt. Scholars argue that this pyramid contains traces of distant events that transformed Archaic Egypt into the classic old Kingdom pyramid Age, kickstarting construction processes of unseen magnitude.

Sneferu was Egypt’s first Pharaoh of the Fourth Dynasty and the greatest pyramid builder in the history of Egypt. He built three massive pyramids, the one at Meidum and two at Dahshur resulting in a total mass of stone that exceeds even that of his successor and son, Khufu.

The Pyramid Meidum, although in ruins today–offers great insight into the evolution of pyramids in Egypt. Like Djoser, the builders at Meidum followed the footstep of Imhotep, building the pyramid in stages. The Pyramid at Meidum was constructed having seven steps.

Scholars argue that as the fourth step of the pyramid was completed, the builders decided to enlarge the pyramid, adding one additional step to the structure.

The Pyramid at Meidum was left as it was, and Sneferu turned to Dahshur, where he commissioned another pyramid, the Bent Pyramid of Egypt.

The Bent Pyramid represents a unique example of early pyramid development in Egypt.

This pyramid is unique because of its appearance: it rises from the plateau at a 54-degree inclination. However, just above 47 meters, the builders changed the pyramid’s slope to a much shallower angle of 43 degrees, giving the pyramid its obvious bent appearance. The Bent pyramid is also unique because most of its original polished limestone outer casings remain largely intact.

The Bent Pyramid is regarded as the third completed pyramid in Egypt. Yet, up until this pyramid, not a single ancient document has been found that mentions how these revolutionary structures were built.

Archeologists had not found one single piece of written evidence that details how, why, and when exactly the builders chose to erect Egypt’s first pyramid.

Not one ancient text has been found describing the exact materials, tools, and methods by which the pyramid of Djoser was built.

This strange absence of records continues with Sneferu.

After the Pyramid at Meidum, Sneferu turned to Dahshur, where he commissioned the Red Pyramid. It became the third-largest at Dahshur and is regarded as the first successful attempt at constructing a true smooth-sided pyramid in Egypt.

Though to have been completed in no more than 17 years, the Red Pyramid of Sneferu is thought to have laid down the necessary foundations and guidelines for constructing the Great Pyramid of Giza.

Despite the importance of the Red Pyramid, the first true smooth-sided pyramid in Egypt, not one record has been found that explains the processes and transformations that lead to its completion. Moreover, there is a complete absence when it comes to tracing down the origins of the pyramids in Egypt; not one ancient text dating from the time the pyramids were built has been found in Egypt.

This mystery continues right until the peak of pyramid-building in Egypt. Then, as Khufu took the throne, he is thought to have commissioned a pyramid similar to no other.

Allegedly completed in no more than 20 years, the Great Pyramid of Giza marked Egypt’s zenith of pyramid building.

Furthermore, it is Egypt’s only known eight-sided pyramid and the only pyramid with both ascending and descending passages.

Scholars have calculated that the builders used 5.5 million tons of limestone, 8,000 tons of granite (imported from Aswan), and 500,000 tons of mortar to build the Great Pyramid.

All of this was achieved when the pulley, the wheel, and even iron tools were unknown in Egypt, and not one ancient text has been found that tells us how this is possible.