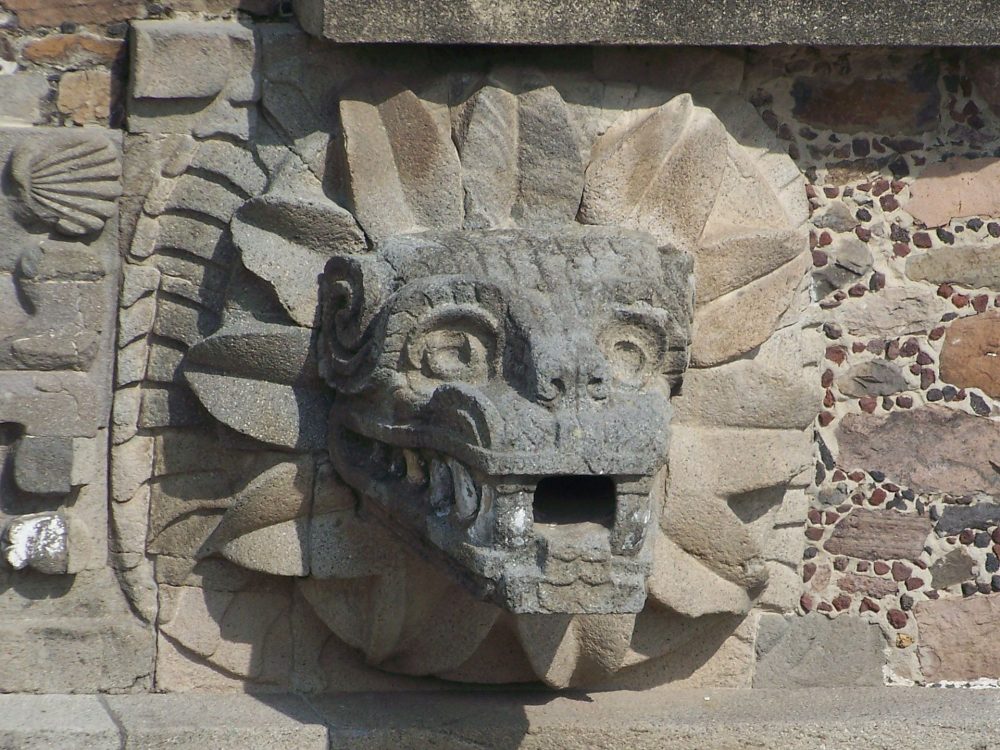 Also known as Quetzalcoatl among the Aztec, the feathered serpent was one of the most important ancient Mesoamerican deities. Surviving texts from the ancient Maya specifically explain that this deity came by sea from the west.

Among ancient civilizations such as the Maya, Aztec, and other pre-Hispanic cultures, Kukulkan (Quetzalcoatl) is manifested as a deity with various motifs, forms, and legends among which his form of a flying feathered serpent is the most famous and whose cult is one of the most relevant in Mesoamerica.

The worship of Kukulkan (with the Maya) is profoundly related to the worship of wind and water. His ancient Maya name—Kukulkan can be translated as the Feathered Serpent.

The stories describing Kukulkan, his teachings as well as his appearance and disappearance have left a profound mark in the history of the Yucatan Peninsula and the Maya culture.

Although Kukulkan and Quetzalcoatl had many similarities, they also had differences, but these were likely due to the climatic differentiation between both regions. In this sense for the ancient Mexica people, Quetzalcoatl was the Lord of the scorching Sun. But the climate in Yucatan greatly varies from that of Central Mexico. Yucatan and Guatemala have a predominantly tropical climate which is expressed by thunder, lightning, and rain.

The worship of the featured serpent can be tracked long before the worship of Quetzalcoatl and Kukulkan of the Aztec and Maza civilizations, to one of the oldest civilizations in Mesoamerica, the ancient Olmec. Archeological evidence suggests that the earliest representations of the feathered serpent worshiped by the Olmecs date back to around 1400–400 before Christ.

Although many ancient Maya texts were burned during the Spanish conquest, according to the testimonies described by Diego de Landa, the Maya believed that Kukulkan existed as a person who arrived from the west, before, after, or at the same time that the Itza people—native to the Péten region of northern Guatemala and parts of Belize—arrived at Chichén Itzá.

Curiously, Quetzalcoatl is described in a similar fashion: the Aztec-version of the feathered serpent is represented as the conqueror who came to Yucatán by sea from the west, towards the end of the 11th century.

What is more, Kukulkan was not regarded as a pure deity but as someone who came from far away, bringing progress, education, and technology to the Maya people. In essence, some refer to Kukulkan in a similar fashion as to South American deity Viracocha, who is also said to have come from far away, bringing great progress, teachings, and technology to the people of South America.

In a sense, Kukulkan was different from other deities worshiped by the Maya. Surviving texts from the ancient Maya specifically explain that this deity came by sea from the west, towards the end of the eleventh century, and became the leader and founder of their civilization.

In a sense, it can be said that the Kukulkan / Quetzalcoatl cult was the first Mesoamerican religion to transcend the ancient linguistic and ethnic divisions of the Classic Period.

Some archeologists believe that it was thanks to this cult, which by then was strongly imprinted in the Maya society, that communication and peaceful commerce between peoples of different social and ethnic origins was made possible. Worshipping a common deity facilitated agreement among people, allowing different cultures to progress instead of regress.

Evidence of this can be seen throughout Central and South Mexico, and all the way to present-day Guatemala and Belize.

Although the worship of the feathered serpent was greatly centered in the pyramid city of Chichen Itza, motifs of the worship of Kukulkan and Quetzalcoatl can be found in the ancient city of Teotihuacan, and in many other Maya centers throughout Belize and Guatemala.

Kukulkan was a deity said to have brought great progress to his people, but at Chichén Itzá, Kukulkan is also represented leading sacrificial scenes. His importance is well-attested through a plethora of ancient temples and pyramids.

Structures dedicated to the feathered serpent are found at archaeological sites throughout the northern Yucatán peninsula, such as Chichén Itzá, Uxmal, and Mayapán, but also in central Mexico at the pyramid city of Teotihuacan where the Temple of Quetzalcoatl stands to this day.

This temple, also referred to as the Pyramid of the Feathered Serpent, was one of the most beautiful buildings not only in Teotihuacan but also in pre-Hispanic Mexico.

El Castillo and the feathered serpent

However, to me, the most impressive monument built honoring the Feathered Serpent is located in the Yucatan Peninsula, in Chichen Itza.

The central structure—the Pyramid of El Castillo—pays worship to one of the most important ancient Maya deities in history.

What makes this ancient monument stand out from the rest is the fact that during the spring and autumn equinoxes, the shadow cast by the angle of the sun and the edges of the nine steps of the pyramid combined with the north staircase and the stone carvings of the serpent’s head create the illusion of a huge serpent that descends from the pyramid. Millions of people travel to Chichen Itza to witness this spectacle.

According to ancient texts, Kukulkan had a long and truncated nose, like that of a tapir. He walks on water, wields burning torches, and sits on the cruciform tree of the four winds that so often appears in American myths.

He evidently is a god of agriculture, knowledge, progress but also a hero, since numerous depictions show him planting corn, carrying tools, but then continuing a journey, a fact that establishes his solar connection.

Among the Olmec people, the feathered serpent was depicted as a crested rattlesnake, sometimes with feathers covering the body and legs.

The 10 about the Feathered Serpent

So what exactly do you need to know about this extraordinary deity? Here’s our ten:

Kukulkan was venerated by the Maya, and Quetzalcoatl by the Aztec and Toltec cultures. Both these deities are practically the same; feathered serpents.

Kukulkan is a Yucatec Maya name that can be translated as Feathered Serpent. (in Maya: k’uk’ulkan, means “feather and serpent.”

Quetzalcoatl, on the other hand, is a Nahuatl word that can be translated to “Precious serpent” or “Quetzal-feathered Serpent.”

The presence of the feathered serpent as a deific symbol is omnipresent throughout Mesoamerica.

In the Popol Vuh, the sacred book of the Maya, the K’iche’ feathered serpent god Q’uq’umatz is the creator of the cosmos. This fact reaffirms the importance of this Mesoamerican deity.

At the archaeological site of Chichén Itzá, the image of Kukulkan is depicted in the form of a snake that moves across the stairway of the Step Pyramid. This is as an effect of light and shadows that takes place during the equinoctial day of March and September; a shadow of a “snake” descends from the top of the main staircase of the building.

Many structures were built honoring Kukulkan, and Quetzalcoatl the feathered serpent. The most prominent structure built in his honor is the pyramid of El Castillo at Chichen Itza.

But other structures exist as well. Another fascinating example is the Temple of the Feathered Serpent at the pyramid city of Teotihuacan.

What is perhaps most interesting is the description given by the Maya on Kukulkan; it is said that Kukulkan existed as a person who came from the west.