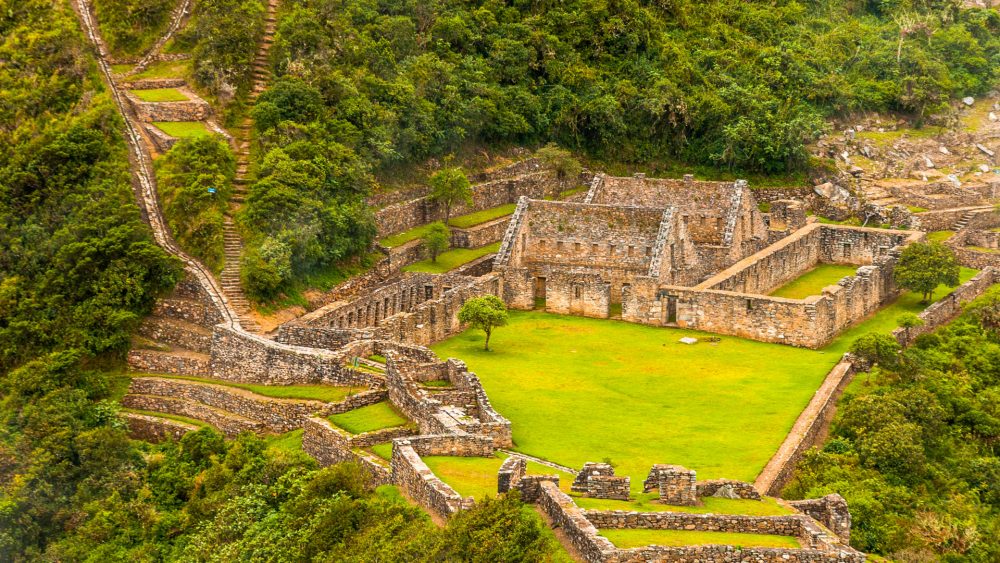 Machu Picchu may be fascinating and the site that people usually think of when they hear about Peru but to me, there are lesser known archaeological sites of equal or even greater significance that should not be overlooked.

I do not understand at all why the historical significance of Peru is often overlooked when compared to other cradles of civilization such as Egypt or the Mesopotamian region as a whole. Therefore, have selected 5 significant archaeological sites in Peru that you may or may not have heard of, omitting the obvious most popular places like Machu Picchu.

Chavin de Huantar is an ancient complex of older and newer temple buildings dating back to 1200 – 500 BC. In the center of the complex, there is a large central square, deepened in relation to the ground level. The entire territory of the settlement is covered by a well-thought-out system of canals from an engineering point of view, which served as a drainage system.

If you follow the staircase that begins at the square, you will reach the remains of the ancient castle, and beneath it, is a maze of tunnels and chambers that are nowadays considered an architectural wonder.

Caral was the 5000-year old capital of the ancient civilization of Norte Chico. The Caral complex consists of a central public area with six large pyramidal structures located around a huge square. The largest of the pyramids is 18 meters high, and its base is as many as four football fields. From the top of the great pyramid, the rulers of Caral could see the whole city.

A wide staircase leads to a number of small rooms, including an altar. There is a small opening in the floor of the altar where, according to scholars, sacrifices were made. The public architectural facilities have stairs, rooms, courtyards, the city has an amphitheater and three squares.

At the top of the pyramids were rooms for the elite. It is estimated that the population of Caral was about 3,000 people. Researchers believe that the model of the city was subsequently used by many civilizations.

Kuelap is believed to have been a fortified citadel built by the Chachapoya culture. They were also known as the “cloud warriors” and were a tribe that inhabited these lands before the Incas. According to archeological finds, the fortress was built around the 6th century AD and was used until about the 16th century.

Because of the strategic location of the structure and because of the massive stone walls (in places up to 20 meters high and with an average thickness of 80 centimeters), Kuelap is often called a fortress, assuming that the place had a military function.

Perhaps it was intended to protect the Chachapoyas from hostile neighbors. But the walls enclose an area of ​​almost 65,000 square kilometers. Between them were found not only military buildings but also religious, public, and residential buildings. It is also estimated that up to 300,000 people lived there at their peak, which could not be just warriors – there were probably shamans, merchants, farmers. Therefore, it may be more correct to call Kuelap not a fortress but a city.

This archaeological site in Peru is located just outside Cusco. It is one of the most significant cities in the Sacred Valley of the Incas. It spreads on the hills around the modern village of Pisac and represents an interesting combination of different cultural layers from the moment of the city’s transition from a military fortress to a religious center.

Pisac is a fortress built in several stages or levels as it was common for the Incas. The most beautiful element of Pisac, I would call the Temple of the Sun. Around it are the remains of houses with ancient masonry, which amaze with their harmony and appropriateness. It is a pity that at the present stage we do not build such buildings.

Choquequirao is known as the second “lost city of the Incas” after Machu Picchu. Choquequirao is translated from Quechua as “Golden Cradle”. In terms of its importance, this city is close to Machu Picchu. Choquequirao is famous for the fact that, due to its favorable position, for a long time served as a shelter for Manco Inca Yupanqui who led the Inca resistance to the Spanish conquerors. All approaches to the city were perfectly visible, which prevented the Spaniards from reaching Manco Inca.
Although Choquequirao was already mentioned at the beginning of the 18th century, excavations there only began in 1970. So far, about only 40% of this major archaeological site in Peru has been excavated. While it is often called the second Machu Picchu, it was built in a completely different style and covers a significantly larger area.
The past few years saw a huge increase in tourist interest in visiting Choquequirao but still, it has a long way to go before it reaches Machu Picchu which is easily accessible. Choquequirao, however, requires a long and exhausting hike that usually takes three days minimum, following the Inca Trail. There is no other way to reach the city which is what usually stops people from visiting it.
Join the discussion and participate in awesome giveaways in our mobile Telegram group. Join Curiosmos on Telegram Today. t.me/Curiosmos