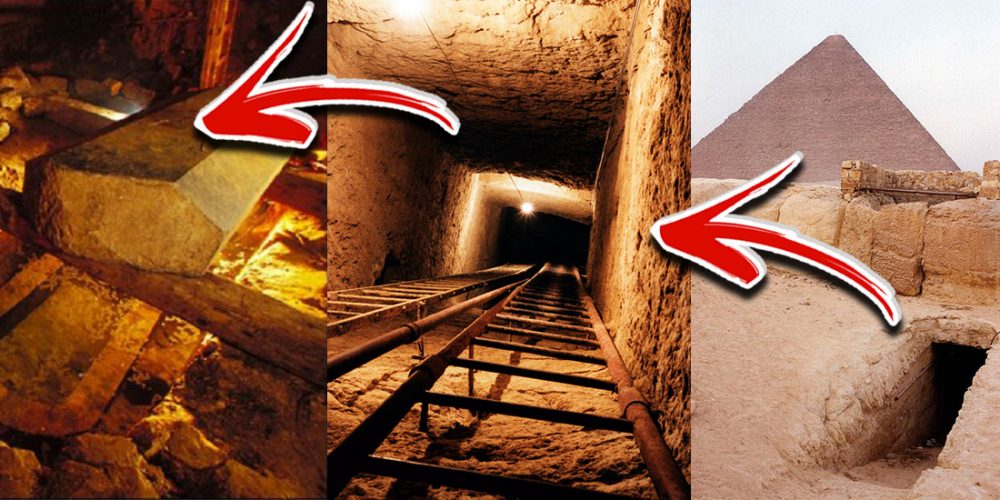 Beneath the Pyramids of Giza, there is an entire "ancient world" waiting to be explored.

Egypt; the land of Pharaohs and Pyramids, the land of Mysteries. Egyp is where myths and legends are part of everyday life.

That’s why you have to know that there’s more to Egypt than the Pyramids and the Sphinx. Describing all of the ancient treasures Egypt houses today would be a difficult task.

But describing one in particular, which not many people know of, is perhaps easier.

Called the Tomb of Osiris or the Osiris Shaft, there’s a massive chamber located beneath the Pyramids of Giza.

Located underneath the stone causeway of Khafre’s Pyramid is a massive three-story chamber built into the subterranean world below the pyramid.

It is a structure intricately carved with three levels.

And despite the fact we’ve known of its existence for a very long time, the shaft has never been properly explored and studied. That is until now.

Egyptologist Selim Hassan, who wrote the 16-volume Encyclopedia of Ancient Egypt in Arabic and supervised the excavation of many ancient Egyptian tombs under the auspices of Cairo University, was one of the first to explore the Osiris shaft in the 1930s.

Despite this, only in 1999 was the structure fully excavated by  Zahi Hawass. Previously, the shaft was filled with water, and hundreds of years ago, people used to swim inside it.

But by 1999, the water levels retreated, making the excavation possible.

“Upon the surface of the causeway, they first built a platform in the shape of a mastaba, using stones taken from the ruins of the covered corridor of the causeway. In the centre of this superstructure, they sank a shaft, which passed through the roof and floor of the subway running under the causeway to a depth of about 9.00 m. At the bottom of this shaft is a rectangular chamber, in the floor of the eastern side of which is another shaft. This descends about 14.00 m. and terminates in a spacious hall surrounded by seven burial-chambers, in each of which is a sarcophagus. Two of these sarcophagi, which are of basalt and are monolithic, are so enormous that at first, we wondered if they contained the bodies of sacred bulls.”

The underground structure is composed of three main levels. The first level was found to be empty.

The second level of the shaft leads the way to a room where six chambers carved out of stone are located.

During the exploration of the shaft, it has been reported that basalt sarcophagi were found in Chambers C, D, and G. The sarcophagi in chambers C and G held badly decomposed skeletal remains. The sarcophagi are thought to date back to the 26 dynasties of Egypt.

Then, some 30 meters below the surface, there is a mystery that was described by the Greek historian Herodotus.

The lowest chamber of the Osiris shaft is actually a kind of subterranean hall.

This was recorded by Herodotus in ancient times but was written off as a myth by modern scholars.

However, it turns out that the Greek historian was right all along.

Inside the subterranean chamber, there is a stone sarcophagus perfectly preserved and empty. Near the sarcophagus, archeologists recovered pottery fragments that have been dated back to Egypt’s sixth dynasty.

Based on this and other evidence, experts have concluded that the lowest levels of the subterranean chamber date back to the Old Kingdom, more precisely to the Sixth Dynasty (2355-2195 BCE).

According to Hawass, the shaft complex itself is completely uninscribed.

However, as noted by Hawass, after moving the sarcophagus lid, researchers discovered inscribed in the ground the hieroglyphic word “pr,” which means”house.”

It is known that the Giza plateau was once called “pr wsir nb rstaw,” or “the house of Osiris, Lord of Rastaw.”

“Rastaw” is believed to refer to the underground tunnels, and most likely, the plateau’s name reflects the tunnels inside the Osiris Shaft.

The chamber was opened to the public for the first time in 2017.