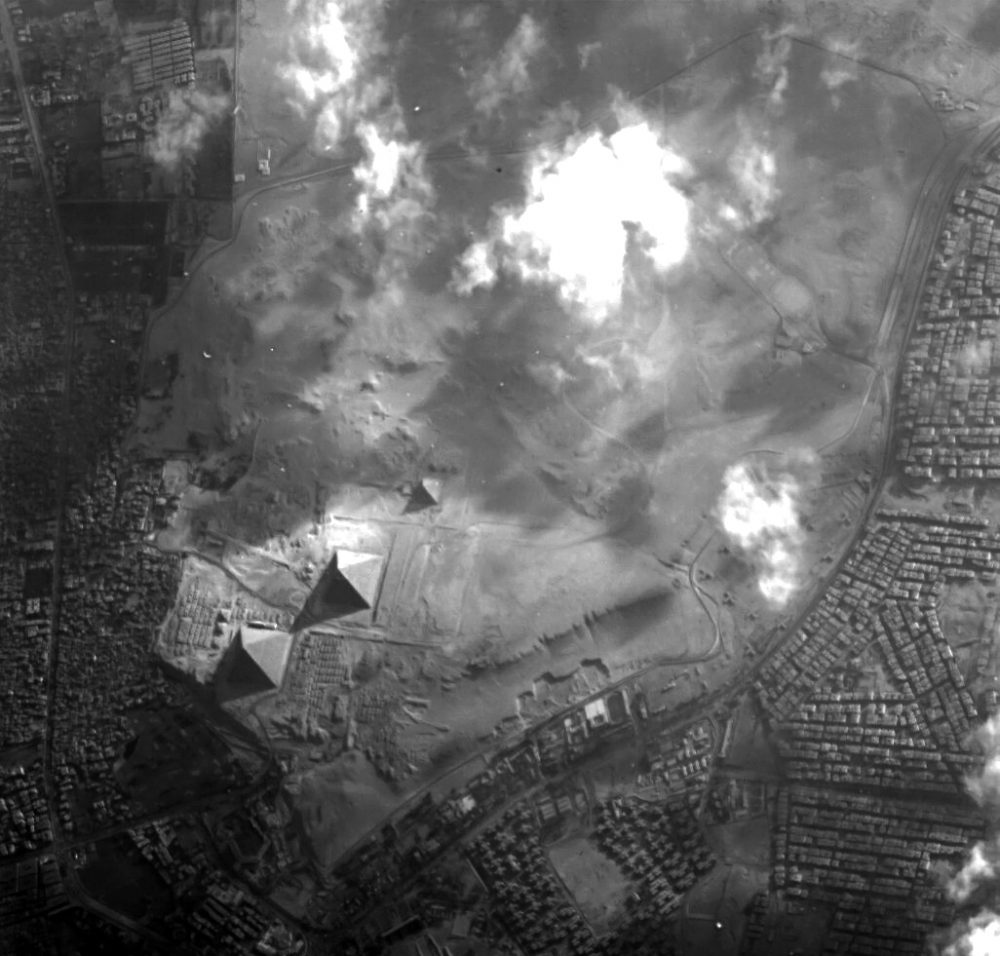 The Ancient Egyptian Pyramids as seen from Space.

Many people who visit Giza today are perplexed by the Pyramids’ enormous size, notably the Great Pyramid. Others are overwhelmed by the size of the pyramids and their mind-bending precision and aesthetically pleasing architecture.

Many others are left awestruck by their antiquity and history, but there are also those who fall in love with the pyramid because they are shrouded in mystery.

The massive pyramids are striking, looming against the sky, uniting heaven and Earth. It’s as if, somehow, the pyramids were massive portals combining what is above to that which is below.

The Pyramid in Egypt

In every sense, the pyramids are an ancient masterpiece. A piece of art. Evidence of a time long gone, of history buried beneath the golden sands.

The origins of pyramids can be traced back to Djoser’s reign and the Step Pyramid of Saqqara, the first stone pyramid of Egypt.

Djoser’s pyramid was designed by architect Imhotep that laid the foundations for future pyramids.

The beginning of the construction of pyramids was abrupt, and we could say that it sprung out of nowhere. All of a sudden, pyramids were starting to be built.

But after the successful completion of the Step Pyramid, many years went by until a pharaoh managed to complete another pyramid. There were numerous attempts along the way, but it wasn’t until Pharaoh Sneferu came to the throne that the pyramid building expanded in Egypt, taking off to a whole other level.

The truly massive stone pyramids of Egypt are believed to have been built over three main generations: Sneferu, Khufu, and Khafre.

Sneferu built three pyramids, two of which were critical structures that would lay down the foundations for constructing the Great Pyramid.

The Bent Pyramid at Dahshur was the first successful “True Pyramid” heralding the age of Smooth-sided pyramids of Egypt.

Sneferu’s Red Pyramid at Dahshur signalized the birth of the massive true pyramid and showed the builders of the Great Pyramid of Giza how the job needed to be done.

Sneferu’s architect was responsible for developing the Great Pyramid of Giza greatly since it showed future generations how smooth-sided pyramids needed to be built, both in engineering and architecture.

Sneferu’s three pyramids were impressive on many levels, but mostly because all three pyramids commissioned by Sneferu contain more than 3.5 million cubic meters of stone. This means that all other pyramids of Egyptian Pharaohs combined (excluding satellite and queens’ pyramids) contain only 41 percent of the total mass of the pyramids built by Sneferu, his son Khufu and grandson Khafre.

The pyramids built by Sneferu, his son, and his grandson would remain as the biggest and most impressive ever built in ancient Egypt. Not one pharaoh after or before them managed to build such massive structures ever.

The completion of the Great Pyramid of Giza marked the zenith of ancient Egyptian pyramid building. Building a pyramid as giant as the one Khufu supposedly commissioned was impressive for a number of reasons.

First of all, never had such a massive pyramid ever been attempted to build.

The project required an abnormal amount of material. Some of the stones used in the pyramid’s construction—weighing over 20 tons—were quarried and transported as far away as Aswan, around 800 kilometers away from where the pyramid was being built.

The pyramid builders are believed to have used 5.5 million tons of limestone, 8,000 tons of granite (from Aswan), and more than 500,000 tons of mortar.

Supposedly, the Great Pyramid of Giza was completed in a period of around 20 years.

But everything we know (facts) about the pyramid is mostly guesswork and theory.

To date, not a single ancient document has been discovered that mentions how, why, or when the Great Pyramid of Giza was built.

No historical text has been found that speaks of the Great Pyramid of Giza or its true purpose.

Egyptologists believe Egypt’s pyramids were tombs, although the three largest pyramids ever built; The Red Pyramid (Sneferu), the Great Pyramid, and the Pyramid of Khafre were all empty when scholars entered them in search of the mummies of the Pharaohs.

Egyptologists say that the contents of the pyramids were most likely looted thousands of years ago, the reason why all of them are empty.

But of all the mysteries concerning Egyptian pyramids, perhaps the biggest one is their construction.

Even the Roman writer Pliny, who condemned the massive structures as an “idle and foolish exhibition of royal wealth,” admitted that pyramids were peculiar and that “the most curious question is how the stones were raised to such a great height.”

What is even more impressive is that it is believed that all the ancient Egyptian pyramids were supposedly built with the most straightforward methods. Even the pulley was unknown in Egypt before the Roman period.

Egyptologists are convinced that both for quarrying and building, the ancient builders most likely used copper chisels and likely flint, quartz, and diorite tools.

In other words, using the most primitive of tools, Egyptologists say that the ancient Egyptians built structures that are so massive, they are even visible from space.

The Pyramids from space