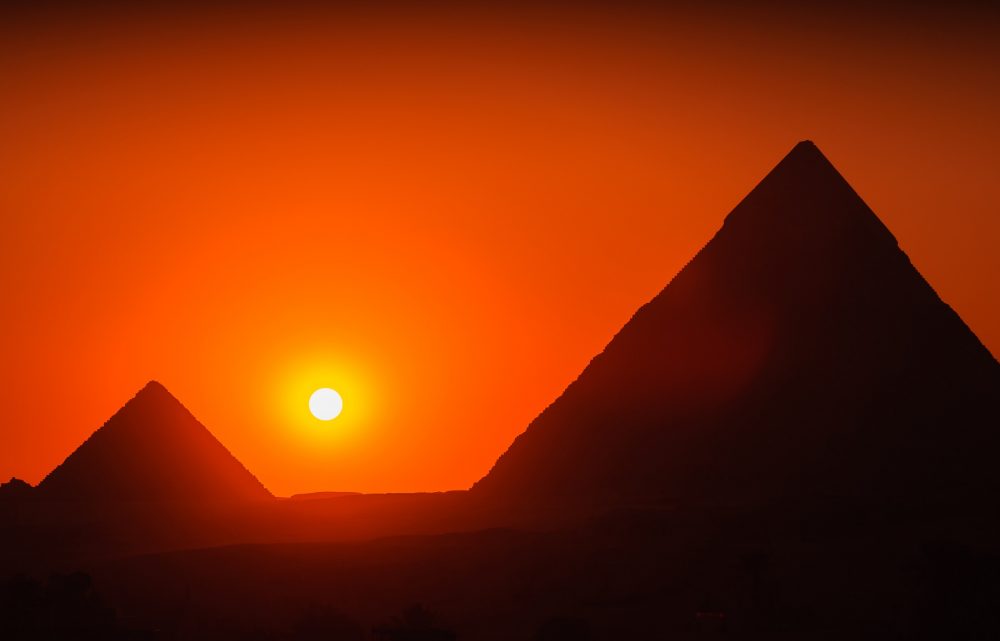 The Great Pyramid of Giza: Thousands of years worth of mystery.

The Great Pyramid of Giza is a monument like no other. It has survived (according to mainstream history) more than 4,500 years since its completion, withstanding the forces of nature and control of different civilizations. As a result, it has remained, to this date, the only standing ancient wonder of the world.

The road to its completion was a long one and involved the entire history of ancient Egypt. The Great Pyramid of Giza results from a long line of architectural and religious innovations that slowly manifested themselves within the ancient Egyptian civilization, beginning as early as pre-Dynastic Egypt.

Slowly but surely, around the reign of Pharaoh Djoser, the ancient Egyptians left behind lesser structures and started using them in a more frequent manner stone. Thus, Djoser revolutionized ancient Egyptian building styles, and ancient Egypt took its first steps towards producing superstructures made of stone.

Eventually, the royal Vizier Imhotep, Pharaoh Djoser’s royal architect, would design a structure never before attempted in ancient Egypt. It was a kind of stepped mastaba, rising high into the air. It was a building like no other, and it officially gave rise to the Age of Pyramids in ancient Egypt.

After the completion of the Step Pyramid of Djoser were countless pyramids. Some of them were a total success, while others were a failure.

The ancient Egyptians experimented with different angles, different stones, and mortars. As a result, they changed the way pyramids looked and elaborately developed their complexes built around the pyramid.

And evidence of that evolution can be found if we look at the collapsed pyramid at Meidum. What started as a step pyramid, as introduced by Djoser, was changed into a kind of true pyramid shape, where the pyramid was redesigned from a step pyramid to a smooth-sided one. The structure at Meidum failed.

But the next few pyramids are evidence of ancient Egyptian ingenuity.

The Bent Pyramid built under the reign of Pharaoh Sneferu is the most unique example of early pyramid development in ancient Egypt. This structure was initially envisioned with a 54-degree inclination, but due to the extreme steepness of the structure, which may have compromised the structural integrity of the pyramid, the ancient builders constructed the top of the pyramid with a much shallower angle of 43 degrees, giving the pyramid its very obvious ‘bent’ appearance.

The Pyramids that followed were more sophisticated and better in terms of quality and design.

The pyramid that Sneferu built after the Bent Pyramid was the so-called Red Pyramid or Northern Pyramid. Once completed, it was the largest pyramid ever built in ancient Egypt. Eventually, Khufu became Pharaoh of Egypt, and he started the construction of a building that would forever be imprinted in the history of humankind; The Great Pyramid of Giza, aka Khufu’s Great Pyramid.

The story of Khufu’s Great Pyramid

Sneferu’s Great Pyramid was the largest pyramid on Earth when it was completed by the Old Kingdom Pharaoh Sneferu just a kilometer tom the north of the Bent Pyramid. Estimated to have been completed in around 17 years, the Red Pyramid is 105 meters high.

Then came Khufu, and the Age of Pyramids of ancient Egypt reached its peak.

According to mainstream archaeologists, Khufu wanted to surpass the achievements of his father, King Sneferu. Hence, he commissioned a structure that would remain written in history as the largest the country ever saw.

The Great Pyramid was designed, planned, and construction started. The size of the project was never attempted in ancient Egyptian history, and to complete the pyramid, the ancient builders had to be at their best. Everything needed to work flawlessly and is supposedly done. Egyptologists calculate that the pyramid builders managed to construct the Great Pyramid of Khufu in a record time of 20 years.

Although this chronology is debated, it is the most accepted theory in terms of pyramid building timeframe.

Khufu’s vizier and royal architect, Hemiunu (also called Hemon), is believed by some scholars to be the architect of the Great Pyramid. Once finished, the pyramid is believed to have been 146.5 meters tall, but erosion and the absence of its pyramidion (which has never been found) gives the structure its current height of 138.8 meters. Scholars have calculated that upon completion, the great pyramid was originally 280 Egyptian Royal Cubits tall.

It is mind-boggling to try and imagine the methods and procedures ancient builders went through thousands of years ago to build a behemoth structure like the Great Pyramid.

But when you come to think about it, just as today we plan, design, and calculate before laying the foundations for a building, the builders of the Great Pyramid of Giza had to do the same. You can’t possibly build a structure comprising of 2.3 million blocks of stone without planning ahead.

The pyramid’s precision is another remarkable feature. The accuracy of the pyramid’s workmanship is such that the four sides of the base have an average error of only 58 millimeters in length.

The completed structure had a weight of around 6 million tons.

According to John Romer in his Book “The Great Pyramid, Ancient Egypt Revised,” it is estimated that the ancient Egyptians used 5.5 million tons of limestone, 8,000 tons of granite, and 500,000 tons of mortar to build Khufu’s Pyramid.

Can you imagine the logistical perfection needed to achieve all of this? The approximate 8,000 tons of limestone were transported to Giza, from Aswan, located around 800 kilometers away.

It was an unprecedented attempt, and it was completed resulting in a true wonder of the ancient wonder.

But the beauty of the Great Pyramid resides not only in its exterior but in its interior, which is mysterious beyond imagination.

Although we’ve explored the inside of Khufu’s pyramid in great detail, there are still numerous features that continue eluding us. The pyramid’s original entrance is faced north, around17 meters (56 ft) vertically above ground level and 7.29 meters (23.9 ft) east of the centerline of the pyramid.

The pyramid has three known chambers inside. The lowest chamber was cut directly into the bedrock upon which the pyramid was eventually built but was left unfinished. Thus, most of what we know about the pyramid, its construction, and the Pharaoh, who is said to have commissioned it, comes from the pyramid’s exterior.

The structure’s interior remains shrouded in countless mysteries, and the more we explore, the more it baffles us.

For decades scholars have thought we’ve explored everything there is to explore inside the Great pyramid. But as technology moves forward, so do the tools we have at our disposal to study and analyze the pyramids.

In 2017, researchers reported having discovered a previously unknown, hidden void resembling the pyramid’s Grand Gallery in dimensions. The exact purpose and content of the mysterious chamber inside the pyramid remain a mystery. Researchers have even suggested it is not one but several spaces that appear as one. The discovery is exciting since it is the first larger inner structure that has been identified inside the pyramid since the 1800s.

The details about the mystery void were published in the journal Nature.

Archaeologists have dubbed the find “the discovery of the century.”

The mysterious void was made thanks to the ScanPyramids project, an international archeological mission led by the Egyptian Ministry of Antiquities, launched in 2015. Its goal is to study ancient Egyptian structures using non-invasive methods. The enigmatic cavity within the pyramid, dubbed by experts as “The Void,” is at least one hundred feet long. Some researchers have proposed that it is one of many other hidden chambers inside the pyramid. One of these chambers may even hide the Pharaoh’s mummy, others have ventured out saying.

Although not much is known about the void, we see that it aligns to the Great Pyramid’s upper chambers, installed by its builders to relieve pressure on the king’s chamber below.

In 2015, it was reported that researchers using thermal cameras to scan the Great Pyramid of Giza found mysterious hot spots within the pyramid.

The Egyptian Antiquities Ministry announced that a thermal scan of the three ancient Pyramids at the Giza plateau, in particular, a scan of the Great Pyramid, has revealed unusually higher temperatures in three of the stones of the pyramid, located at the bottom of the structures east wall.

Although the researchers do not know why the thermal anomalies mean or represent, these could indicate either empty areas inside the pyramid or a different composition of the construction materials.

The ScanPyramids project also made discoveries of thermal anomalies.

In addition to mysterious, previously unknown chambers hiding inside the pyramid and areas with thermal anomalies, another sensational and bizarre aspect of the Great Pyramid was revealed when researchers found that Khufu’s pyramid can focus electromagnetic energy.

In 2018, scientists from the ITMO University (Russia) and the Laser Zentrum Hannover (Germany) discovered that the pyramid of Giza focuses electromagnetic energy inside its chambers and well beneath its base, where the unfinished chamber of the pyramid is located.

By calculating the extinction cross-section, scientists were able to estimate how the energy is scattered and absorbed by the structure. Multipole analysis then confirmed that the scattered fields concentrated within the pyramid’s chambers and beneath its base.

The researchers explained in their paper: “Applications of modern physical methods and approaches for investigations of pyramids’ properties are important and productive. It could allow [us] to make discoveries or get new information motivating new interests [in] the pyramids.”